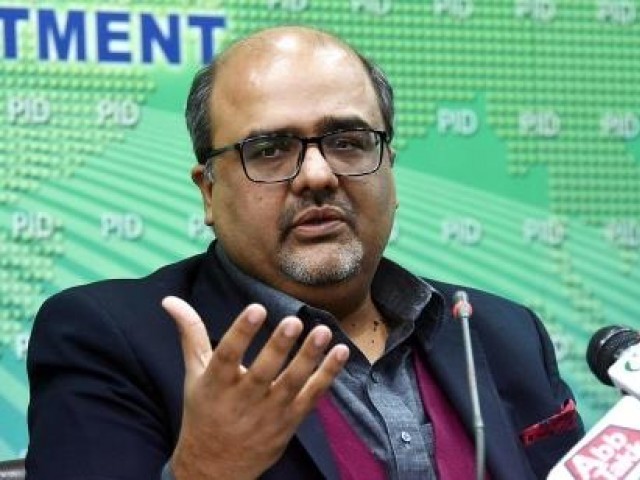 SAPM on accountability says PM Imran has directed all aides to declare the details of their assets. PHOTO: APP/File

ISLAMABAD: The federal government on Thursday shared the details of the FIA-led sugar crisis inquiry commission’s forensic report — a damning document that outlines a series of misdeeds by sugar mill owners.

The alleged fraudulent activities include fudging the production cost to claim subsidies, manipulating the market, underreporting their sales, committing fraud and exploiting farmers.

The sugar barons raked in a “windfall profit” of Rs100 billion during the sugar crisis this year alone.

Addressing a news conference, Special Assistant to the PM on Accountability Shehzad Akbar, accompanied by Federal Information Minister Shibli Faraz, said the federal cabinet had decided to make the report public and it would be shared on the information department’s website soon.

The PM’s aide said commission was set up in the backdrop of a cycle of sugar price hike from December 2018 to August 2019 during which rates of the sweetener went up by 33%, or Rs17 per kg, and then went on to increase this year as well.

“The report shows how a segment of the business community has entirely captured the [sugar] industry… paralysing the system and passing on the burden to the people,” Akbar maintained, adding that it validated Prime Minister Imran Khan’s 22-year-old stance that if businessmen entered politics, they would make profits at the expense of the poor.

The report has disclosed that sugar mill owners were acting as cartels and six major groups held 51% share of the production supply.

Elaborating on the manipulation of the cost of production, the SAPM said the reported had revealed that sugar mill owners paid far less to growers than the support price fixed by the government and showed a higher price in their invoices.

“Their [sugar mills] records show that they bought sugarcane from growers at a price less than Rs140 up till 2019 and then continued to buy at cheaper rate when the government fixed the price at Rs190,” he added.

The report also revealed that almost all sugar mills determined the weight of the sugarcane at around 15% to 30% less than what it actually was.

Some sugar mills also hand over handwritten, unofficial receipts to the farmers instead of issuing a computerised payment receipt (CPR).

In 2017-18, the sugar mills determined their cost of production at Rs51 per kg but the forensic report estimated it at Rs38 per kg.

Similarly, the sugar mills associations determined the price at Rs52.6 per kg while the according to the report it should have been Rs40 per kg. In 2019-20, the price determined by the mills was Rs62 against the rate of Rs46.4 estimated by the commission.

The SAPM also pointed out that after receiving delivery orders, the prices of sugar are manipulated through speculation so that it could be sold at higher rates later.

“This is a sort of gambling. A false perception is created in the market,” he added.

The report has estimated a profit of Rs100 billion windfall profit in the ongoing year alone through speculation.

The PM’s aide said the mill owners were maintaining double books. “There is one account that is shown to the FBR, the SECP etc and one that is prepared for the owner to show them the actual profits.”

The report has further found that the major players in the market did not sell the commodity under their own names. “They are using benami transactions instead to evade taxes,” the SAPM said.
Besides, he added, sugar mills had increased their crushing capacity without approval.

The report had disclosed that in last five years, the sugar industry was granted Rs29 billion in subsidies but they paid Rs22 billion in income tax and the refunds they claimed were Rs12 billion.

Therefore, 88 sugar mills paid a net income tax of Rs10 billion even though they were given Rs29 billion in subsidies.
“Even a manipulation of one rupee in the cost of production generates a profit of Rs5.2 billion. In the last five years, the industry has been manipulating the cost by Rs10, Rs12 and Rs15 each year,” Akbar noted. “This is apart from the profit made by market manipulation.”

Akbar said Sindh had given the subsidy to benefit only the Omni Group. “It [Omni Group] was already availing a subsidy of Rs11 per kg given by the Centre and the Sindh government granted then an additional Rs9.3 per kg.”
The PM’s aide noted that Sindh had granted the subsidy to all mills against the “first come, first serve” basis. “This way, the company with the largest share in Sindh, the Omni Group, benefitted. Sindh Chief Minister Sindh Murad Ali Shah should explain why he approved this.”

The SAPM pointed out that the JDW Sugar Mills, in which PTI leader Jahangir Tareen owned shares, was involved in double booking, hiding its profits, over-invoicing and corporate fraud.
According to the report, the mill under-invoiced sales from bagasse and molasses which resulted in a 25% cost inflation. It is also involved in corporate fraud as money was transferred from its public limited company to its private company. Besides, it is also engaged in forward sales, market manipulation through speculation and benami transactions.

The PM’s aide said the Al Arabiya Mills owned by PML-N President Shehbaz Sharif’s son Salman Shehbaz was also found to be involved in committing fraud of around Rs400 million through informal receipts and market manipulation.
The mill made an additional profit of Rs1.3 billion and Rs780 million in n 2017-18 and 2018-19 respectively.

The commission also audited the Alliance Mills, which is owned by the RYK Group, in which PML-Q leader and Punjab Assembly Speaker Pervaiz Elahi’s son Moonis Elahi as well owns 34% shares. The owner of the group, Omar Shehryar, is a relative of Federal Minister Khusro Bakhtiar.
It found that the mill under-reported sales for years and sold sugar to unnamed buyers. In addition, the mill systematic cut down the payment to growers by 11% to 14% between 2014 and 2018, making a profit of Rs970 million.

Akbar said Federal Minister Khusro Bakhtiar could not be asked to resign as he did not have any direct stake in the mill owned by relative. “An inquiry will be launched against those who are directly linked to the matter.”

The commission recommended that the ill-gained money should be recovered from the mill owners and returned to the farmers.

Hit by virus-induced financial crisis, Oxfam to shut operations in Pakistan, 17 other countries