Sindh sees record rise in Covid-19 fatali­ties as 20 more patien­ts die due to contag­ion
By ​ Our Correspondents
Published: May 21, 2020
Tweet Email 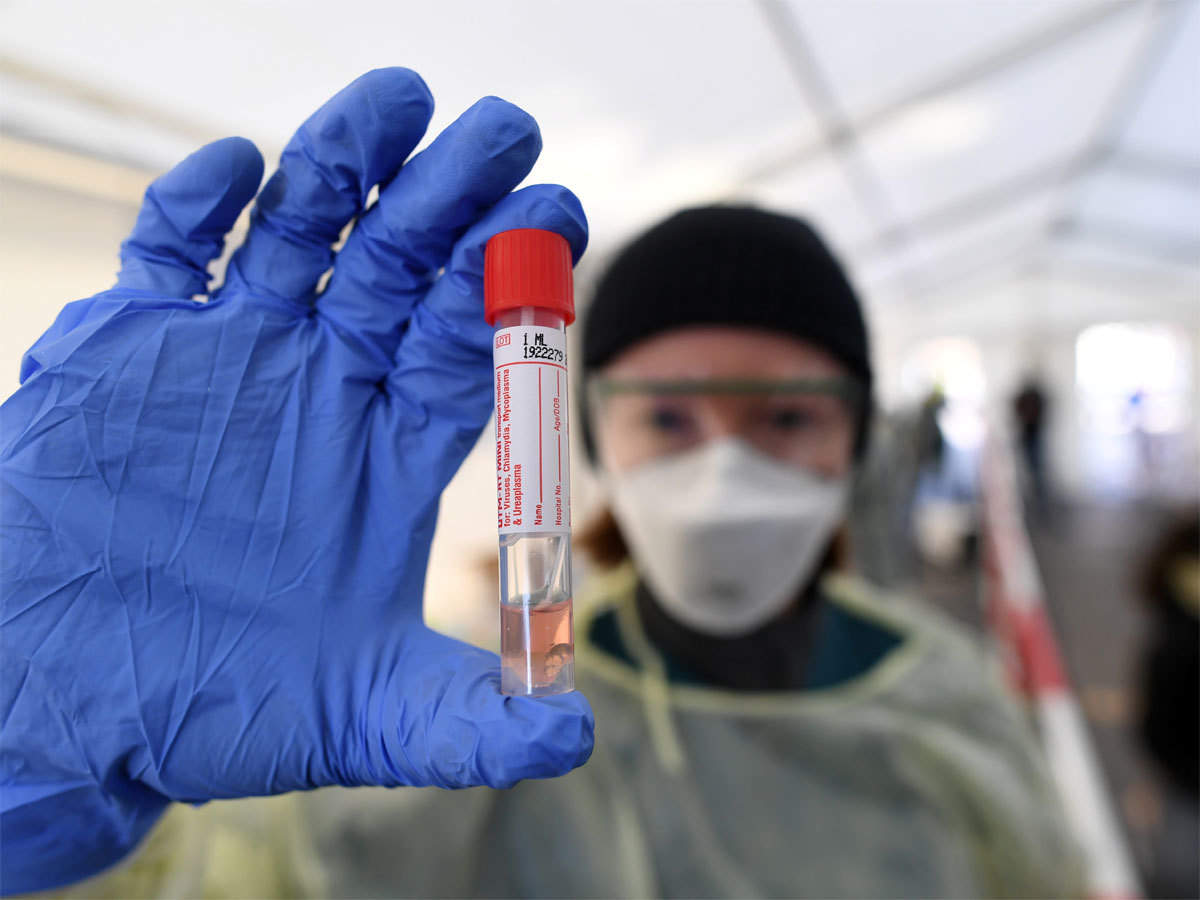 The Covid-19 respiratory illness caused by this mysterious contagion has so far infected more than 4.9 million people in 202 countries and territories of the world – and over 323,000 of them have died and counting.

The virus has claimed at least 1,052 lives while at least 14,155 coronavirus patients have recovered.

1:16am: Business hours for markets, shops extended in Punjab for Eid

Shops, markets and businesses will be allowed to remain open from 9am to 10pm during May 21 to May 24, a notification from the provincial health department read.

It added that the businesses shall operate from 9am to 7pm after May 24.

“All earlier restrictions and exemptions shall continue to remain in force,” the notification further said. 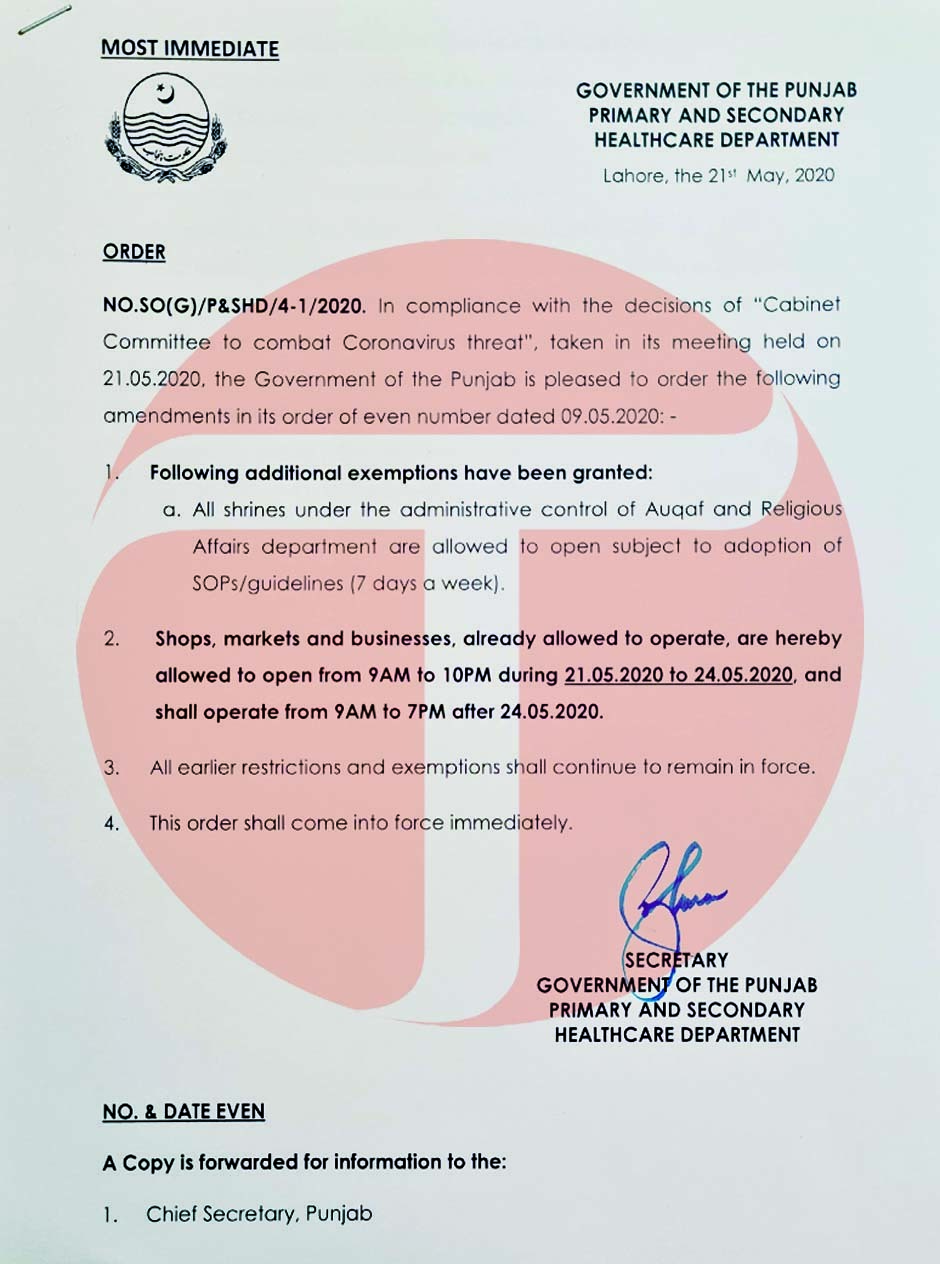 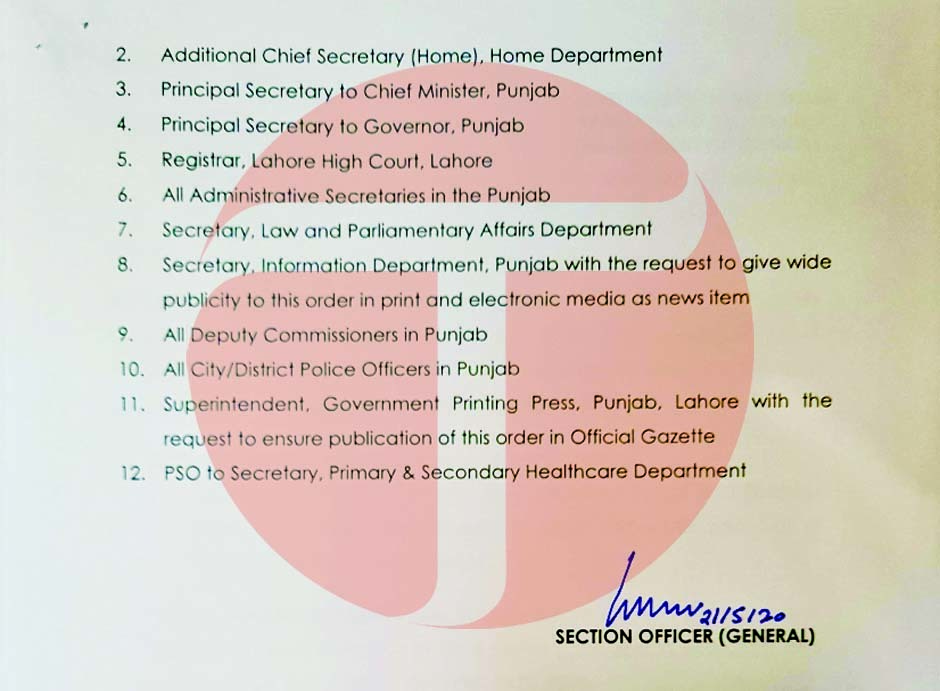 With 14 fresh Covid-19 cases during the last two days, the coronairus tally in Azad Jammu and Kashmir (AJK) has reached 158, according to health authorities.

Of total cases, 10 were reported from Muzaffarabad and four from other districts.

The health official said that 79 patients have recovered from the mysterious illness so far while 189 new suspected Covid-19 patients have been tested during last 24 hours.

According to a spokesperson for the provincial health department, 542 coronavirus tests were conducted during the last 24 hours, taking the total to 19,888.

At least 39 people have died from the deadly disease in the province so far, he added. 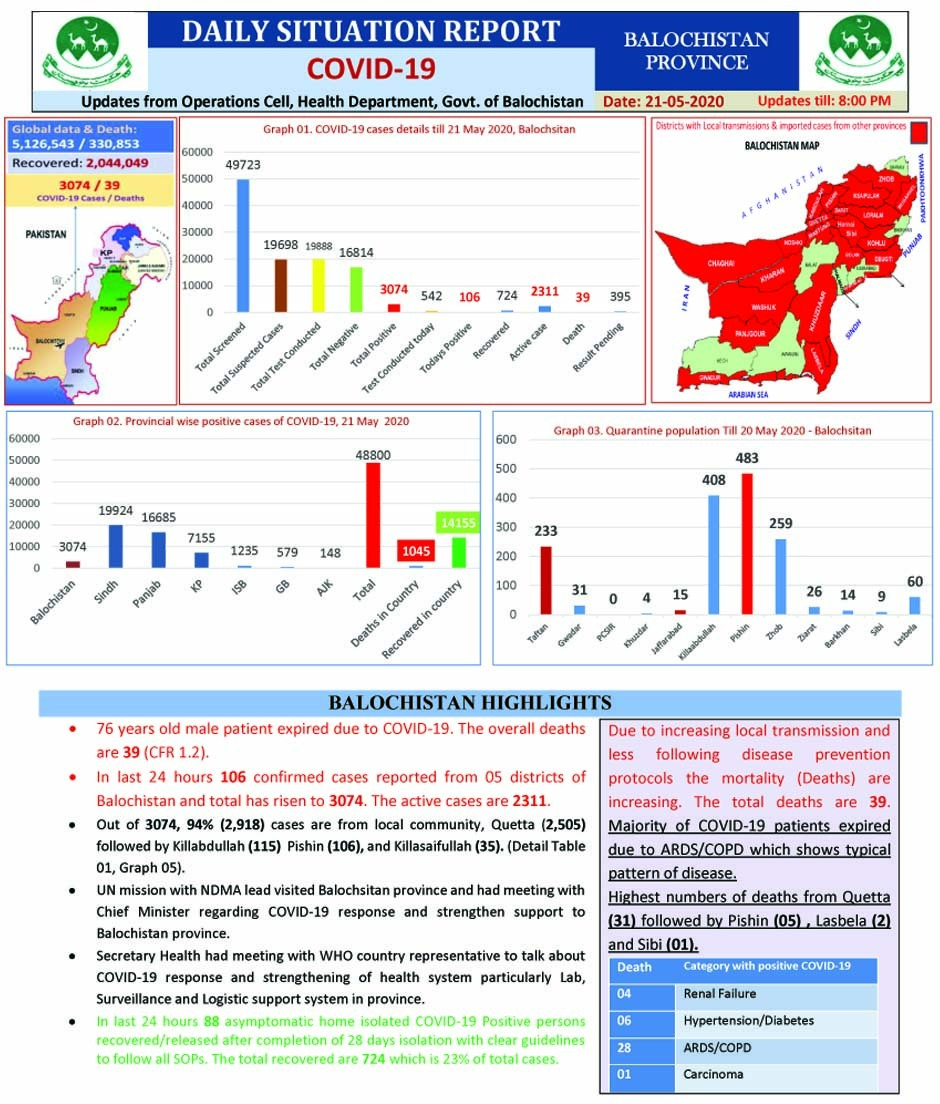 A total of 697 new coronavirus cases have been diagnosed in Punjab, taking the provincial tally to 17,382.

According to a spokesperson of provincial health department, 298 new cases belonged to Lahore alone.

Covid-19 infections in Pakistan trended higher in recent days and were approaching 50,000, official data showed, with total deaths crossing 1,000, as the government remained unsure over the consequences of its decision to end the nation’s lockdown.

Fearful of the economic and financial impact, and swayed by the acute hardship suffered by millions of poor families, Prime Minister Imran Khan has defended the lifting of the lockdown last week, saying the virus spread has been well below projections.

Education is the only major sector that remains closed.

“The ending of the lockdown doesn’t mean the threat is over,” Yasmeen Rashid, the health minister of Punjab, said in an interview on private TV channel on Wednesday, adding that people needed to adopt safety measures themselves.

9:45pm: K-P decides not to give honorary grants to departments amid financial crisis

The Khyber-Pakhtunkhwa (K-P) government has decided not to give honorary grants to all of its departments due to severe financial crunch in the wake of Covid-19 pandemic.

“Due to coronavirus pandemic, the provincial government is facing severe financial crunch. The provincial own resources, revenues as well as federal receipts have considerably been reduced due to Covid-19,” a notification of the finance department read.

It further said that the finance department would not entertain any request of honoraria from any department during the current finical year. 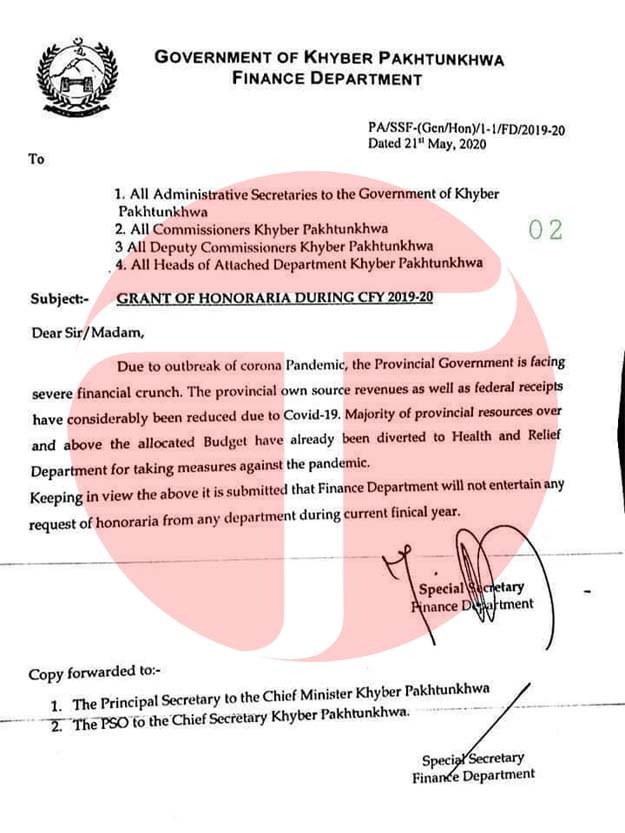 At least 23 more people contracted with the novel coronavirus in Gilgit-Baltistan, bringing the tally to 602 in the region.

According to health authorities, 10 patients have recovered from the respiratory disease.

Khyber-Pakhtunkhwa (K-P) has recorded 340 new Covid-19 cases, taking the tally to 7,155, the provincial health department said in a statement.

With 14 more deaths, the death toll in the province has swelled to 365, it said, adding that 2,198 coronavirus patients have recovered so far.

340 new cases confirmed (59 from Int'l flights quarantine center) taking the total to 7,155 in KP. 14 more lives were lost (7 Peshawar, 2 each in Karak and Bajaur, 1 each in Charsadda, Abbottabad and Kohat) taking total to 365 in KP. 68 patients recovered taking total to 2,198. pic.twitter.com/rs6uDf1LWK

The National Command and Operation Centre was informed that the country’s testing capacity has increased twice-fold since the test, track and quarantine strategy was implemented.

The meeting, chaired by Federal Planning Minister Asad Umar, was apprised that there are 631 smart lockdowns in place currently across the country.

The testing capacity for Covid-19 has been doubled after the Test, Track and Quarantine (TTQ) strategy was launched.

A meeting of the National Command and Operation Centre was apprised that around 631 smart lockdowns have been set in place across the country.

In Pakistan, the government is moving towards relaxation of the lockdown as Covid-19 infections trend higher pic.twitter.com/dKGaVEZF05

680 patients have recovered, taking the number of recovered cases to 6,325. The province’s death toll stands at 336.

The Provincial Disaster Management Authority (PDMA) director-general said every possible facility has been offered to those on the frontline fighting against Covid-19.

All Pakistan Anjuman-e-Tajiran (APAT) Chairman Ajmal Baloch said the government should extend timings for the last three days of Ramazan, in a bid to facilitate traders and the public.

He said this would avoid crowds, adding that forcibly removing customers from stores at 5pm is insulting.

The APAT chairman said the provincial government had stated that it would extend timings if the federal government agreed.

He further maintained that the government should also grant permission to the hotel industry to resume operations after Eidul Fitr.

A special meeting of the cabinet chaired by Prime Minister Imran Khan will be held today.

Railways Minister Sheikh Rashid said the online booking system has encountered a problem, adding that tickets and reservations can be made at Rawalpindi, Lahore, Karachi, Multan, Sukkur, Peshawar and Quetta stations from 8am to 5pm.

He said passengers can visit these stations to purchase or reserve tickets but must strictly observe standard operating procedures (SOPs) issued by the government.

President Dr Arif Alvi expressed his condolences on the death of former Balochistan governor Syed Fazal Agha who lost his battle against the coronavirus.

I would like to condole the death of Syed Fazal Agha, Former Governor of Balochistan and Member Provincial Assembly.
إنا لله وإنا إليه راجعون
May his soul rest in peace.

11:35am: Chinese ambassador says Pak-China will fight against Covid-19 together

On the 69th anniversary of Pakistan-China diplomatic relations, Chinese Ambassador to Pakistan Yao Jing referred to the two countries as ‘iron brothers’ and said they are working together for the promotion of regional peace and development.

The ambassador added that Pakistan and China will fight against Covid-19 and build a closer community.

1/2 Celebrating the 69th Anniversary of China-Pakistan diplomatic relations: We are iron brothers and working together for our well-being and development, as well as for the promotion of regional peace and development. #chinapakistansolidarity@ForeignOfficePk@MFA_Chinapic.twitter.com/UrMVJ2bZIj

2/2 China appreciates Pakistan for its kind understanding&support of our friendship&cooperation. We will promote the high-quality development of #CPEC and fight against #COVID_19, building a closer community of shared future. #chinapakistansolidarity @ForeignOfficePk @MFA_China pic.twitter.com/Uzoadw3eYD

The minister reiterated that easing the lockdown does not mean that the coronavirus has been eradicated.

He urged the masses to continue to take precautionary measures and to fully implement government guidelines.

10:30am: Sindh to follow govt’s 20-point guideline for Eid prayers

He said the 20-point guideline issued by the federal government would be implemented.

The Balochistan government has decided to extend its ongoing smart lockdown in the province till June 2.

All shopping malls, markets, shops, stores and outlets will remain open from 8am to 6pm after Ramazan.

He said special focus would be made in the next budget to improve the healthcare system in K-P.

The minister said the Sehat Insaf Card scheme will be extended to the entire population of the province.

9:05am: PIA to begin operation to repatriate stranded Pakistanis

Pakistan International Airlines (PIA) will begin its operation to repatriate stranded Pakistani nationals around the globe.

42 flights will repatriate 12,590 Pakistanis within a week.

8:30am: Highest number of tests carried out in a single day

The National Command and Operation Centre reported the highest number of tests conducted in a single day. 15,346 tests were carried out in the last 24 hours.

32 persons succumbed to the virus, raising the country’s death toll to 1,017, while at least 14,155 patients have recovered.

350 patients are in critical condition.