None of the speake­rs oppose­d blasph­emy law, only its ‘abuse’.
By Shamsul Islam
Published: August 2, 2011
Tweet Email 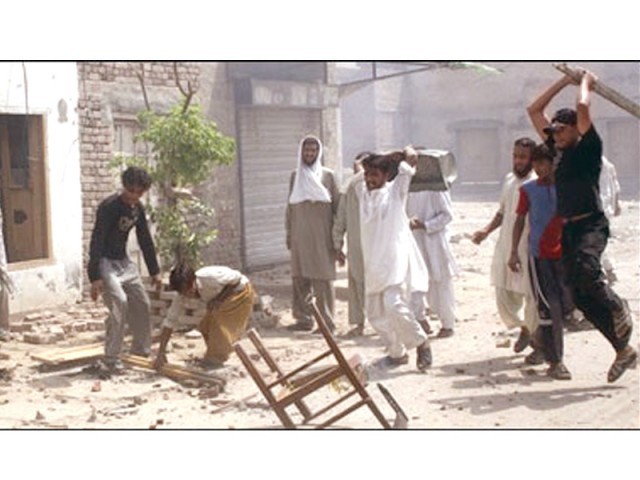 Rioters in Gojra ran amok over rumours of desecration of the Holy Quran. PHOTO: EXPRESS/FILE

Two years after the tragedy, the Christian community in Gojra was joined by a handful of Muslims in commemorating the vicious attack on their neighbourhood in which seven Christians were burnt alive.

A memorial service was conducted at the Sacred Heart Church in Gojra for those who lost their lives on July 31, 2009, when a Muslim mob – incited by local mosques over allegations of blasphemy against Prophet Muhammad (pbuh) – surrounded and set on fire dozens of Christian houses.

In what appeared to be a sign of healing ties between the Christian and Muslim communities, the Catholic priests were joined by Muslim ulema. The Bishop of Faisalabad Joseph Coutts presided over the ceremony which was attended by around 350 people.

The speakers, both Christian and Muslim, spoke of a shared revulsion against violence perpetrated in the name of religion.

“All sections of society should rise above social biases and condemn such madness in the name of religion,” said Father Younis Yaqoob. “This not only defies the country’s law but also brings shame to all of humanity.”

Tahir Naveed, a member of the Punjab Assembly, spoke out against the tendency of people to exact what they perceive to be vigilante justice, particularly in blasphemy cases.

“If a person has committed a crime, he should be prosecuted in a court of law,” he said. None of the speakers, neither Christian nor Muslim, spoke out against the law itself and focused only on what they described as its abuse. Punjab Governor Salmaan Taseer and Federal Minorities Minister Shahbaz Bhatti were killed earlier this year by fanatics who perceived them to be opposed to the blasphemy law.