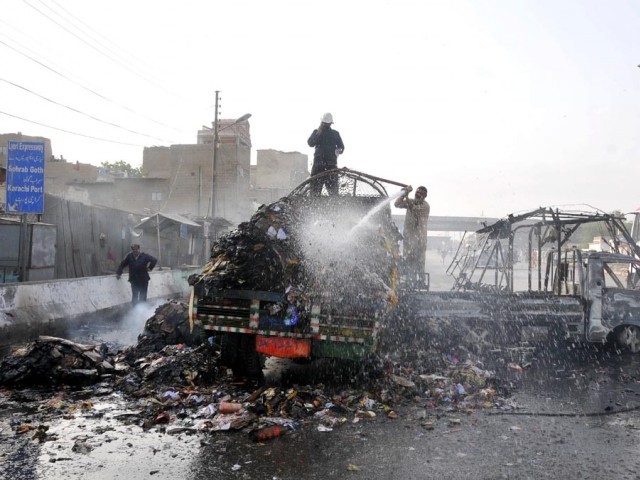 In a bid to restore peace in Karachi, the Sindh government on Tuesday directed the Rangers to conduct targeted operation in the areas hit by violence.

The Frontier Constabulary which is acting as a backup support to the law enforcement agencies in Karachi was also given special police powers which they can exercise when required.

These decisions were taken at a high-level meeting in Chief Minister (CM) Qaim Ali Shah’s house in Karachi which was jointly chaired by the CM and the Interior Minister Rehman Malik.

Law enforcement agencies, including the police and the Rangers, were also directed to take indiscriminate and prompt actions against the criminals and were tasked to restore peace in the city at any cost.

The names of those providing information will be kept confidential.

IG Sindh Wajid Durrani said that 91 target killers were arrested who have allegedly confessed to killing 191 people. He was hopeful that information gained from arrested killers will lead up to more arrests.

The interior minister and the CM appealed to the people as well as the political and religious groups in the city to work towards peace and harmony in the city.

Thirty four people have lost their lives in the ongoing wave of target killings in Karachi in last 24 hours, including five in overnight shooting incidents. MQM chief Altaf  Hussain has given a 48 hour notice to President Asif Ali Zardari and Prime Minister Yousaf Raza Gilani to stop bloodshed in Karachi.

Unidentified armed men attacked a factory in the Industrial Zone of Ahsanabad with more than 1500 factory workers trapped inside. Armed with sophisticated weapons, the men also torched more than 100 motorbikes in the parking zone of the factory, while firing constantly.

Police and Rangers reached the site almost an hour after the attack began and took another hour to regain control of the area.

20 others have been killed in incidents of violence in Orangi Town, Surjani Town, Pak Colony, Landhi, Gulshan-e-Iqbal, Korangi and other areas.

Miscreants also damaged public property in Surjani, Pak Colony, Orangi and other areas. According to police, more then seven vehicles including a passenger bus were burnt.

Exhausted with continuous violence,  residents of Pak colony took to the streets to protest against target killings. Protesters torched tyres and chanted slogans against the violence.

MQM warns against ‘bid to take over Karachi’

As 28 people were killed in fresh violence in Karachi on Monday, the Muttahida Qaumi Movement (MQM) accused some elements backed by the Sindh government of trying to take over its stronghold.

“We won’t let anybody take over Karachi,” MQM lawmaker Wasim Ahmed warned in the National Assembly on Monday, indicating that resurging political violence in the country’s financial hub was far from over.

Wasim said what was happening in Karachi should not be termed a turf war. Rather, it reflected attempts by a particular group who wanted to take the city hostage.

He, however, did not specify who within the Sindh government was backing these elements, although his party had in the past been accusing senior minister Zulfikar Mirza of ‘hatching conspiracies’ against them.

He spoke after MQM lawmakers staged a walkout from the lower house of parliament to protest over the government’s ‘indifference’ on violence in Karachi, followed by lawmakers of the Pakistan Muslim League-Nawaz (PML-N) and Jamiat Ulama-i-Islam-Fazl (JUI-F).

“Nobody seems to be serious in bringing peace back to Karachi. Everyone wants to control the city with guns…but I tell you that this is not going to happen,” Wasim said, after Prime Minister Yousaf Raza Gilani left the house, ignoring Ahmed’s remarks.

In Karachi, Sindh Home Minister Manzoor Hussain Wassan said that he knew what was happening in the provincial metropolis and would soon call a meeting to discuss the situation.

He was talking to media at MQM headquarters popularly known as ‘Nine-Zero’ where he came as part of his initiative to take all stakeholders into confidence.

“I will take a clear position as the home minister of Sindh,” he said. Expressing his resolve to restore peace in Karachi, Wassan said that action would be taken against “all mafias, land-grabbers and drug dealers”.

He said that after a long time he had contacted the MQM chief, who had assured him (Wassan) of his and party’s cooperation for peace in Karachi.

“I cannot forget his (Altaf Hussain’s) words…he said he is a son of Sindh and was willing to lay down his life for Sindh, would fight for the province’s rights.”

He said that rallies were “not enough to restore peace in the city…terrorists must realise that the government will take strict action if they did not desist”, the Sindh home minister said. He also assured MQM leaders that their reservations would be addressed.

Dr Sagheer Ahmed later told the media that the MQM was ready to support any drive for peace in the city.

He said that the Sindh home minister had been thoroughly briefed about “nexus between various terrorist groups, mafias and their modus operandi”.

“We appreciate the efforts made by the Sindh home minister and await implementation on his directives.”

Correction: An earlier version of the story was running an old caption. The change has been made.