Yasir Hussain has once again found himself in hot waters owing to his comments about the airing of the Turkish show Diriliş: Ertuğrul on national TV. However, this time, Yasir has some support from his industry peers including Mansha Pasha and Anoushey Ashraf.

Taking to Twitter, Mansha pointed out why she agreed with Yasir just this one time, saying, "Those lambasting Yasir Hussain and calling the work in Pakistan "sub-par" seem to have forgotten what it takes to make content here."

Those lambasting Yasir Hussain and calling the work in Pakistan "sub-par" seem to have forgotten what it takes to make content here. Even without any subsidy from the govt, even if u manage to gather ur own funds, ur projects can still bet banned or pulled off after clearance

She went on to highlight how the local entertainment industry does not get state patronage and thus, suffers. Mansha lamented how, even if some people manage to gather their own funds and make content, they get banned, citing Sarmad Khoosat's Zindagi Tamasha.

"Don't like the content here? Wonder why our content isn't as great as others? Because they have state patronage and we don't. And currently we are giving state patronage to foreign projects. Go figure," said Mansha.

Like Sarmad Khoosat's film "Zindagi Tamasha."
Dont like the content here? Wonder why our content isnt as great as others?
Because they have state patronage and we dont.
And currently we are giving state patronage to foreign projects.
Go figure.

She then continued to back up her argument, adding a link to an article that listed all the grants that the Turkish Government provides to its local industry - pointing out the importance of state patronage for arts.

The following are articles regarding grants the Turkish Government provides to its local industry and cash rebates that encourage foreign industries to shoot in Turkey. https://t.co/YAkWreJHx8https://t.co/niRPL2hbxv

This is what state patronage for the arts looks like.

Many people naturally presented their own arguments and Mansha came with receipts to defend her point. When a user implied that there hasn't been the same hue and cry for earlier Turkish content, Mansha posted a link to a seven-year-old article that details the industry's outcry at the airing of serials like Ishq-e-Mamnoon.

Khuda ko mano bhaee!
I just shared articles where industry protested ishq e mamnoon and other turkish plays 7 yrs ago.
Also there are many sources that speak on the historical accuracy or lack of in the drama. Pls keep the argument to drama only!
https://t.co/UzU7InLmNu https://t.co/zievmPWqxl

Another user listed the kind of content that our local industry is churning out. "We need to watch more of the current content - mother-in-law and daughter-in-law controversies, husbands assaulting their wives, husband divorcing their wives..."

This painting of all dramas with a single brush is supremely annoying and just plain wrong.
Alif, ehd e wafa and so many other numerous dramas that have been aired in the past few years dont follow this theme.
Bas bhi kardo 🙏 https://t.co/1nf8RdrnVj

She also pointed out another fact worth noting - not all Turkish dramas are like Ertuğrul.

Yes and all Turkish dramas are ertugrul right?
Please stop using the anomaly to support ur argument as well 😊 https://t.co/upd1ItrQqb

In the end, she did clear her stance that she does not agree with Yasir on a lot of other things but this time, she does agree with him.

And also (argh i have to say this because ppl are like this)
I dont agree with everything Yasir H has said in his entire life just cuz i agree with him regd state sponsoring foreign content.
Infact have disagreed with him publicly and privately on many things.

Mansha isn't the only one who voiced her opinion on the matter - Anoushey Ashraf also chimed in saying that the "trolls defending Ertuğrul's airing in Pakistan could have used better language for their own actors."

She also reminded people how their "Ertuğrul wouldn't have lectured, hated and abused him (Yasir). He would have seen it as exploring 'two sides to a story.'" 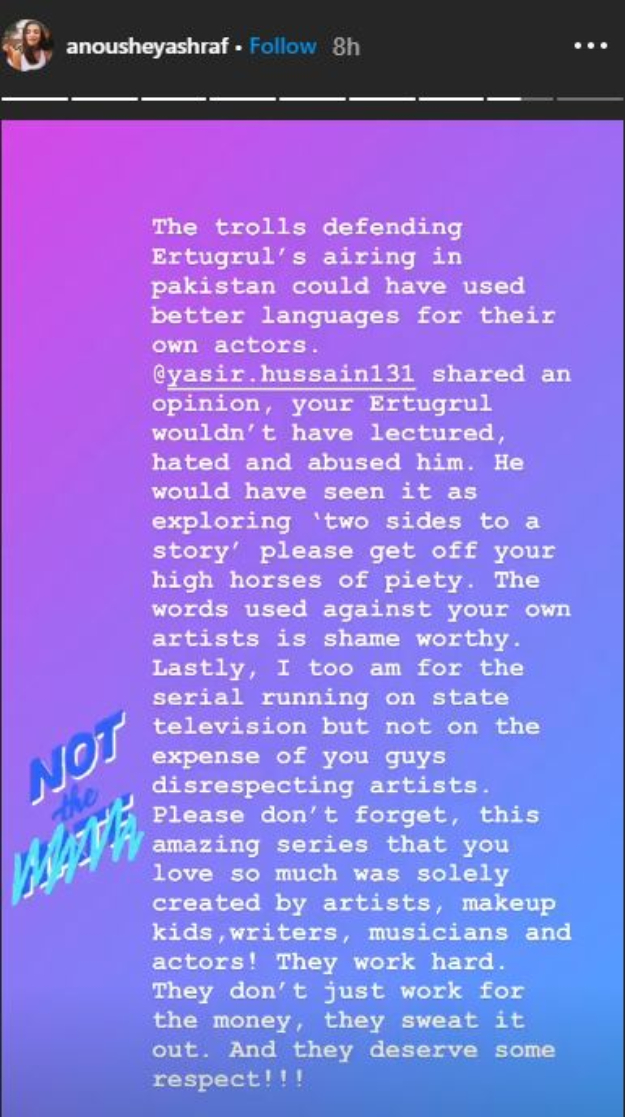 Safe to say, Yasir seems to have some support for his statements despite the intense backlash that ensued after he initially made his statements which said how "Landay ke kaprey aur Turkey ki dramey, dono hi local industry to tabah kardenge (Second-hand clothes and Turkish dramas will ruin the local industry)."

'Why have we barred Pakistani songs, singers in India?' Arijit Singh asks live in concert

'Why have we barred Pakistani songs, singers in India?' Arijit Singh asks live in concert

UK calls for action on racial bias in medical devices

Matric, intermediate exams to be held in May, June 2022

Our century of humiliation?

How TLP came into being?