The virus has claime­d at least 896 lives while over 11,341 patien­ts have recove­red across the countr­y
By ​ Our Correspondents
Published: May 17, 2020
Tweet Email 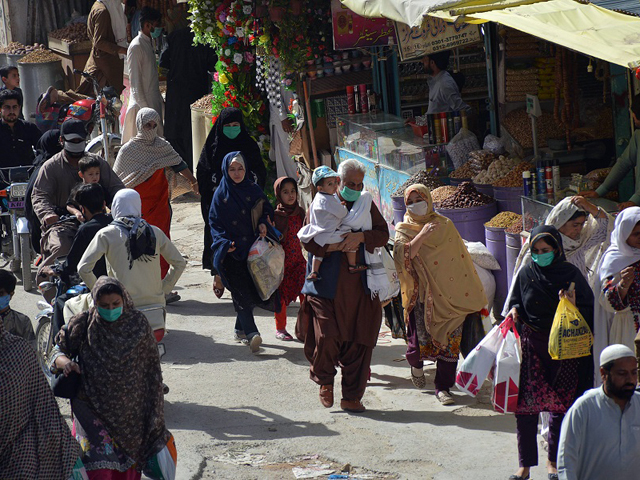 People walk in a market for shopping after the government eased a nationwide lockdown imposed as a preventive measure against the Covid-19, in Quetta on Saturday. PHOTO: AFP

The Covid-19 respiratory illness caused by this mysterious contagion has so far infected more than 4.5 million people in 202 countries and territories of the world – and over 310,000 of them have died and counting.

The virus has claimed at least 896 lives while at least 11,341 coronavirus patients have recovered.

After PML-N, the PPP has launched a tirade against the PTI saying the government lacked strategy to deal with the Covid-19 pandemic.

“The National Assembly (NA) session was called to discuss and formulate a joint strategy on coronavirus but the premier did not come to the House, while Bilawal Bhutto participated in the session and gave best recommendations [on Covid-19],” PPP leader Nafisa Shah said.

Nafisa made these remarks while addressing a press conference along with PPP leaders Rubina Khalid and Palwasha Behram in the federal capital on Sunday.

12:07am: Trains likely to start chugging from Wednesday: railways minister

Railways Minister Sheikh Rashid Ahmed has expressed hope that train operations across the country would resume from Wednesday, saying that the move cannot be delayed as people stuck in different cities due to the coronavirus-induced lockdown are desperate to return to their hometowns to celebrate Eid with their families.

Addressing a news conference, the railways minister said the final decision regarding resumption of train operations would be taken after a meeting with Prime Minister Imran Khan on Tuesday.

10:39pm: Passive immunisation trials to be carried out at NIVCD

Following preliminary reports of the clinical trials of passive immunisation at various hospitals across the province, the National Institute of Cardiovascular Disease (NIVCD) has become one of six institutes chosen to carry out further tests by the Sindh government on Saturday.

An initial report was sent to the Sindh Health Department on Friday, which revealed that ongoing plasma therapy trials, spearheaded by the National Institute of Blood Disease (NIBD), had achieved an 80 per cent success rate in curing Covid-19 patients.

The Sindh government has, so far, permitted six government teaching hospitals in the province to carry out these clinical trials in collaboration with the NIBD. These hospitals include Dr Ruth Pfau Civil Hospital Karachi, Jinnah Postgraduate Medical Centre, Shaheed Benazirabad Peoples University of Medical and Health Sciences for Women, Sukkur Ghulam Muhammad Mahar Medical College and the NICVD.

Despite the efforts made by prison authorities to prevent an outbreak of the novel coronavirus among the inmates of Sindh’s jails, the contagion has made its way to Karachi Central Jail. As many as 40 prisoners and three members of the jail staff have tested positive for Covid-19, it was revealed on Sunday.

Sources at the prison told The Express Tribune that an inmate began displaying symptoms of the infection three days ago. He was immediately tested and diagnosed with the virus, while the prison administration also isolated other inmates housed at the barracks with him, they added.

The Balochistan Health Department, in its daily situational report, has confirmed one more casualty due to coronavirus in the past 24 hours to bring the provincial death toll to 37.

454 patients have recovered from the disease in the province so far. 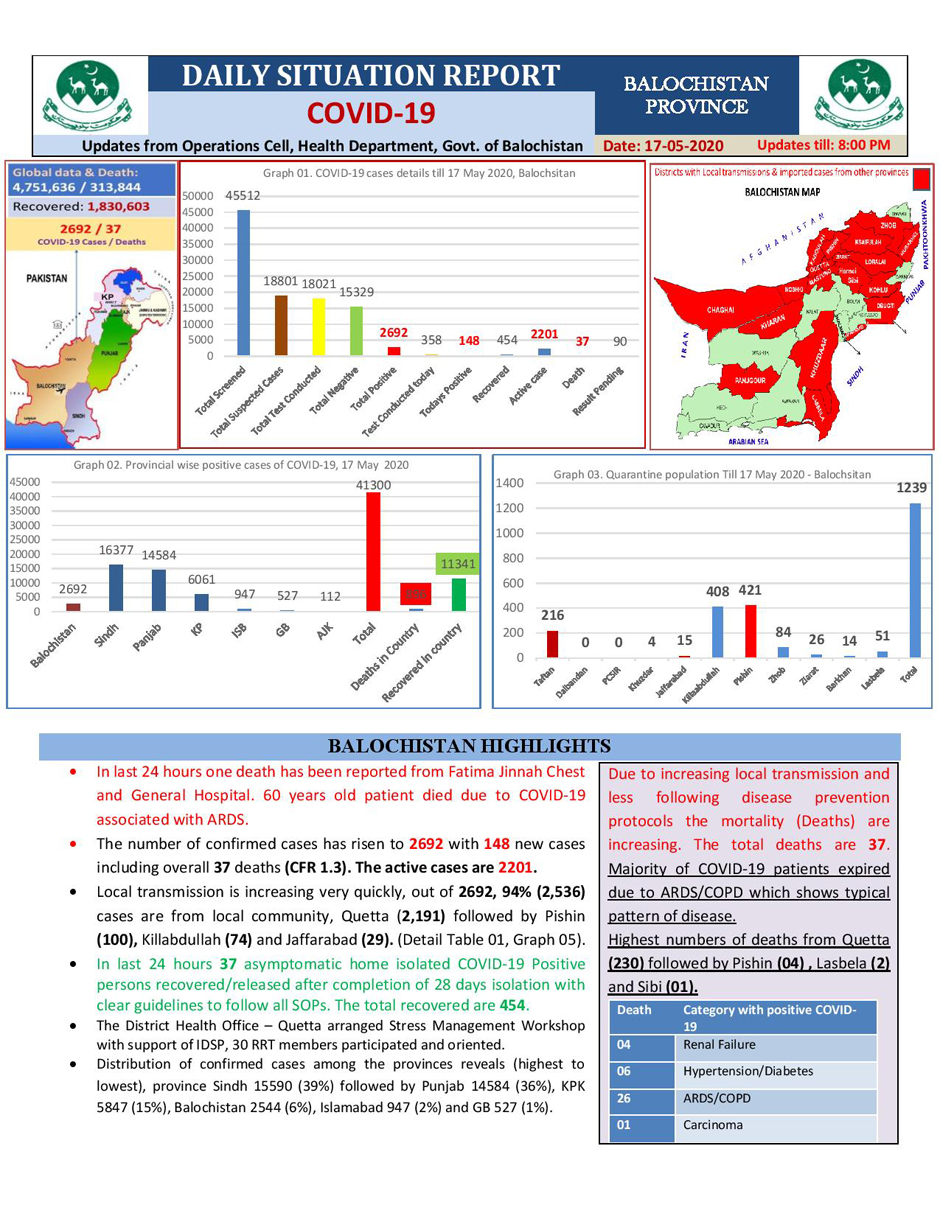 Punjab’s Primary and Secondary Healthcare Department has reported seven more deaths in the past 24 hours, taking the provincial death toll to 255.

163,466 tests have been conducted in the province so far, according to health officials.

Keeping in view surge in coronavirus cases and failure of masses to follow the precaution, the Azad Jammu and Kashmir (AJK) government has decided to impose a strict lockdown in the state by withdrawing the relaxation it earlier announced.

Starting from midnight Monday, the stricter lockdown will remain in place for two weeks, said a notification issued by the state government. 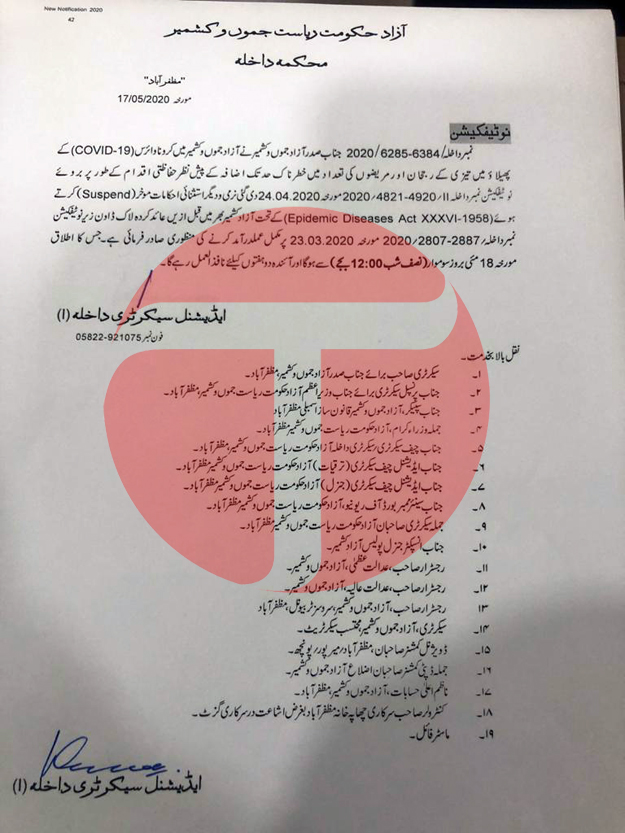 The Khyber-Pakhtunkhwa (K-P) Health Department, in its daily situational report, has confirmed 13 more casualties due to coronavirus in the last 24 hours to bring the provincial death toll to 318.

Out of 13 new deaths, eight were reported from Peshawar, two from Swat, and one each in Swabi, Karak and Kohat.

84 more patients recuperated from the disease, taking the recoveries tally to 1,783 in the province. Active cases stand at 3,960, according to officials.

Responding to Sindh Information Minister Syed Nasir Hussain Shah’s accusations that the National Disaster Management Authority (NDMA) did not provide a single ventilator or set up any laboratory for coronavirus patients in the province, the NDMA spokesperson provided a break down of all the medical equipment distributed to Sindh on Sunday.

The spokesperson said the NDMA provides relief to all provinces, including to the regions of Gilgit Baltistan and Azad Jammu and Kashmir.

Minister for Information Khyber-Pakhtunkhwa (K-P) Ajmal Wazir during a visit found hairdressing shops and salons to be following the standard operating procedures (SOPs) issued by the government.

Addressing a press conference following his visit, the minister said that the lockdown may have been eased in K-P, but there is no way the government would tolerate violations of SOPs.

Prime Minister Imran Khan will launch the Corona Cash Emergency Programme tomorrow. The relief fund has been created for those laid off from work during the pandemic.

The laid off workers will be given a stipend of Rs12,000 under the emergency programme.

The prime minister had launched the Ehsas Labour Portal on May 2. The portal is so far said to have received around 3.4 million applications.

2:50pm: Decision to resume railway operations to be made on Tuesday

Federal Minister for Railways Sheikh Rashid said the final decision regarding railway operations will be taken on Tuesday.

He said the decision will be made after a meeting with the premier.

The minister said SOPs will be strictly followed and resuming train operations is important to facilitate passengers before Eidul Fitr.

He vowed to return back Rs240 million advance booking to passengers if train operations do not resume.

Pakistan Army troops are distributing ration bags to those affected by the pandemic in Gilgit-Baltistan.

According to the Inter-Services Public Relations (ISPR), over 14,500 ration bags have been distributed amongst families in Gilgit; 5,800 in Ghizer; 191 in Kharang and 8,111 in Skardu.

In addition, 386 ration bags have been distributed amongst families of martyrs and 270 to disabled persons.

114 patients are in critical condition and 31 on ventilators, the chief minister added.

Federal Minister for Education Shafqat Mehmood said he has received many queries regarding individual cases of students regarding exam promotions.

“At a federal level, we have taken broad policy decisions. For answers to individual questions, students may approach concerned boards,” he wrote.

I am receiving many queries/questions regarding individual cases of students regarding exam promotions. I want to inform everyone that at the Federal level we have taken broad policy decisions. For answers to Individual questions students may approach the concerned Boards

The government has announced Eidul Fitr holidays from May 22 to May 27.

Due to the current situation in the country, only medical stores and shops containing essential items will remain open during the Eid holidays.

The meeting decided that SOPs will be implemented for shopping malls and inter-district public transport,  set to resume tomorrow.

Chief Secretary Punjab Jawad Rafique said if markets were to be found violating SOPs, the entire market will be sealed.

He further maintained that businesses will resume for four days a week, whereas a complete lockdown will be observed during the remaining three.

1:25pm: Govt launches guidelines on the use of PPEs, says Dr Zafar Mirza

Special Assistant to the Prime Minister on Health Dr Zafar Mirza said after ensuring regular supplies of personal protective equipment (PPE) through the National Disaster Management Authority (NDMA), the federal government has relaunched guidelines on the use of PPEs and have started a short training course.

Adviser to the Prime Minister on Parliamentary Affairs Babar Awan telephoned the Speaker of the National Assembly Asad Qaiser.

He appreciated Qaiser’s services and congratulated him for his speedy recovery.

They discussed the remaining 53 days of parliamentary proceedings and agreed that the constitutional requirement of the proceedings must be fulfilled in an efficient manner.

As of now, 92 patients are in the ICU and 31 on ventilators, he added.

During the last 24 hours, 398 #COVID19 patients haved recovered & 11 people have unfortunately passed away in #Sindh. There has been a sharp increase in patients requiring ICU & so far 92 patients are in the ICU & 31 are on the Vent.

11:40am: PIA announces fourth flight from the US

The Pakistan International Airlines (PIA) has announced to operate its fourth flight from the United States.

Officials at the Pakistani Embassy in the US have started registrations for passengers to return home before Eidul Fitr.

The third PIA flight will take off from New Jersey to Lahore later today, carrying 250 passengers. It will reach Allah Iqbal International Airport on Monday.

Special Assistant to the Prime Minister for Youth Affairs Usman Dar called on Punjab Chief Minister Usman Buzdar to discuss the activities of the Tiger Force.

He said the youth participating in the Tiger Force are dedicated and are setting an example of helping those affected by the pandemic, as per the vision of the premier.

He said 700,000 youths have registered for the force in Punjab and 64,000 have been assigned various responsibilities.

10:55am: At least 250 Pakistani prisoners in Malaysia to return home

At least 250 Pakistani prisoners in Malaysia will be repatriated.

The prisoners will reach Lahore today via Malaysian airlines.

All the prisoners will be screened at the airport and shifted to quarantine centres.

Pakistani High Commissioner to Malaysia Amna Baloch said that the repatriation of all Pakistani prisoners would be arranged through three flights before Eidul Fitr.

He said the concerned department has been ordered to utilise the resources needed to help those affected by Covid-19.

The total number of rescue personnel who have contracted the virus stands at eight.

The Khyber-Pakhtunkhwa (K-P) government has announced the restoration of public transport from tomorrow.

Federal Minister for Information and Broadcasting Shibli Faraz said the government has implemented a selective lockdown policy to remove pressure from daily-wage earners and labourers.

The minister maintained that a complete lockdown is not feasible for the poor segments of society.

He said the government should ensure the implementation of standard operating procedures (SOPs) to contain the spread of the virus.

7:00am: ‘SOPs to be followed during Sunday church services’