Let’s talk about the econom­ic implic­ations of a US-China cold war on Pakist­an
By M Bilal Lakhani
Published: May 17, 2020
Tweet Email 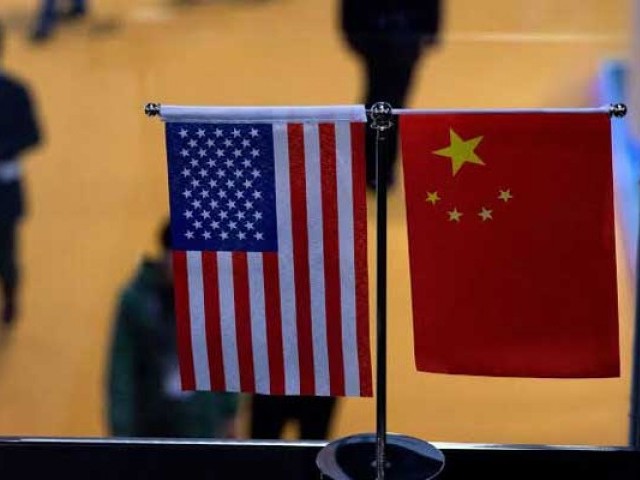 An AFP file photo showing US and China flags.

“No one can serve two masters,” reads a verse in the sixth chapter of the Gospel of Matthew. “For either he will hate one and love the other, or he will hold onto one and despise the other. You can’t worship God and Money both.” Becoming a frontline state in the emerging US-China cold war will force Pakistan to negotiate the strategic interests of two competing superpowers. How Pakistan plays its cards in the next few years will determine the trajectory of its economy, democracy and foreign policy for the rest of this century.

On the surface, America and China appear to be fighting over tangible policy issues like trade and whether China covered up the initial spread of Covid-19. However, scratch beneath the surface and there is a deeper battle between the insecurities of a rising superpower and an existing superpower, retreating from the world. Beyond realpolitik, this is also an ideological battle between democracy and authoritarianism. In the US-led global order, consensus had emerged that democracies are the best form of human government, with some going as far as to famously declare the “end of history”.

The rise of authoritarian China as an economic powerhouse (lifting 850 million people out of extreme poverty) and America’s spectacular failure to fight Covid-19 as effectively as China will wedge open the ‘democracy’ debate in fragile democracies like Pakistan. China through its authoritarian governance model has not just been able to flatten but crush the curve of the virus. Entire cities were put into complete lockdown and gleaming new hospitals were built over night. America on the other hand, has 1.4 million Covid-19 cases and 85,000 dead — the highest in the world. The contrast couldn’t be sharper, even though one cannot fully trust the Chinese numbers because of the lack of a free press.

Pakistan’s slow, long march towards democracy has shown uneven progress but at least there is broad consensus in the last ten years that a democracy is the best governance model for the country. This consensus can now be challenged by un-democratic forces in the country, using the China’s success, especially if Pakistan chooses to ally with China in its emerging cold war with the US. This is just one example of an unintended but fundamental way in which Pakistan’s choices in the US-China cold war could transform its long-term development trajectory.

Now, let’s talk about the economic implications of a US-China cold war on Pakistan. “America is Pakistan’s largest export market, but China is Pakistan’s largest foreign investor,” shares Arif Rafiq, a non-resident scholar at the Middle East Institute, who wrote one the most authoritative and independent reports on the economic, political, and strategic implications of CPEC. “Pakistan is in a bind because two economic spheres will emerge in this cold war, one led by the US and the other led by China. Pakistan will be pushed to pick sides and will have difficulty navigating this landscape because there are no easy trade-offs.”

The push to pick sides between the US and China will slowly manifest itself in different policy debates. For example, US officials have repeatedly criticised CPEC, arguing that the project is not sufficiently transparent and will saddle Pakistan with the burden of expensive Chinese loans. Meanwhile, the Chinese Ambassador to Pakistan has repeated the oft-used characterisation of CPEC as a game-changer for Pakistan. In fact, the Ambassador has said that China wants to see its relationship with Pakistan serve as an example for its relations with other states. Another example of the rising pressure to pick a side is the noise created around transparency on Chinese loans for Pakistan, as a pressure tactic before getting a US-blessed IMF rescue package.

On foreign policy, America has made a strategic calculation to support India’s rise as a regional superpower, to counterbalance China. This will create an interesting dynamic where Pakistan and China stand on one side for issues like Kashmir, while the US and India stand on the other side. Before Pakistan’s own interests get swept up by the rising tide of this new cold war, our policymakers must design a proactive strategy for Pakistan to navigate this bipolar world effectively.

Transgender rights during times of Covid-19