The virus has claime­d at least 866 lives while over 10,880 patien­ts have recove­red across the countr­y
By ​ Our Correspondents
Published: May 16, 2020
Tweet Email 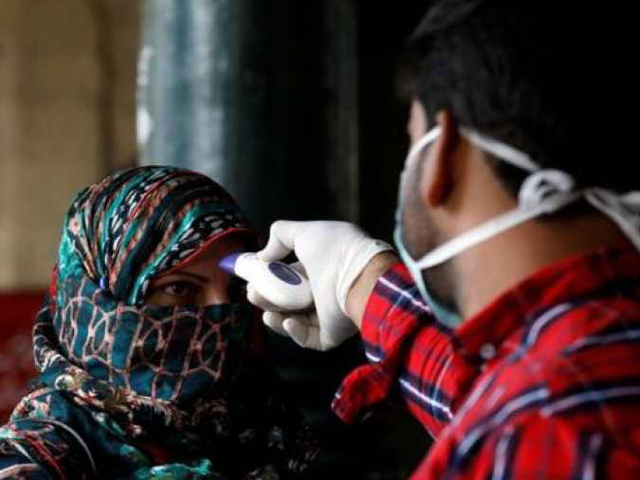 A total of 14,878 tests were conducted by health authorities across the country on Friday. PHOTO: REUTERS/FILE

The Covid-19 respiratory illness caused by this mysterious contagion has so far infected more than 4.5 million people in 202 countries and territories of the world – and over 310,000 of them have died and counting.

The virus has claimed at least 866 lives while at least 10,880 coronavirus patients have recovered.

The Azad Jammu and Kashmir (AJK) Health Department has confirmed four new coronaviruses cases – three in Muzaffarabad and one in Mirpur – to bring the total number of Covid-19 patients to 112 in the state.

The virus has claimed one life while 76 patients have recovered in the state so far.

12:00am: PM office staff among other govt employees test positive for Covid-19

Some employees of the Prime Minister and other important government offices have tested positive for Covid-19, PM’s aide Shahbaz Gill confirmed in a tweet on Saturday.

Responding to the media reports, Gill said the staff members of important offices are screened for coronavirus as per the “routine practice” and some of them tested positive for coronavirus and have already been quarantined.

He also clarified that none of the infected employees have been in direct contact with any “high-profile personality”.

The federal government has announced a six-day holiday for the upcoming Eidul Fitr, starting May 22 (Friday) till May 27 (Wednesday).

The Ministry of Interior in a notification issued on Saturday said all markets, public places and other non-essential businesses will remain closed during the Eid holiday amid the coronavirus outbreak.

However, essential shops, medical services and other emergency services will continue to remain operational, said the official notification. 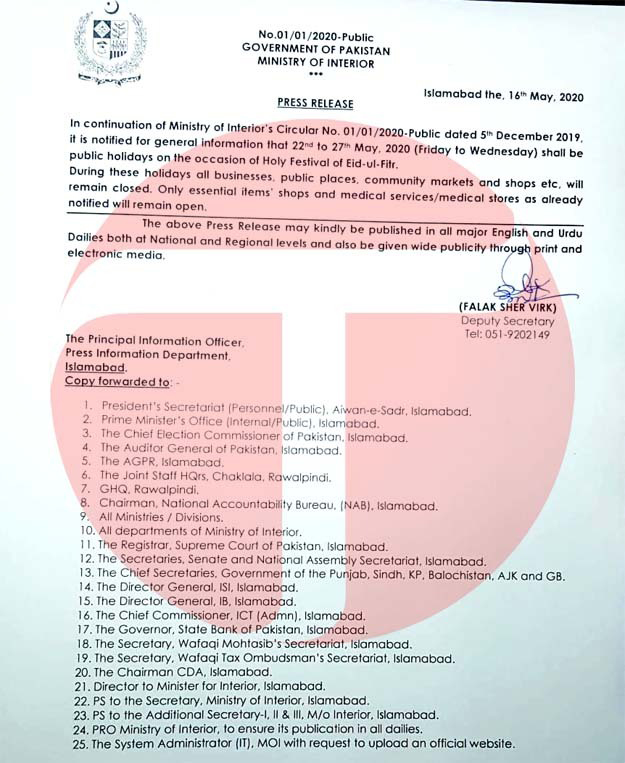 Doctors staged a demonstration at Jinnah Postgraduate Medical Centre (JPMC) on Saturday after a doctor was assaulted the previous night, demanding stern action against those responsible for the attack.

Dr Raja Shakeel was reportedly attacked by the attendants of a deceased Covid-19 patient admitted to JPMC’s emergency ward while he was treating another patient.

The Balochistan Health Department, in its daily situational report, has confirmed five more casualties due to coronavirus in the past 24 hours to bring the provincial death toll to 36.

417 patients have so far recovered from the disease in the province. 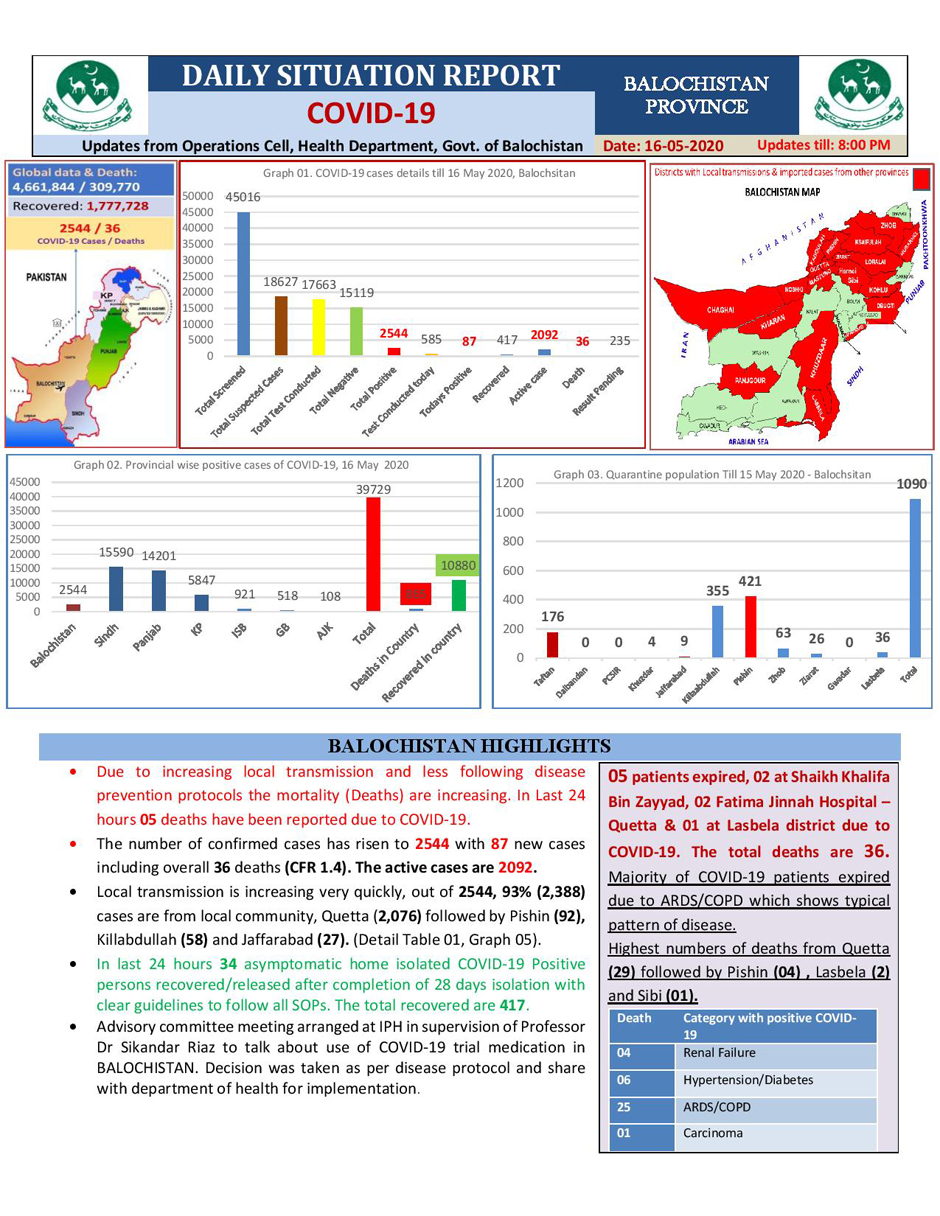 The federal government has decided to open border crossings with Afghanistan for 24 hours a day and 6 days a week to allow bilateral/transit trade, which were closed following the Covid-19 outbreak in March.

In a notification issued on Saturday, the Ministry of Interior said Torkham and Chaman borders will remain open for 24 hours for six days except Saturdays throughout the week and unlimited number of trucks will be allowed to cross while ensuring standard operating procedures (SOPs) and guidelines to stem spread of coronavirus. 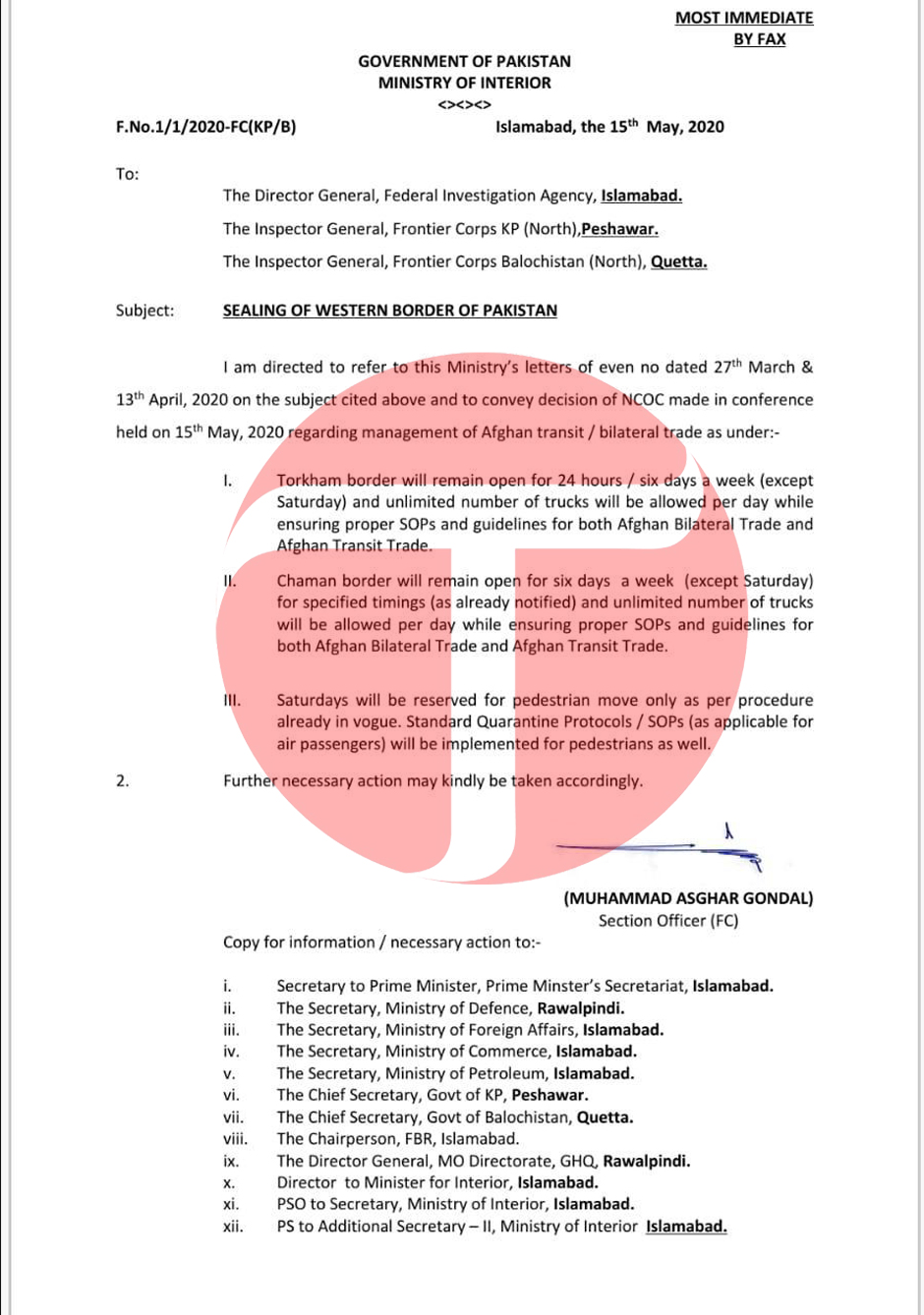 The Gilgit-Baltistan Health Department has confirmed nine more cases of coronavirus to raise the region’s tally to 527.

Health officials said three more patients recuperated from the mysterious disease in the past 24 hours to bring the total number of recoveries to 348.

Out of nine new cases, seven were reported from Ghizer and one each from Astore and Skardu.

Number of active cases stands at 175 in the region.

The Khyber-Pakhtunkhwa (K-P) Health Department, in its daily situational report, has confirmed 14 more casualties due to coronavirus in the past 24 hours to bring the provincial death toll to 305.

Out of 14 deaths, seven were reported from Peshawar, three from Swat, and one each in Lower Dir, Mardan, Kohat and Bajaur.

169 new cases – seven from International flights quarantine center – were also reported, taking the total to 5,847 in the province.

86 more patients have recuperated from the mysterious disease to bring the total number of recoveries to 1,699. Number of active cases stands at 3,843 in the province.

Pakistan conducted the highest number of tests per day during the last 24 hours, the National Command and Operation Centre (NCOC) was informed on Saturday.

A total of 14,878 tests were conducted by health authorities across the country on Friday.

During an NCOC meeting, headed by Minister for Planning Development Reforms and Special Initiatives Asad Umar, satisfaction over the increase in testing capacity was expressed. Capacity has increased by around 30 times. The country had two labs to test Covid-19 samples in mid-March and now has 70 laboratories.

Pakistan conducted the highest number of tests per day during the last 24 hours, the National Command and Operation Centre (NCOC) was informed.

A total of 14,878 tests were conducted by health authorities across the country on Friday.

The province’s death toll is 245, while at least 4,757 patients have recovered.

The Khyber-Pakhtunkhwa (K-P) government has extended the lockdown till May 31.

Adviser to K-P Chief Minister on Information and Public Relations Ajmal Wazir said in addition to government offices, all other offices will remain closed as well.

The adviser said all public transport will resume from Monday, following standard operating procedures (SOPs) as issued by the government, adding that the district administration and transport authorities will ensure implementation.

According to the decision of the Task Force, barber shops will remain open on Fridays, Saturdays and Sundays, he added.

The number of recovered patients in the province stands at 3,804.

490 out of the 674 new cases emerged from Karachi, the chief minister said.

The chief minister said the government will fight the pandemic through collective efforts of the nation.

He urged citizens to behave responsibly and adopt precautionary measures, adding that strict action will be taken against those violating standard operating procedures (SOPs) issued by the government.

58 shops in Lahore have been sealed and 11 shopkeepers arrested for violating government orders.

Deputy Commissioner Lahore Danish Afzal said no shopkeeper will be allowed to violate the laws.

Punjab Inspector General of Police (IGP) Shoaib Dastagir has issued instructions to provide an Eid package to those martyrs who died in the fight against the pandemic.

Punjab IGP has ordered the police to visit the homes and deliver the gifts which include Rs5,000 and a bag of ration.

11:40am: China donates medical supplies worth Rs36m to Pakistan

The Industrial and Commercial Bank of China (ICBC) has donated medical supplies worth over Rs36 million to Pakistan.

NDMA Chairman Lt Gen Muhammad Afzal thanked the ICBC and the Chinese government for helping Pakistan combat the spread of the virus by providing medical supplies.

Most of the stranded Pakistanis in Iraq worked for oil and gas companies and were unable to return home after international flights were suspended.

11:00am: PDMA sends medical equipment to hospitals in K-P

The Islamabad High Court (IHC) has issued a contempt notice to the health secretary for violating court orders amid the pandemic.

Due to the coronavirus, the IHC had ordered to adjourn all cases against medical staff. Despite the courts’ orders, the health secretary took action against a doctor.

Justice Athar Minallah questioned why such action was taken against the doctor.

“Doctors, nurses, health workers and paramedical staff are performing extra duties amid the pandemic. Taking action against them is unsuitable at this time,” he remarked.

1,581 tested positive for the virus in the last 24 hours and 31 patients lost their lives to the deadly disease.

The country’s death toll jumped to 834, while at least 10,880 patients have recovered.

8:40am: ISPR releases documentary on PPEs

The Inter-Services Public Relations (ISPR) has released a special documentary for doctors, nurses, paramedics and other healthcare workers – spreading awareness on the proper use of personal protective equipment (PPE) at hospitals.

Special Assistant to the Prime Minister on Health Dr Zafar Mirza launched the documentary in Islamabad.

The documentary noted guidelines on the selection and use of PPEs at health facilities throughout the country, as well as discouraging unnecessary use of the protective gear.

The minister said the Pakistan International Airlines (PIA) and Serene Air will resume their flights for Karachi, Lahore, Quetta and Peshawar.

Each passenger will be thoroughly screened, their body temperature will be checked and face masks and hand sanitiser will be provided, Sarwar said.