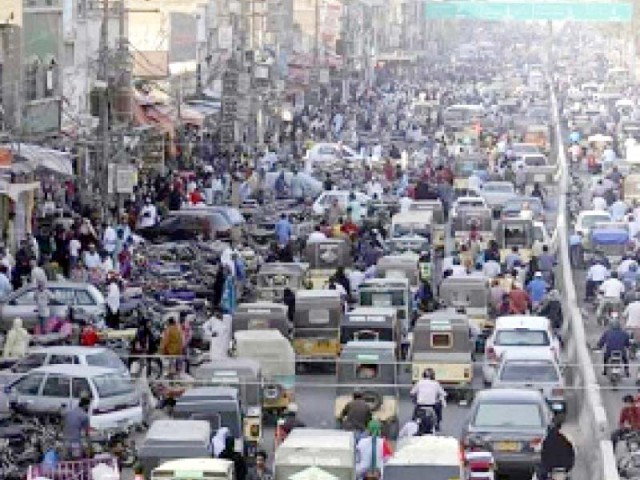 LAHORE: Gridlocks were witnessed across the city as shoppers flocked the markets on Wednesday in congested areas, including Anarkali, Shah Alam, Rang Mahal, Circular Road and other wholesale markets.

Long customers’ queues were also seen outside stores of items used by women and children as some responsible brands are observing social distancing SOPs enforced by the government. In several markets, administration and police officials were seen appealing to citizens to take precautions and observe social distancing.

Speaking to The Express Tribune, several traders said the government should allow the retail sector to keep businesses open round the clock. It will help in reducing crowd in markets and help the authorities to better enforce precautionary measures.

Punjab Minister for Industries and Trade Mian Aslam Iqbal visited several markets along with district administration officials to inspect implementation of SOPs. However, after observing casual attitude of citizens and shopkeepers, the minister warned that the government will soon review its decision to ease restrictions in the lockdown.

He said the trader community had promised to implement SOPs but the situation in the markets is on the contrary. He resented that SOPs have not been implemented in the markets in letter and spirit.

He outlined that it was agreed with the traders that entry of children in the markets will be prohibited but this undertaking was not fulfilled by them. Besides shopkeepers, buyers are also seen without face masks, which is dangerous, he added.

The minister asserted that if the prevailing situation persists then not only the timings of markets will be reduced but they may also be closed. A decision in this regard will be made soon.

Speaking to traders in Anarkali Bazaar, the minister warned that the government would take action as per coronavirus ordinance if traders fail to implement the SOPs. “The government can also consider further reducing the business hours as traders are not fulfilling their commitment,” the minister said.

He also highlighted that the government has planned to conduct pool tests of customers and shopkeepers in markets to check the spread of the disease. “The government will take stricter measures if the disease starts to spread faster,” he said.

Meanwhile, Punjab Chief Minister Sardar Usman Buzdar also expressed deep concern over contravention of precautionary measures in markets after easing of lockdown and directed the administration and police to ensure implementation of the SOPs.