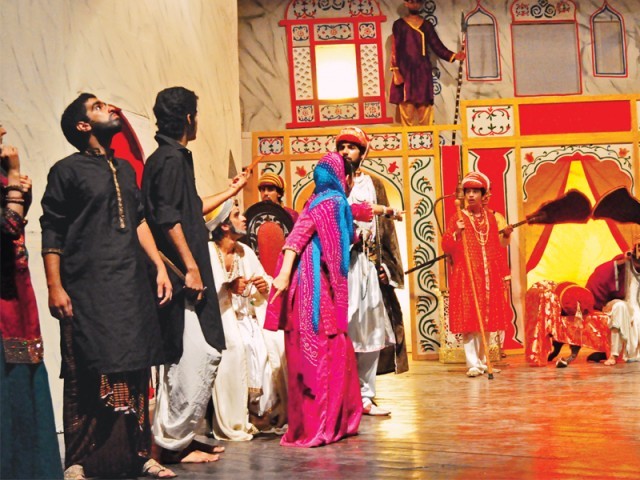 Re-done for theatre, Pakistani writer Mumtaz Mufti’s magnum opus Nizam Sakka left the cliched form of slapstick comedy behind to explore the story of a man who is granted a chance to be king of the subcontinent for one day.

Directed by Talal Ali Jan, the theatrical adaptation is produced by Theatre Hub, self-proclaimed saviours of theatre. The company routinely challenges its own standard by choosing classical plots.

The advent of pop theatre has caused the quality of plays to deteriorate — they now mostly rely on shallow scripts and slapstick comedy. What makes Nizam Sakka different is its historical significance coupled with a strong script based on Mufti’s publication.

The writer’s short stories provide a progressive and thought-provoking understanding of social issues.

“We knew that we would have to engage the audiences with our play. We were not aiming for slapstick comedy,” says Jan, who spent almost nine months preparing and researching the temporal setting of Nizam Sakka. “We picked a period play, because it’s just a great way to promote social awareness with historical references.”

The details of this preparation could be seen in the play’s set, starting with the village house of Nizam Sakka, who was portrayed by Faheem Muzaffar. With a backdrop of the river Ganges — where the famous battle between the Mughal King Humayun and Sher Shah Suri took place — the set featured a charpai and a tree, complemented by an overarching entrance to Sakka’s small hut. The latter half of the play featured a double-storey set of Humayun’s palace with beautiful arches and decorated with delicate calligraphy.

The play tells the tale of Sakka, a water carrier dealing with his love-struck son and a demanding wife. Nizam’s fortune changes overnight as he accidently saves King Humayun (Ahsen Sohail) from drowning during his battle against Sher Shah Suri. As a reward, King Humayun fulfils Nizam’s one wish and allows him to be king for a day. It is in this one day that Nizam exposes the society’s hypocrisy.

The play captivated the audience with wit and humour, coupled with a strong element of satire. Additionally, the actors’ amusing facial expressions and perfect situational comedy added to the enjoyment of the evening.

The role of Nizam’s son, Samsoo was played by Hamza Kamal who is known for his methodical comedy in Punjabi as well as other languages. Explaining why it was a better idea to do the play in Urdu, Kamal said: “The dialogue delivery in Urdu and Punjabi is easier for Pakistani actors. We can do the play in English, but that may not be up to the mark.” The actor, whose character was seen singing Punjabi folk songs, further added: “English comedy is difficult due to the structure. So it’s hard to be perfect. Also, this play is a typical Mughal era play which means the actors had to change their accents as well.”

The play had all the right factors to entertain its audiences. More than just a story, Nizam Sakka was an adventure-filled ride, which touched upon a variety of human emotions, making it a play worth watching.