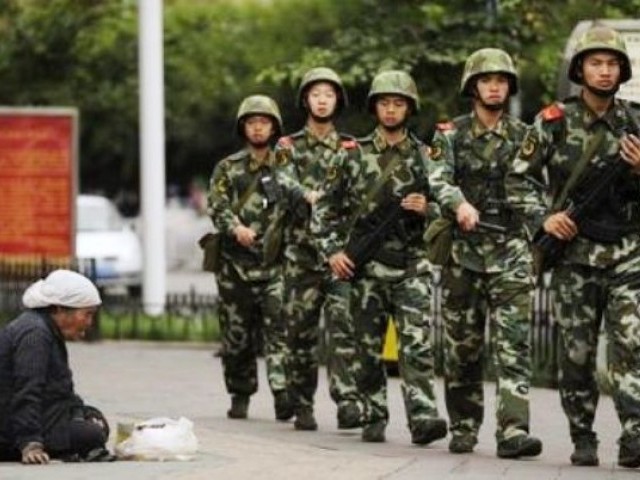 China has blamed terrorists trained in Pakistan for an outbreak of deadly violence and imposed heavy security on Monday in a bid to prevent further unrest.

Nineteen people were killed in two separate incidents in the ancient Silk Road city of Kashgar over the weekend in the latest wave of violence to hit the restive Xinjiang region, home to a mainly Muslim Uighur minority.

The Kashgar local government said in a statement on its website that the assailants who attacked a restaurant that left six dead on Sunday had learned explosive-making skills in terrorist-run camps in Pakistan.

“The heads of the group had learned skills of making explosives and firearms in overseas camps of the terrorist group East Turkestan Islamic Movement (ETIM) in Pakistan before entering Xinjiang,” the online statement said.

Chinese authorities have accused the ETIM, which wants an independent homeland for Xinjiang’s Uighurs, of orchestrating attacks in the region on many occasions.

The US and the United Nations have listed the group as a “terrorist” organisation and China has previously said it has operations in Pakistan as well as Afghanistan.

But Pakistan said it would “continue to extend its full cooperation and support” to China’s government against the ETIM.

However, Xinjiang expert Michael Dillon told AFP there was little evidence the group had any links to Pakistan.

“What we’re seeing now is a repeat of China’s complete unwillingness to see that unrest inside its borders might stem from poor conditions,” said Dillon, an academic and author of the book “Xinjiang, China’s Muslim Far Northwest”.

Many of Xinjiang’s roughly nine million Turkic-speaking Uighurs are unhappy with what they say has been
decades of political and
religious repression, and
the unwanted immigration of China’s dominant Han ethnic group.

This tension has triggered sporadic bouts of violence in the resource-rich and strategically vital region bordering eight countries, including Afghanistan and Pakistan.

Sunday’s attack came less than 24 hours after eight people were killed and more than 20 others injured at a night market in Kashgar by two knife-wielding assailants, according to authorities.

The Kashgar government statement did not mention the night market attack, but some state media reports  on Monday blamed both incidents on “terrorists”.