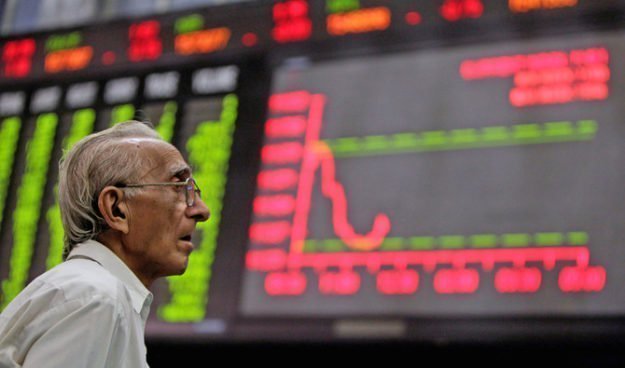 KARACHI: The bearish trend continued at the stock market on Friday as the KSE-100 index slipped further amid lacklustre trading interest.

The benchmark index opened up and after a brief advance the momentum could not be sustained. Investors remained on the sidelines as confidence stood low, which resulted in a continued slide in the index.

The downturn came on the back of concern over International Monetary Fund (IMF)’s projection of surging government debt coupled with poor data of oil and cement sales for April 2020.

Furthermore, despite optimism that the government could move to ease lockdowns further from the coronavirus outbreak, investors’ sentiment remained dented.

Arif Habib Limited, in its report, stated that the KSE-100 index traded in a narrow band of between +197 points and -145 points, closing the session down by 36 points. “The session had low volumes compared with the recent sessions.”

Selling pressure was evident in banking, exploration and production, and cement sectors.

“International oil prices had little impact on investor sentiment, which had been affected more by the upcoming MSCI rebalancing,” it said.

JS Global analyst Maaz Mulla said the market blew hot and cold, hitting an intra-day high of +197 points and dipping to a low of -145 points before finally closing at 33,267 (-36 points).

“On the news front, the National Coordination Committee (NCC) decided to substantially ease the lockdown from May 9 after consultations with provinces and reaching a consensus. However, the provinces did not agree on opening the public transport,” he said.

“Moreover, President Arif Alvi has formally summoned a special session of the National Assembly on Monday to hold debate on the negative impact of Covid-19 on country’s economy and related matters,” Mulla added.

“Moving forward, we expect the market to trade sideways as the consolidation phase continues. However, investors should take the opportunity to accumulate stocks as the medium to long-term trend remains bullish,” the analyst said.

Overall, trading volumes fell to 88 million shares compared with Thursday’s tally of 176 million. The value of shares traded during the day was Rs3.8 billion.

Shares of 330 companies were traded. At the end of the day, 139 stocks closed higher, 166 declined and 25 remained unchanged.

Foreign institutional investors were net sellers of Rs322.4 million worth of shares during the trading session, according to data compiled by the National Clearing Company of Pakistan.