Musk announced the birth of his baby on Tuesday 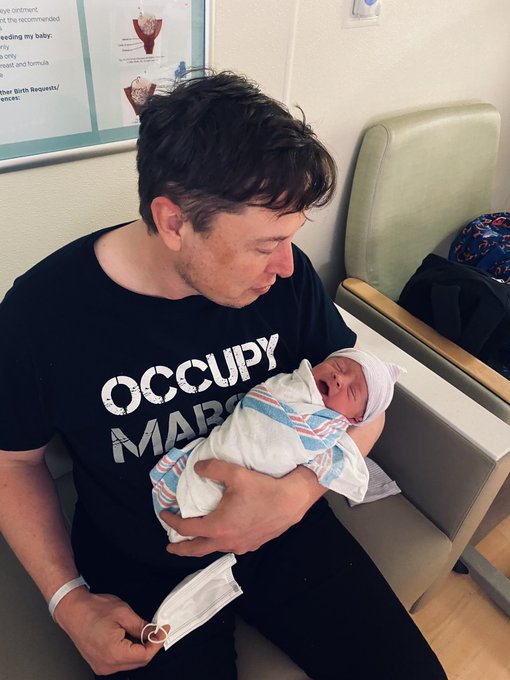 Tesla CEO Elon Musk announced the birth of his baby with singer Grimes on Tuesday, and the couple has decided to give their kid a rather interesting (?) name...

When asked by a user on Twitter about the child's name, Elon replied, "X Æ A-12 Musk", but many were confused whether he was serious or just trolling, but the mother, Grimes, seems to be serious about the name.

The Genesis singer took to Twitter to explain the name of their child - unless it turns out to be an elaborate prank by the couple.

"X, the unknown variable. Æ, my elven spelling of Ai (love &/or Artificial intelligence). A-12 = precursor to SR-17 (our favourite aircraft). No weapons, no defences, just speed. Great in battle, but non-violent. A=Archangel, my favourite song," she wrote.

•X, the unknown variable ⚔️
•Æ, my elven spelling of Ai (love &/or Artificial intelligence)
•A-12 = precursor to SR-17 (our favorite aircraft). No weapons, no defenses, just speed. Great in battle, but non-violent 🤍
+
(A=Archangel, my favorite song)
(⚔️🐁 metal rat)

Naturally, the name sent Twitter meme lords into overdrive, with thousands of tweets discussing the baby's name, with many making jokes about the baby being a robot communicating in computer codes.

the only test X Æ A-12 won’t be able to pass pic.twitter.com/hEEclMV1ZV

Dinner when u spend the night at X Æ A-12 house pic.twitter.com/RHRvZXyERI

Many also took jibes at how the name was alien-esque.

the name for the ligature Æ is “ash”, the Lockheed A-12 was part of the Archangel internal design effort.
when you combine the X, ‘ash’ and A, the name could actually be pronounced ‘Sascha 12’.
the baby's name is Sasha Archangel and frankly, i don't wanna mess with this alien. https://t.co/jAofgDAZ7e

it took me all fucking day to realize that X Æ A-12 is not a message from the newly discovered aliens BUT IS ELON MUSKS SONS NAME?!

There are also quite a few theories on how to pronounce ‘X Æ A-12 Musk’.

me: how do u pronounce that?

Many people have shared their theories behind the actual name as well, and keeping in accordance with Grimes' own explanation, many people believe that the baby might have the middle name Archangel, because of the A-12 - the Lockheed A-12 fighter jet’s original code name was ‘Archangel’.

As for the X and Æ; one follower guessed ‘Xavier’ but Elon already has a son with that name.  Other guesses include Neal, Alexander and Sasha. There's also speculation that Æ refers to the ligature Ash.

According to The Guardian, Grimes cleared things up, and it’s possible the baby is really named Xai Archangel Musk.