A file photo of Safoora Zargar, 27, who was arrested after communal violence erupted against controversial Citizenship Amendment Act. PHOTO: TWITTER/(@Safoora Zargar)
Amnesty International has heavily crticised New Delhi over the "ruthless" arrest of a three-month pregnant activist in the country's capital after communal violence that erupted against the controversial Citizenship Amendment Act (CAA).

At the time of her arrest, Safoora Zargar, a research scholar at @jmiu_official, was 3 months pregnant.

The Government of India has ruthlessly arrested a pregnant woman and sent her to an overcrowded prison during #COVID19!

Safoora Zargar, 27, a research scholar from Jamia Millia Islamia (JMI) University, was taken into custody April 10 by Delhi police for her alleged involvement in the February Delhi riots.

"India is intimidating, harassing and arresting numerous journalists, activists and students through the use of repressive laws," the human rights watchdog's statement reads. 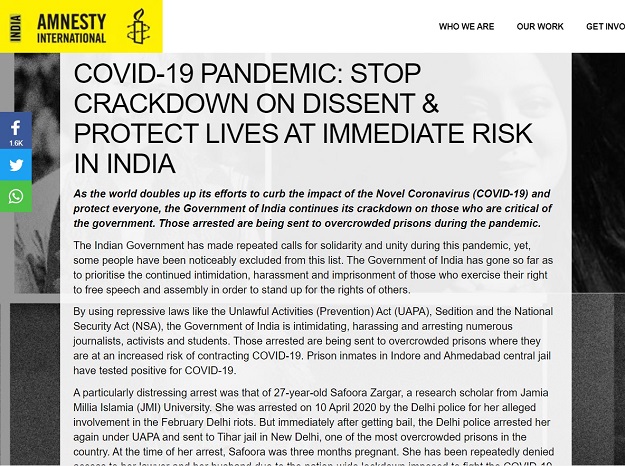 After inmates from prisons in Indore and Ahmedabad tested positive for Covid-19, Amnesty International also voiced concern over those arrested being sent to overcrowded jails despite the outbreak of the deadly virus.

"Immediately after getting bail, the Delhi police arrested her again under the Unlawful Activities Prevention Act and sent to Tihar jail in New Delhi, one of the most overcrowded prisons in the country. At the time of her arrest, Safoora was three months pregnant. She has been repeatedly denied access to her lawyer and her husband due to the nation-wide lockdown imposed to fight the Covid-19 pandemic," the statement goes on to read. 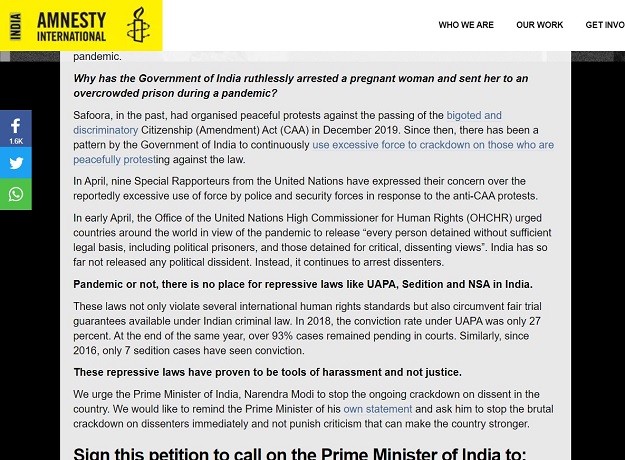 Safoora, in the past, organised peaceful protests against the passing of the "bigoted and discriminatory" CAA in December 2019.

"Since then, there has been a pattern by the Government of India to continuously use excessive force to crackdown on those who are peacefully protesting against the law," says Amnesty.

Zargar is accused of being a key "conspirator" in the February violence after supporters of the Hindu nationalist government attacked peaceful sit-ins.

At least 53 people were killed, mostly Muslims, in the worst violence in the capital since the 1984 anti-Sikh riots.

When their was violence going on in Delhi i have Conducted live Interview of @SafooraZargar she was totally against of that Violence. She was helping volunteering to get people out of that Situation.
Reality is Different!!#ReleaseSafooraZargar #SaffronFlag #ReleaseJMIPeople pic.twitter.com/AibAXPCJNh

"She was the strongest women voice in the JCC but, she wasn't there to just be in the spotlight unlike some others", said Kausar Jan, an art student, who along with others had painted protest art on the walls of the university.

One of Zargar's teachers described her as "outspoken and hard working". "I really hope that the judiciary will consider her academic record and her medical condition and release her soon," she said, requesting to remain anonymous.

At least 30 people died and over 200 injured over 3 days of rioting in New Delhi during Trump's state visit to India.

Police have imposed a curfew as the capital saw its worst communal violence in nearly 3 decades. More: https://t.co/SvBctoSlWe pic.twitter.com/7gwszRVWeJ

A member of the JCC, who also wished to remain anonymous, said the arrests amid the coronavirus pandemic were to ensure that the anti-CAA movement died a slow death, even after the lockdown is lifted.

On February 10, Zargar had fainted after being caught in a scuffle between the police and students, and had to be hospitalised briefly.

"Since then, with her advancing pregnancy a concern, she had gradually restricted her physical movement. And after the outbreak of Covid-19 she had virtually stopped stepping out of the house except for essential work. She was mostly working from home," her husband, who requested his name not be used told.

Donald Blome takes oath as US envoy to Pakistan