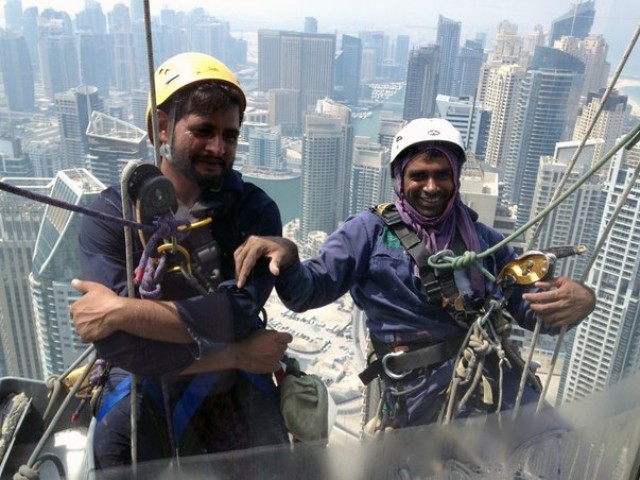 As many as 13,000 Pakistanis working in the UAE have lost their jobs due to Covid-19 outbreak. PHOTO: AFP/FILE

ISLAMABAD  : As many as 13,000 Pakistanis working in the United Arab Emirates (UAE) have lost their jobs due to Covid-19 outbreak, the Foreign Office said on Thursday, as global economy faced the worst recession since the Great Depression of the 1930s.

The UAE and other Gulf countries, which host 4.5 million Pakistani workers, are hit hard by the Covid-19, as oil prices plummeted to a record low. Officials here worry that the crisis may lead to job losses of tens of thousands of Pakistanis that would also negatively impact remittances.

Speaking at a weekly briefing, Foreign Office spokesperson Aisha Farooqui said at least 13,000 Pakistanis lost their jobs in the UAE since the outbreak of Covid-19. However, she added that the more than 50,000 expatriates seek to return to the country. “As per data available with the Foreign Office, more than 50,000 Pakistani citizens are expected to return in the near future from the Middle East,” she said.

Authorities are still working on how many have actually lost their jobs from these 50,000 Pakistanis, who have registered themselves with the foreign missions in the Gulf countries for return.

Foreign remittances are critical for Pakistan’s foreign exchange reserves as millions of Pakistanis, mostly those in the Gulf send around $24 billion annually. The Covid-19 outbreak will likely see a decline in remittances, making it difficult for the government to manage the fiscal affairs.

The spokesperson welcomed the recommendation of the United States Commission on International Religious Freedom (USCIRF) to put India on the Countries of Particular Concern (CPC) list over the drastic downturn in religious freedoms under Prime Minister Narendra Modi.

“The report acknowledges that the present Indian government used its strengthened parliamentary majority to institute national-level policies violating religious freedom across India, especially for Muslims, most notably, enactment of the Citizenship (Amendment) Act,” she said.

The report also referred to India’s illegal and unilateral actions in occupied Kashmir on August 5, 2019, in which the Indian government imposed harsh measures, including restriction on movement and assembly, internet and telephone blackout, and arrest of Kashmiri leaders, including religious leaders.

“The recommendations of the reports are consistent with the facts on ground and Pakistan’s stance that the Modi regime is deliberately discriminating against minorities in pursuit of its extremist right-wing Hindutva agenda,” Aisha said.

“We also condemn New Delhi’s response to the report calling USCIRF an ‘organisation of particular concern’, which is testament not only to India’s failure to take responsibility for its own actions but also India’s delusional self-perception,” she added.

The spokesperson said the international community was taking cognisance of the hate-mongering policies against minorities in India. “Pakistan has consistently sensitised and drawn the attention of the world towards this. Recently, Foreign Minister Shah Mahmood Qureshi addressed letters to the OIC secretary general and his counterparts in the OIC,” she added.

The foreign minister sensitised them towards this hate-mongering as part of the RSS-BJP dispensation’s anti-Muslim and anti-minority agenda, based on the extremist “Hindutva” ideology, Farooqui told reporters.

The foreign minister apprised the OIC secretary general of the BJP government’s systematic campaign to demonise Muslims by holding them responsible for the spread of coronavirus. He underscored that Indian actions were in contravention of international conventions and seriously undermine global efforts for religious harmony during these challenging times.