UNICEF says impact to be felt by vulner­able age group for years to come.
By AFP
Published: July 31, 2011
Tweet Email 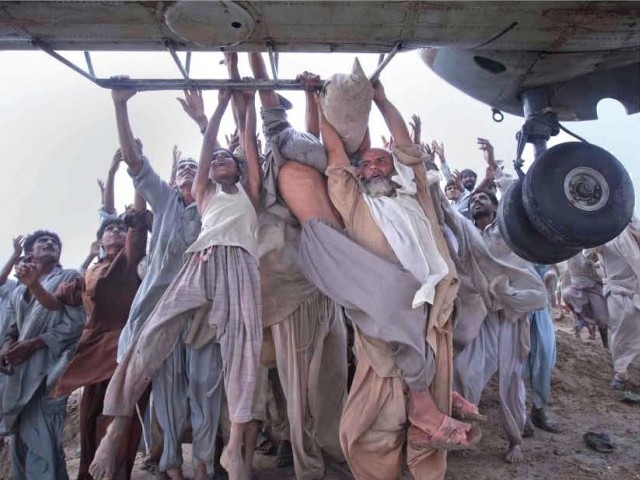 Flood victims, including Mohammed Farhan, 12, and Allah Dita, 64, look to escape in Daya Chokha Gharbi village; and (R) Farhan and Dita, nearly one year later, with residents from the same village in the same location. PHOTO: REUTERS

The United Nations Children’s Fund (UNICEF) reported on Friday a shortfall of more than $50 million in meeting the needs of children critically affected by last year’s floods.

The impact of the devastating floods will continue to be felt for years to come, especially by children, a demographic that is most vulnerable to the impacts of disaster, the agency said.

New and continued assistance is required to ensure that flood-affected children and families do not enter a downward spiral of increasing vulnerability, according to UNICEF’s press release. If children remain untreated for malnutrition, for example, they are more susceptible to disease as well as life-long stunted growth and cognitive impairment.

The areas which remain severely under-funded are water, sanitation and hygiene, education, and health. In addition, $6.2 million are needed for nutrition intervention because of severe levels of malnutrition in the flood-affected children.

UNICEF emphasised that displaced children and their families had returned to their areas of origin to find their homes, livelihoods, infrastructure including health facilities, and almost 10,000 schools damaged or destroyed.