Torment in Ecuador: virus dead pile up in bathrooms 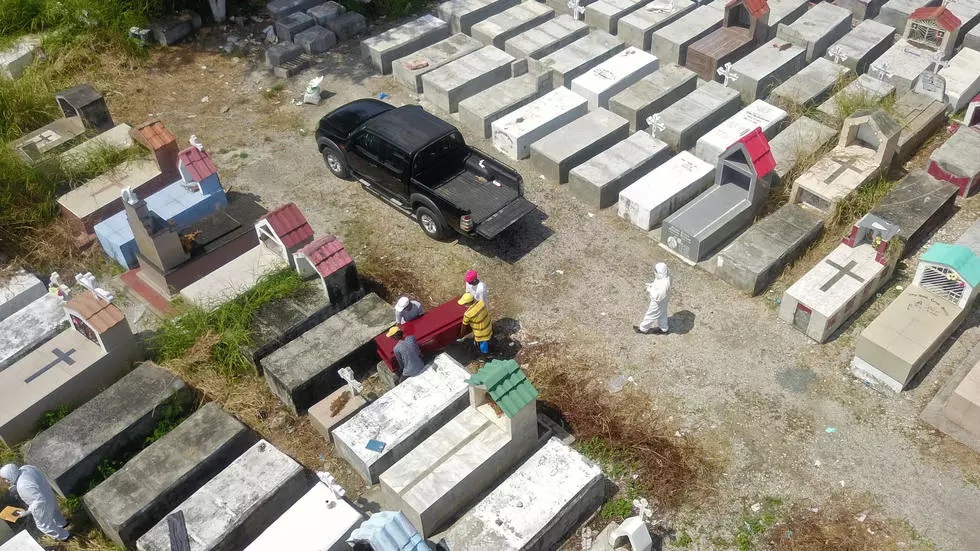 Front line medics in one of Latin America's coronavirus epicentres are lifting the lid on the daily horrors they face in an Ecuadoran city where the health system has collapsed.

In one hospital in Guayaquil - overwhelmed by Covid-19 patients, staff have had to pile up bodies in bathrooms because the morgues are full, say health workers.


In another hospital, a medic said that doctors have been forced to wrap up and store corpses to be able to reuse the beds they died on.

Ecuador has recorded close to 23,000 Covid-19 cases and nearly 600 deaths, with Guayaquil by far its worst affected city. But the real toll is thought to be far higher.

A 35-year-old nurse at the first hospital, who spoke on condition of anonymity, said that the trauma of what he saw had affected him professionally and personally.

When the health emergency broke out in March, every nurse went from caring for 15 to 30 patients in the space of just 24 hours, he added.

"So many people arrived that...they were practically dying in our hands," said the nurse.

Other patients were discharged or referred to other facilities "to free up all these beds" for coronavirus patients, he told AFP.

"They took out anesthesia machines from operating rooms to replace them with ventilators.

"People are alone, sad, the treatment wreaks havoc on the gastrointestinal tract, some defecate; they feel bad and think they will always feel that way, and they see that the person next to them starts to suffocate and scream that they need oxygen."

It isn't just hospitals that have been overwhelmed, but morgues too.

"The morgue staff wouldn't take any more, so many times we had to wrap up bodies and store them in the bathrooms," said the nurse.

Only when the bodies were "stacked up six or seven high did they come to collect them."

A 26-year-old colleague of his, also a nurse, confirmed the chaotic scenes.

Guayaquil's health system has collapsed under the pressure of Covid-19, and it seems to be having catastrophic knock-on effects.

In the first half of April, the province of Guayas - the capital city of which is Guayaquil - recorded 6,700 deaths, more than three times the monthly average.


The disparity suggests that the actual death toll from Covid-19 is far greater than the official nationwide tally of fewer than 600.

President Lenin Moreno has acknowledged that Ecuador's official coronavirus tallies "are short" of the true figures.


A 28-year-old doctor at a second Guayaquil hospital, who also insisted on anonymity, conjured a similarly grim picture of health services in crisis.

"Bodies were in the corridors of the emergency ward because the morgue was full," the medic told AFP, describing "20 to 25 corpses" waiting to be taken away.

"It was up to us to collect and wrap the corpse and store it so we could disinfect the bed for the next patient," he added.

At the first hospital, refrigerated containers were brought in to store bodies, some of which remained for up to 10 days.

Some family members "break the covers...so the fluids come out. It's a sanitary disaster," said the 35-year-old male nurse.

'It kills you psychologically'

The number of daily deaths fell last week but that was scant consolation for this nurse, who says he is tormented by what he has experienced.


When he goes home, after a 24-hour shift, his feet hurting, he tries to rest but then the "nightmare" strikes.

He dreams of running until he falls and knocks "open the bathroom door with the number of bodies...and you can't go back to sleep."


His home life has also changed. He is following strict isolation so cannot see his parents or brother.

When he goes home he begins his ritual of disinfecting his car and shoes, hosing himself down on the patio before washing his clothes in hot water.

"I eat on a plastic table away from everyone. I leave my home with a mask, I can't hug anyone, not even the pets," he said.

Every now and then he thinks about the psychological mark left on him every time he has to make do with hooking patients to cannula tubes when what they really need is a ventilator.

"They tell you, 'It's okay - give them oxygen and a slow drip serum and leave them,'" he said.

"But what if that was my mom? What if it was my dad? That kills you. It kills you psychologically."

AFP sought comment from health authorities in Guayaquil but did not get a reply.

A national public health authority official said he had been in an emergency unit in Guayaquil where bodies were piled up.

"A morgue for eight deceased persons and you have to manage 150 bodies, what can you do? You have to put them anywhere nearby that you have space," he told AFP.

The official said the number of cases in Guayaquil rose dramatically and rapidly in a matter of days, overwhelming an inadequate emergency healthcare system.