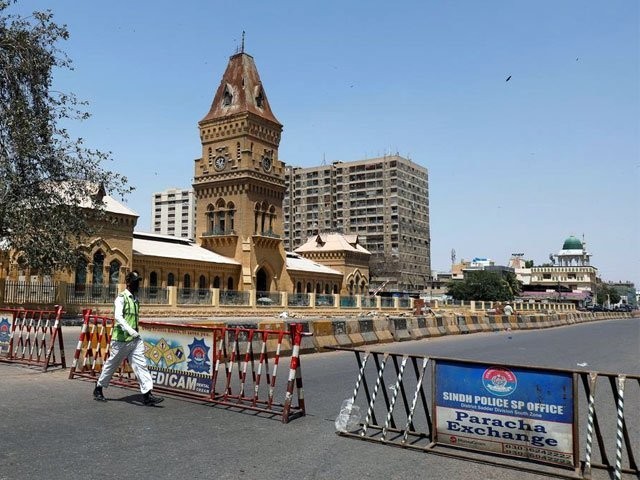 ISLAMABAD: For the first time in nearly seven decades, Pakistan’s economy is expected to post a negative growth rate of about 1.6% this fiscal year, the finance ministry said on Tuesday, confirming the recession forecasts by leading global financial institutions because of the coronavirus pandemic.

The ministry warned against relaxing the ongoing lockdown in the country, which is in its sixth week. It cautioned that this could increase the infection rate and put unbearable burden on the already exhausted health system.

“In the worst-case scenario, the growth rate could remain negative, at -1.57 per cent of GDP,” the ministry said in a statement, issued after a high-level huddle, chaired by Adviser to Prime Minister on Finance and Revenue Dr Hafeez Shaikh.

The meeting in the Q Block was attended by leading development partners of the country, including World Bank, the Asian Development Bank (ADB), the Department for International Development (DfID) and the United Nations Development Programme (UNDP).

The ministry advised against relaxing the six-week lockdown, warning that this could increase infection rate and put unbearable burden on the health system. It emphasised that the second tranche of cash grants to those affected by the lockdown and closure of businesses, would be required to further the relief efforts.

The World Bank and the IMF have projected negative economic growth rate in the range of 1.3% to 1.5%, respectively. The IMF has termed the recent crisis as “Great Lockdown”, that is expected to slash $9 trillion from global growth.

According to the IMF, the world economy would contract by 3% this year – the most severe downturn since the Great Depression in 1930s. The situation could get much worse if the pandemic lingers into the second half of the year or resurges.

The finance ministry further stated that the budget deficit could rise to a record 9.6% of the GDP or Rs4 trillion by June this year, while the negative growth could persist for the whole of 2020. “It was also felt that there would be negative growth throughout 2020 and the chances of recovery were expected from the start of 2021”, according to the statement.

The high-level meeting underlined several challenges the country was likely to face on the economic front due to the impact of Covid-19 on the national, regional and global economy.

“The meeting also warned against the relaxation of the lockdown which could further increase the infection rate and put unbearable burden on the healthcare system which was already finding it hard to provide regular healthcare services due to increased focus on dealing with the COVID-19,” said the statement.

The National Coordination Committee has extended the lockdown till May 8 and there were chances of further increase in the lockdown period. The confirmed coronavirus cases in Pakistan had topped 14,500 as of Tuesday.

The meeting agreed that while it was too early to predict the impact of Covid-19 but if the crisis persisted, the manufacturing and service sectors as well as the exports were likely to be severely affected in 2020. However, it said the agriculture growth was likely to remain intact.

The participants noted that due to an extended economic crisis, the fiscal deficit could rise to 9.6% of the GDP while the impact on the poverty figures could also be higher due to closure of businesses and restricted economic activity because of the lockdown situation.

it was pointed out that the Covid-19 crisis had drastically affected the global economy. The meeting underlined the need for pursuing a clear, transparent and unified plan of action, combining a “whole of the country” approach backed by necessary constitutional measures to sail out of the crisis.

Expenditure rationalisation, particularly reduction in low-impact spending, and revenue generation were also emphasised as key areas of focus in coming months. It was felt that the construction sector could provide the key for resurgence of the economic activity.

It was also noted in the meeting that the speed, efficiency, and transparency with which Pakistan had already disbursed more than Rs75 billion to its millions of vulnerable population was unprecedented not only in Pakistan but in the entire region.

It was suggested that Pakistan would be required to “reset and reboot” its economy to get above the red line. In the meeting, the ADB showed interest in giving local currency loan to Small and Medium Enterprises (SMEs), which were adversely affected by this crisis.

The ministry statement came a month before a National Accounts Committee (NAC) meeting, which will be chaired by the planning secretary, to approve economic growth figures for fiscal year 2019-20.

Separately, the Finance Ministry rejected the World Bank’s estimates of 23% reduction in the remittances to $17 billion this year. It hoped that the foreign remittances would remain in the range of $20 billion to $21 billion.