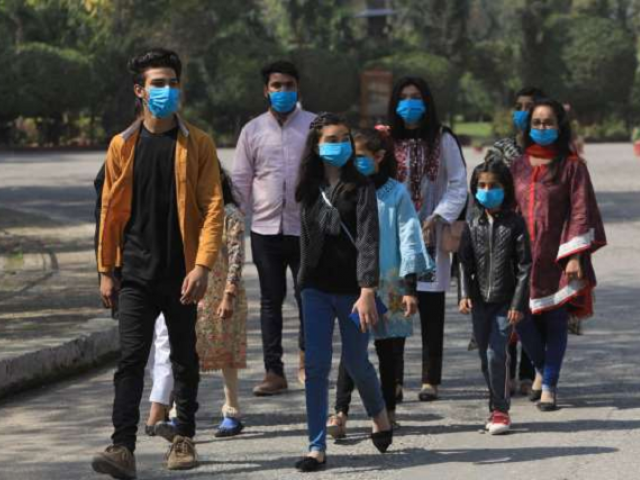 Volunteers wear masks as a preventive measure against the coronavirus, as they walk during an awareness compaign by a NGO at the premises of the St John Cathedral in Peshawar. PHOTO: Reuters

PESHAWAR: The healthcare system in Khyber Pakhtunkhwa is living its worst nightmare as the Covid-19 virus makes substantial gains.

According to the health department, a total of 120 new cases were reported on Monday, taking the provincial tally to 533. As the super spreader rages across the province, it has claimed more than 100 lives and infected a total of 1,984 people.

The spread, one medical professional said exposes the healthcare system’s failures. The healthcare system, he said, can only conduct 135 tests per million people, which is significantly lower than other provinces. Whereas, in Punjab, the total testing capacity stands at 372, Sindh at 444, and Balochistan at 390 per million.

According to Dr. Siraj Ul Islam, a medical practitioner in the province, the highest number of positive patients are aged 50 to 59 years old. The fatality rate, he said, rises with age.

“Healthcare sector has not been on the priority list of the provincial government,” said Dr. Islam. “700 positions are still vacant. The government has failed to appoint critical care staff, specialists, and virologists,” he claimed.

Another medical professional pointed out that the lack of proper protective gear is imperiling the ability of healthcare workers to fight the coronavirus. “Personal Protective Equipment is short in districts and far-flung areas of the province,” said Dr. Rizwan Kundi, President Young Doctors Association in K-P.

The minister was quick to dismiss comments about the lack of facilities in K-P. “Our doctors are trained to handle such situations. The professionals have what they need to fight Covid-19,” Jagra said.