US says would recognise Israel annexation of West Bank

Back at work, British PM warns against easing virus lockdown 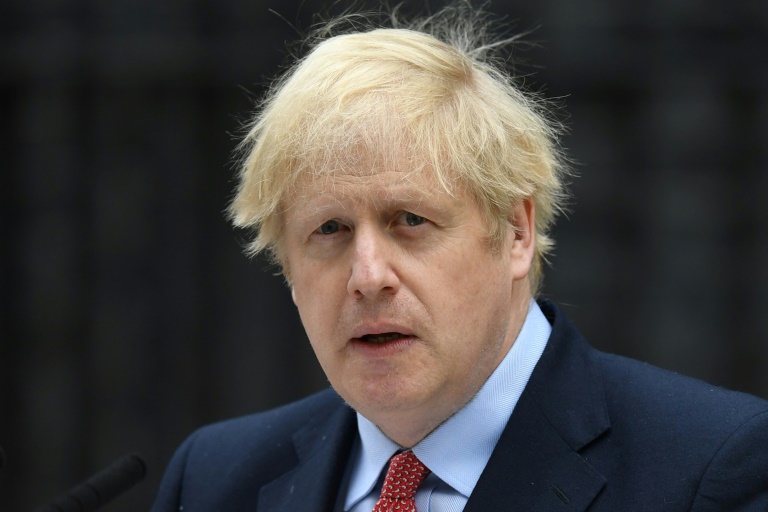 Prime Minister Boris Johnson gives his first Downing Street statement since being hospitalised with coronavirus. PHOTO: AFP
LONDON: Prime Minister Boris Johnson on Monday made his first public appearance since being hospitalised with coronavirus three weeks ago, saying Britain was beginning to "turn the tide" on the outbreak but rejecting calls to ease a nationwide lockdown.

In a statement in Downing Street marking his return to work, looking thinner and with his trademark blond hair a little more unruly than usual, Johnson apologised for being away "for much longer than I would have liked".

He thanked the British people for heeding more than a month of stay-at-home orders, saying their action had helped ensure the state-run National Health Service (NHS) had not become overwhelmed.

"That is how and why we are now beginning to turn the tide," Johnson said, echoing his promise on March 19 that Britain could turn the tide on the outbreak in three months if people followed social distancing rules.


But more than 20,000 people have already died in Britain, not including deaths in care homes and in the wider community, making it one of the worst hit countries in the global pandemic.

Britain recorded 360 more deaths on Monday, its lowest daily toll since last month, and Johnson acknowledged growing demands for the lockdown to be lifted to reduce the economic impact, but insisted now was not the time.


"I refuse to throw away all the effort and the sacrifice of the British people and to risk a second major outbreak, a huge loss of life and the overwhelming of the NHS," he said.

Johnson, 55, became the most high-profile world leader to contract Covid-19 one month ago.

He spent a week in hospital, including three nights in intensive care, admitting in a video message after he was discharged that things "could have gone either way".


After a fortnight recovering at his countryside retreat of Chequers, he returned to Downing Street on Sunday night.

On Monday morning he chaired the daily government coronavirus meeting, "and will now be resuming full duties", his spokesperson said.


In Johnson's absence, the government has faced increasing criticism over its response to the outbreak.

Healthcare professionals still complain about a lack of protective masks and gowns, while a target to test 100,000 people a day by the end of April looks hard to reach.

Most importantly, even as debate continues about whether Britain was too slow in ordering shops to shut and telling people to stay at home, Johnson must decide by May 7 whether to renew the measures.

After dire predictions from the Bank of England that Britain could face its worst recession in centuries, a senior Conservative MP, Graham Brady, said the economy must start moving again.


But Johnson said this would only happen when the outbreak was under control, infection rates had fallen and issues of testing and equipment were resolved.

Even then, he said it would be a phased return in what Foreign Secretary Dominic Raab -- who deputised for Johnson during his absence -- has called a "new normal".


The government could "begin gradually to refine the economic and social restrictions, and one by one to fire up the engines" of the economy, Johnson said.

He declined to give further detail but promised to be more transparent about the process and to work with opposition parties.

The government also changed the format of its daily press briefing, allowing the public to submit questions to ministers and experts.

The questions were chosen by an independent polling company and no advance notice was given to the respondents, officials said.

Chief medical officer Chris Whitty warned in the briefing that it was "plausible" that a rare but dangerous inflammatory syndrome affecting children in Britain was linked to coronavirus.

"We have asked experts to look into it as a matter of urgency," added NHS England medical director Stephen Powis.