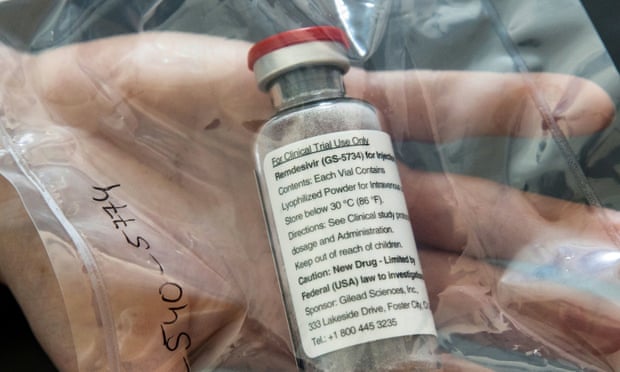 The antiviral medication remdesivir. The WHO said a document on the drug’s efficacy in treating the novel coronavirus still awaited peer review. PHOTO: REUTERS

The World Health Organisation has revealed that the first trial of Remdesivir, a potential drug for treating the deadly coronavirus, has had no effect on patients, The Guardian reported.

The British daily reported that the “gold standard” trial of 237 patients, some of whom received Remdesivir while others did not work.

“The trial was also stopped early because of side-effects.”

The WHO had posted the news of the failure on its website but later removed it, saying the result was uploaded too soon by ‘accident’.

“A draft document was provided by the authors to WHO and inadvertently posted on the website and taken down as soon as the mistake was noticed. The manuscript is undergoing peer review and we are waiting for a final version before WHO comments,” said Tarik Jasarevic, a WHO spokesperson.

About 158 patients were administered Remdesivir, while 70 were given a placebo medicine. Almost 14 per cent of those who took the drug died compared with nearly 13 per cent of those not taking the treatment, the news article reported.

However, the recovery time of both groups was the same.

“In this study of hospitalised adult patients with severe Covid-19, [which] was terminated prematurely, Remdesivir was not associated with clinical or virological benefits,” said the report on the WHO website.

The report added, “Remdesivir was stopped early in 18 (11.6pc) patients because of adverse effects, compared with 4 (5.1pc) in the control group”.

Details of side effects of the drug, which caused trials to stop, were not cited in the report.

A week earlier in Chicago, researchers at Gilead (the biopharmaceutical company making the drug) ran a trial of Remdesivir on 125 patients.

All the patients were discharged within a week. However, since there was no placebo group in the trials. researchers were not sure if it was the medicine or something else that showed promising results.

Hydroxychloroquine is another drug that is being touted as an effective drug against Covid-19. However, the rush of administering the drug to coronavirus patients has caused a shortage for people who take it for lupus, which affects the immune system.