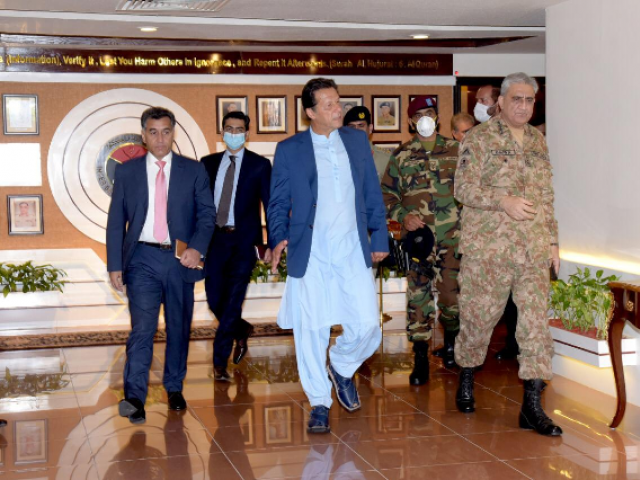 ISLAMABAD: Prime Minister Imran Khan on Thursday surprised the nation when he revealed during a live ‘Ehsaas Telethon’ that the government was using the Inter-Services Intelligence (ISI) technology to trace the suspected Covid-19 patients.

“The government is using a system, which was originally designed to trace terrorists, to find the suspected coronavirus cases,” Premier Imran said during a live programme held to generate funds to mitigate the impact of the virus-induced lockdown.

The massive fund-raising programme was organised by the government and private TV channels to generate funds to help the marginalised segments of society amid the economic crisis spawned by the outbreak of the Covid-19 pandemic. Cricketers, singers, actors, businessmen, overseas Pakistanis and several others called during the telethon while the premier continued responding to queries of journalists and callers.

“Tracking and testing of patients is the only way to reopen businesses. No single government can battle the pandemic,” the prime minister said, urging the entire nation to join hands to fight the virus keeping in mind the “difficult economic times ahead”.

He rebuffed the notion that an indefinite lockdown is the only option to stop the virus from spreading, saying that decisions should be made for all Pakistanis and not just the elite.

“The country will have to move towards a smart lockdown as a balance needs to be struck between keeping people safe and ensuring the coronavirus does not spread.”

The prime minister recalled his conversation with the US president. “I spoke to Trump. Even he is concerned at the economy collapsing, despite their resources. Everyone agrees it is unsustainable,” he said. “Every country will have to adjust according to its conditions.”

An overseas Pakistani called and pledged to donate Rs10 million to the PM Relief Fund, if the prime minister helped him get back his land illegally occupied by “Mansha Bomb”.

“We will help you even if you don’t donate,” Imran said, as the anchorpersons burst into laughter when one of them quipped that “someone is trying to fix a match here”.

Describing the Ehsaas Telethon, Imran said that the government took 10 months to make the database for the programme and the police as well as the Federal Investigation Agency officials would not only vet the beneficiaries but also ensure transparency. “This will be the most transparent programme in the country’s history,” he said, adding that the system was transparent and designed to help the poor only.

To a question whether he was planning to join hands with the opposition parties in collecting funds for the coronavirus, the prime minister laughingly said, “I’m afraid if I include them in this, the donations will drop.”

He, however, added that working with political rivals was possible only if they brought billions of rupees stacked abroad back to Pakistan.

To another question, he said that all political parties should join hands with the government during the crisis. On his experience in collecting donations for Shaukat Khanum Cancer Hospital, Imran said he had met various people from around the country and reached to the conclusion that “one’s bank balance should not be the measure of his wealth”.

“True wealth is what one feels inside,” he said. “I always tell my children and others that whenever you spend in the way of Allah, it brings you a lot of other rewards, such as the feeling of contentment.”

The government was able to collect Rs550 million at the end of the marathon session. Senator Faisal Javed Khan announced that the overall balance in the Prime Minister’s Relief Fund for Covid-19 amounted to Rs2.765 billion.