Gap narrow­s to just $6m in March due to fall in import­s amid Covid-19
By Salman Siddiqui
Published: April 24, 2020
Tweet Email

KARACHI: In line with market expectations, the current account deficit – gap between country’s higher foreign expenditure and low income – narrowed to a nominal $6 million in March 2020 mainly due to a speedy deceleration in imports in the wake of the coronavirus pandemic.

The current account deficit is 99% down compared to $823 million recorded in March 2019, the State Bank of Pakistan (SBP) reported on Thursday. “Import of goods and services both have dropped drastically…due to lockdowns globally,” Arif Habib Limited (AHL) Head of Research Samiullah Tariq told The Express Tribune.

The import of goods decreased as aggregate demand fell massively ahead of an anticipated contraction in the national economy in the current fiscal year ending June 30, 2020. The country would see the contraction for the first time in 68 years in response to the Covid-19 crisis.

The import of services declined due to the suspension of international air travel in response to the health crisis. “Earlier, travel expenses used to be the cause for widening of the current account deficit,” Tariq said. 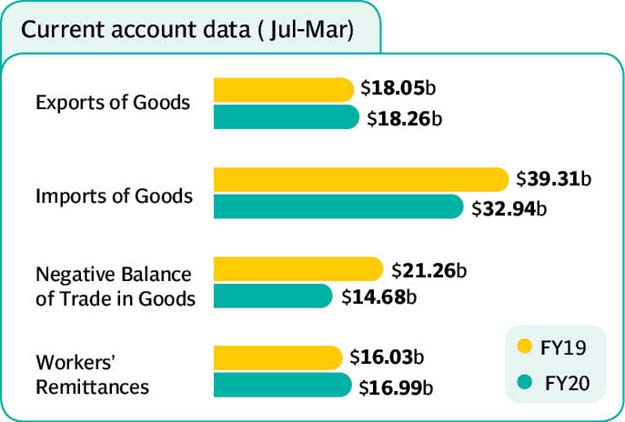 “Trends suggest the current account deficit will turn into a surplus in April. The surplus will not be huge, but to the tune of around $25-50 million,” Tariq said.

The trade deficit – gap between higher imports and low exports – stood on an average $2 billion a month in the first eight months (Jul-Feb) of the current fiscal year 2020. The deficit now came in at $1.5 billion mainly due to a slowdown in imports in March.

“The trade deficit may further shrink to $1 billion a month in the remaining three months of the ongoing fiscal year,” he added.

The AHL official said the drop would mainly come from a historic decline in crude oil prices in the international market as well as re-gasified liquefied natural gas (RLNG) prices.

The country meets 70-80% of its energy needs through imports. The energy import bill stands at one-fourth of the total imports.

“Accordingly, the current account deficit would not exceed over $3 billion for the full fiscal year compared to our previous expectation of around $4.5-5 billion. It stood at $2.77 billion in the first nine months,” he said.

At present, the nation is passing through testing times and is trying to create a balance while dealing with the health and economic crisis. However, the health crisis may persist even in June and the nation may hardly resume economic activities by that time.

“We would be lucky if the lockdown is fully lifted in June as we have limited resources to fight the disease,” he said.

The International Monetary Fund (IMF) has revised down Pakistan’s current account deficit forecast to around $4.5 billion for FY20 from over $6 billion before the pandemic hit the people and economy hard around the globe, it has been learnt.

Rupee gains as dollar falls below 160