Hospit­als in Karach­i nearly full and may not have space for more patien­ts soon, say doctor­s
By ​ Our Correspondent
Published: April 22, 2020
Tweet Email 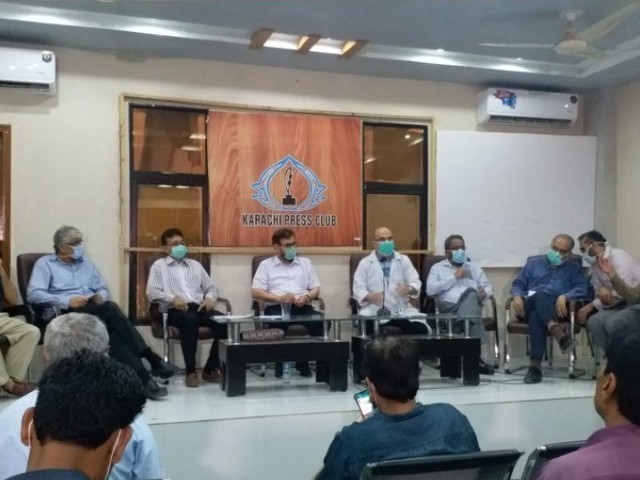 KARACHI: Urging people not to take the pandemic lightly, prominent doctors of the city demanded that the government impose a stricter lockdown.

At a press conference at the Karachi Press Club on Wednesday, the doctors warned that Covid-19 cases would continue to increase exponentially over the next four weeks, pointing out that a 40 per cent rise had been observed in a mere five days.

“We have seen a rapid increase in the numbers in last 5 days,” stated Dr Abdul Bari, the head of the Indus Hospital, adding that this came as the government eased the lockdown.

He claimed that all the dedicated critical care wards for coronavirus patients in various hospitals across the city were nearly out of capacity, disclosing that the Indus Hospital, Aga Khan University Hospital and Dow University Hospital were full while Jinnah Postgraduate Medical Centre and the Sindh Institute of Urology and Transplant were at 80 per cent saturation.

The doctors also stated that there were already about 175 stable patients at the Expo Centre isolation facility, which has a capacity of 200 patients.

Coronavirus cases expected to peak in Pakistan by end of May or early June: FM Qureshi

Predicting that the situation would worsen in the coming days, they said there may not be enough beds to admit coronavirus patients in hospital soon. “The severity is much worse than we think,” stated Dr Saad Khalid Niaz of the Dow University of Health Sciences.

Claiming that the doctors at the press conference were representing 99 per cent of those in Pakistan, he said the country did not have enough health professionals to fight the disease.

As the doctors pointed out that 162 members of the medical community had been infected in Sindh, Dr Niaz further appealed for public support, saying that they were disheartened by the situation and it would not be possible for them to battle at the frontline without support.

Pakistan Islamic Medical Association’s Dr Atif Hafeez Siddiqui, meanwhile, said that the medical community demanded a strict and complete lockdown to control the spread of the virus. Acknowledging that this could cause difficulties for the poor, he nonetheless said that people could be saved from hunger through philanthropy.

Unhappy with the ulema’s demand to reopen mosques for congregational prayers during Ramazan, the doctors appealed to religious scholars to reconsider the recent decision made on this topic.

Dr Bari said that they did not want mosques to be closed down, but only the staff should be allowed to offer prayers inside. He pointed out that since Taraweeh was not obligatory, it should be offered at home.

COAS assures nation of ‘all possible measures’ in war against coronavirus

Pakistan Medical Association general secretary Dr Qaiser Sajjad said that the government and the ulema had taken the wrong decision in allowing congregational prayers. Though mosques not following the government’s requirements would be closed, he warned that by that time, it may be too late.

“Listen carefully: we do not have space in our hospitals,” he stated, stressing the gravity of the situation.

Demanding that all shops and business activities be closed immediately, he said that the Sindh government’s lockdown was a better measure for containing the virus. “But even that is not as strict as we observed it to be at the start. Now, it is just a joke.”

Highlighting that they had called the press conference in an emergency, he asserted that the doctors in Pakistan were disturbed. “We are here to inform you that our health infrastructure is too poor. The government cannot control other diseases. How can it control this virus?”