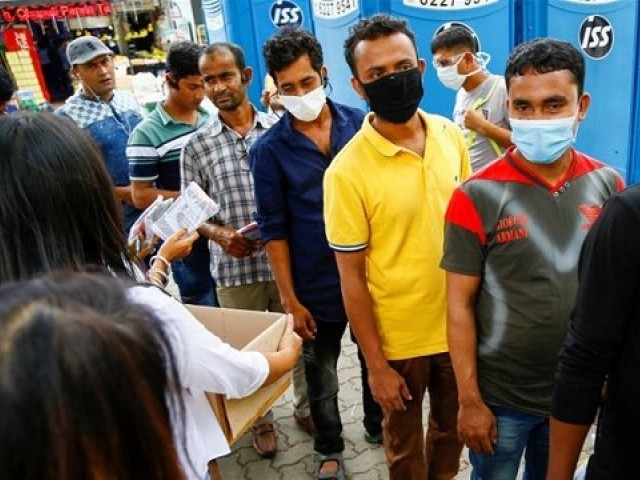 Migrant workers, mostly from Bangladesh, queue to collect free masks and get their temperatures checked, in Singapore (Photo: Reuters)

Dinesh Bhandari spent two days travelling by bus from his village in rural Nepal to Kathmandu to get a permit to take up a factory job he had been promised in Malaysia.

When he reached the Nepali capital, he found the door to the recruitment agency locked. A note on it read: “No labour permits will be issued by the government until further notice due to the coronavirus.”

The 22-year-old is one of a growing number of migrant workers hit by a wave of travel bans from Asia to the Middle East aimed at combating the virus.

“I am shocked. I don’t know what to do now,” said Bhandari, who had been promised work at a Malaysian glove manufacturer on a monthly wage of nearly $300.

About 1,500 Nepali migrants leave every day for the Middle East, Malaysia and South Korea to work mainly as domestic and construction workers, and remittances – the money they send back – make up about a quarter of Nepal’s gross domestic product (GDP).

Remittances are a crucial lifeline for families in Nepal and other countries in the region, including Bangladesh and India, which currently has more than 30 million people in jobs overseas, according to the International Labour Organization.

But travel restrictions aimed at slowing the spread of coronavirus, which has infected more than 245,000 people globally and killed more than 10,000, threaten to leave millions of South Asian migrant labourers without work.

Nepal has suspended all permits for migrant workers as part of a programme of travel restrictions that also bars its own citizens from entering the country from Europe, the Middle East and Japan until April 15.

Malaysia, where many South Asian workers go for jobs, has shut its borders to travellers and restricted internal movement until March 31.

Indian officials warn of lockdown extensions as Covid-19 cases in South Asia near 6,000

Qatar, which relies on about two million mainly Asian migrant workers for the bulk of its labour force, has banned foreigners from entering the country until the end of this month and Saudi Arabia has suspended all international flights for two weeks.

For the hundreds of thousands of families that depend on remittances for everything – from rent, school tuition and transport to groceries and utility bills – the fallout will be harsh, said Ganesh Gurung of the Nepal Institute of Development Studies.

“Lower-middle-class families will grow poorer and poverty will rise,” he predicted.

More than 7.5 million Bangladeshis work outside the country, paying up to $8,500 to go abroad, the United Nations says. Saudi Arabia is the most popular destination, according to government data.

Jahirul Islam, 30, has been in limbo since the Abu Dhabi sports academy where he worked shut down temporarily and his boss said he would not be paid for at least two months, advising him to go back to Bangladesh.

But with the Bangladeshi government this week telling workers to remain where they are and fears over whether his work visa would be renewed if he leaves, Islam is staying put.

With no wages, he is unable to send money back to his wife, brother and parents back home, and is also feeling the pinch in the oil-rich capital of the United Arab Emirates.

“I am surviving on borrowed money at the moment … It’s a really sad situation,” he told the Thomson Reuters Foundation by phone.

Bishnu Prasad Gaire, president of the Nepal Association of Foreign Employment Agencies, said up to 43,000 Nepalis were immediately affected by the bans.

Some of those unable to return home under the ban face scarce food supplies and higher costs as demand spikes, said Yubraj Nepal of the Centre for Migration and International Relations.

“The government of Nepal should think in the line of citizens’ safety not only in Nepal but also those who are working abroad,” he said.

A labour ministry spokesman said it was too early to assess the impact but the government was monitoring the situation and working on possible relief measures.

‘Set your own house in order first’: India advised as FO clarifies Kartarpur Sahib repaired within a day

No food, no passports

Despite money worries, most families said their main concern was the health of relatives working in virus-affected countries.

“Hope he remains safe and doesn’t get the virus,” said Bangladeshi mother of three, Rojina Akter, whose husband works at a ship recycling firm in Singapore, where 266 people have been infected by the coronavirus.

In India, the families of about 750 fishermen stranded in Iran – one of the countries worst hit by the epidemic – are demanding that the government bring them home.

The men have said the Gulf fishing firms that hired them confiscated their passports and then transferred them to the Iranian coast from the UAE.

Fishermen largely from southern India have traditionally migrated to Bahrain, Saudi Arabia and the UAE for lucrative jobs on fishing vessels, but have sometimes been accused by Iranian officials of trespassing.

And despite repeated assurances from Indian authorities, the men say they have been left stranded and without food.

“Why are we ignored? We have families too,” said Shanu Mariyadasan, a fisherman from India’s coastal Kerala state. “Are we supposed to die here?”

WHO warns worst of coronavirus yet to come