UAE tells Muslims to pray at home during Ramazan

UAE tells Muslims to pray at home during Ramazan 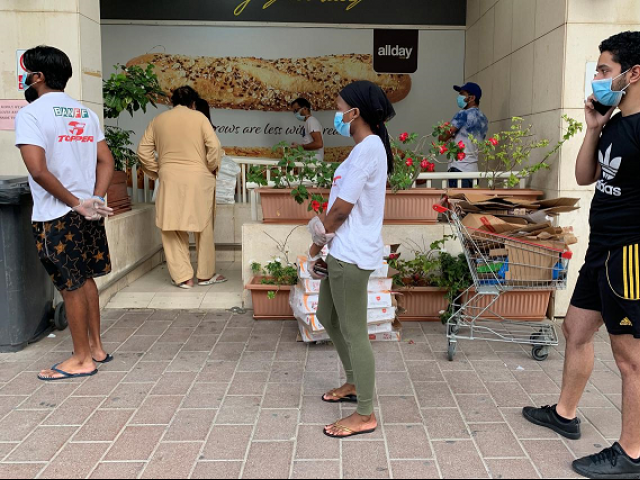 People keep distance in a line outside a supermarket to prevent the spread of the coronavirus disease (COVID-19) in Dubai, United Arab Emirates April 18, 2020. PHOTO: REUTERS

DUBAI: Religious authorities in the United Arab Emirates said medical workers treating COVID-19 patients are exempt from fasting during Ramazan and urged Muslims not to congregate for prayers during the holy month expected to start this week.

The Emirates Fatwa Council said in a statement carried on state media late on Sunday that all healthy people are obliged to fast but medical workers on the frontline of the novel coronavirus pandemic need not do so “if they fear that fasting could lead to weakening their immunity or to losing their patients”.

It said Muslims should comply with physical distancing while praying during Ramazan and the Eid Al Fitr holiday that marks its end. The UAE has suspended prayer in all houses of worship including mosques as part of containment measures.

“Congregating to perform the prayer could endanger lives, an act that is strictly forbidden in Islam,” said the statement.

The UAE, the region’s business hub, has recorded 6,781 infections with 41 deaths, the second highest count after Saudi Arabia in the six-nation Gulf Cooperation Council where the number of cases has steadily risen to surpass 26,600 with more than 160 deaths as countries ramp up testing.

Several Gulf Arab states have suspended passenger flights, imposed curfews and closed most public venues, but have seen a rise in transmissions among low-income migrant workers, many of whom live in cramped quarters. Some Gulf governments are trying to arrange repatriation flights for expatriates who have lost jobs or been put on leave.

UAE Vice-President Sheikh Mohammed bin Rashid al-Maktoum, who is also ruler of Dubai emirate, announced the launch of a humanitarian campaign on Sunday to provide 10 million meals or food parcels to communities hit by the outbreak in the country.

“Providing food for everyone, with the approach of the Holy Month of Ramadan, is a social priority in our battle against the pandemic,” he said in an English-language Twitter post. “In the UAE, no one sleeps hungry or in need. No one is left.”

Providing food for everyone, with the approach of the Holy Month of Ramadan, is a social priority in our battle against the pandemic. The crisis revealed our country’s authenticity and deeply-rooted generosity. In the UAE, no one sleeps hungry or in need. No one is left pic.twitter.com/MISKrDsl5D

Millions of foreign workers, many from Asia, form the backbone of Gulf economies and work in sectors that have been hit by the coronavirus outbreak.

The pandemic is also likely to disrupt the significant remittances those workers send back to their home countries.