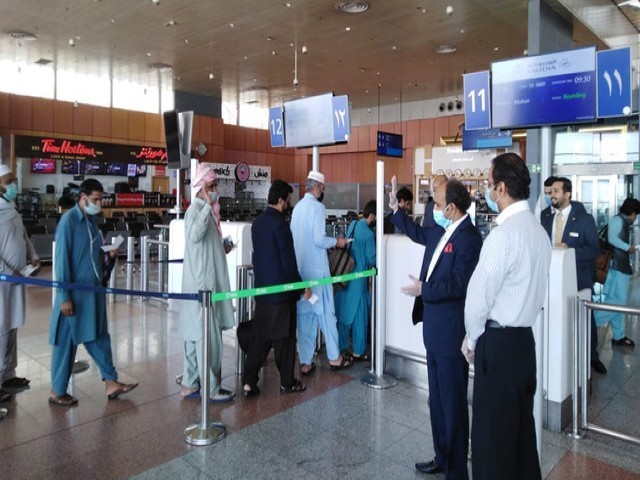 Umrah pilgrims arrive at the Jeddah airport to board a special flight to Multan on April 18. PHOTO: Courtesy: Pakistan Consulate General in Jeddah

Foreign Minister Shah Mehmood Qureshi welcomed the passengers upon arrival, who had earlier assured the nation that the federal government would bring back stranded Pakistanis in different countries.

The flight was previously scheduled to take off on Thursday, but it was postponed by the Saudi Ministry of Hajj and Umrah for administrative reasons.

The authorities are striving to bring hundreds of Pakistani nationals who are still stranded in different parts of the world by operating special flights.

The returning passengers will not only be screened for Covid-19 but would also be placed in quarantine to prevent a possible spread of coronavirus, Arab News quoted senior Pakistani officials as saying.

Each year, thousands of Pakistanis visit Saudi Arabia to perform Umrah. However, many got stuck when the coronavirus outbreak forced countries to suspend the international air travel.

Pakistan’s Consul General in Jeddah Khalid Majid and Deputy Consul General Shaiq Ahmed Bhutto were present at the airport to interact with the pilgrims before the flight departed.

Earlier on Wednesday, another Saudi flight brought back 223 Pakistanis to Lahore.