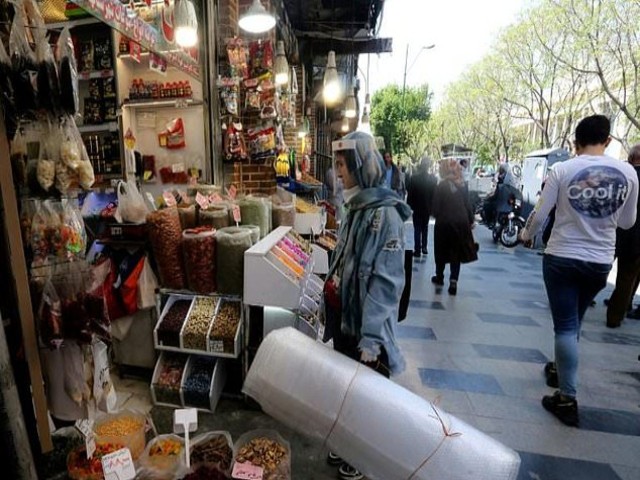 With an economy battered by US sanctions, many Iranians are reopening businesses despite the risks posed by the novel coronavirus. PHOTO: REUTERS

TEHRAN: Iran allowed some shuttered Tehran businesses to reopen Saturday despite the Middle East’s deadliest coronavirus outbreak, as many faced a bitter choice between risking infection and economic ruin.

There was a “significant” uptick in highway use on Saturday, according to Tehran’s traffic police chief, who told state TV that some anti-congestion measures had been lifted to discourage use of public transportation.

Some Tehran residents said they were concerned about the outbreak but had to go back to work as their livelihoods depended on it.

“I don’t think it’s safe yet,” said Reza Jafari, a salesman at a handbag wholesaler in the capital.

“But I had to get back to work for financial reasons. If I had the option I wouldn’t, but if the shop remains closed longer we could get laid off.”

Jafari, speaking by telephone, said retailers from other provinces had flocked to the store on Saturday to refresh their stocks, and that most shopkeepers and customers did not wear masks or gloves.

At the nearby Grand Bazaar, many shopkeepers sat on the steps of closed stalls, saying they were not allowed to reopen until May 1.

They protested what they saw as a double standard, with shops outside the bazaar working while they remain barred from reopening.

“How can I stay keep staying home? My family is hungry,” said Hamdollah Mahmoudi, 45, a shop worker in the bazaar.

“And one gets mentally sick without work”.

Morteza, 30, said he was unable to open his stall despite pressure from creditors.

“This is the second stage of coronavirus for me,” he said.

“I would be better off dead now.”

Hit by an outbreak of the Covid-19 illness that has now killed over 5,000 people and infected over 80,000 according to official figures, Iran shut down all non-essential economic activity in mid-March.

Some abroad and many inside Iran, including officials and health experts, have said the casualty figures may be higher than the official count.

But authorities now argue it is possible to battle the virus and reopen the economy at the same time with “smart social distancing” measures.

Businesses seeking to reopen have to register online with the health ministry and then receive guidelines for staying safe.

They are then given a QR code to print and show to officials inspecting their premises, said Jafari, adding that he had registered.

But he said he was sceptical officials could enforce sanitary guidelines, saying shopkeepers would don masks temporarily then relax when inspectors leave.

‘Forced to go back’

The decision to reopen “low-risk” businesses has drawn criticism from health experts and even some government officials, but President Hassan Rouhani has insisted “there is no other way”.

Iran’s economy has been battered by Washington’s re-imposition of crippling sanctions since 2018 — a situation compounded by plummeting global oil prices and shrinking tax revenues as the coronavirus lockdown took hold.

According to the International Monetary Fund, the Iranian economy shrank by 7.6 per cent in 2019 and is expected to contract a further 6 per cent this year.

But on Saturday, an AFP reporter saw an uptown clothing boutique doing a brisk trade, with masked and gloved assistants attending to customers without protective gear.

A bank clerk said her branch in northern Tehran had received more customers on Saturday than in recent weeks, mostly businessmen.

But Tehran residents interviewed by AFP talked both of economic distress and fear of catching the virus.

“Everyone was hoping for good sales this year, and now they’ve hit a brick wall,” said optometrist Kawan Ghane, who owns an eyewear shop in the city.

The 36-year old said he has not reopened yet, unsure whether customers will come and fearful of infection.

“It’s very scary examining someone, up close, who might be infected,” he said.

“But I’m forced to eventually go back because of my financial situation.”