No evidence antibody tests can show coronavirus immunity, warns WHO

No evidence antibody tests can show coronavirus immunity, warns WHO 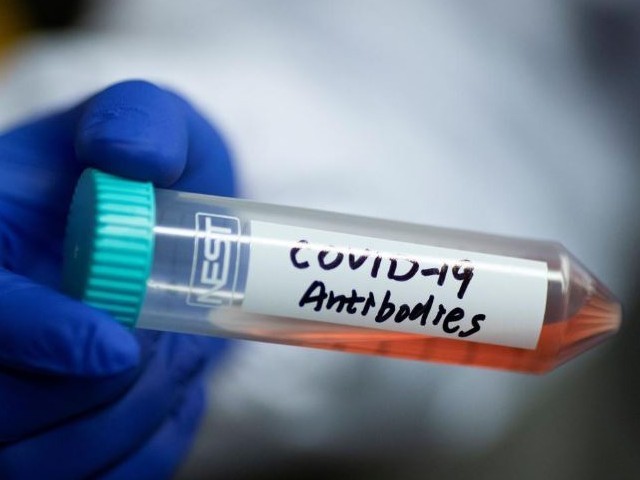 A scientist shows a tube with a solution containing COVID-19 antibodies in his lab where he works on research into novel coronavirus disease (COVID-19) antibodies for possible use in a drug at Tsinghua University's Research Center for Public Health in Beijing, China. PHOTO: REUTERS

GENEVA: The World Health Organisation is not sure whether the presence of antibodies in blood gives full protection against reinfection with the new coronavirus, Mike Ryan, the WHO’s top emergencies expert, told a briefing on Friday.

Ryan also said that even if antibodies were effective there was little sign that large numbers of people had developed them and were beginning to offer so-called “herd immunity” to the broader population.

“A lot of preliminary information coming to us right now would suggest quite a low percentage of the population have seroconverted (to produce antibodies),” he said.

“The expectation that … the majority in society may have developed antibodies, the general evidence is pointing against that, so it may not solve the problem of governments.”

Recovery from coronavirus may not confer immunity, warn experts

Ryan said scientists are also still determining the length of protection antibodies might give a person who has been infected with the coronavirus.

“Nobody is sure whether someone with antibodies is fully protected against having the disease or being exposed again,” he said.

“Plus some of the tests have issues with sensitivity,” he added. “They may give a false negative result.”

Professor of immunology in the public hospital system in Marseilles explained that being immunised means that you have developed an immune response against a virus such that you can repulse it.

“Our immune systems remember, which normally prevents you from being infected by the same virus later on.”

For some viral diseases such as measles, overcoming the sickness confers immunity for life.

But for RNA-based viruses such as Sars-Cov-2 — the scientific name for the bug that causes the Covid-19 disease — it takes about three weeks to build up a sufficient quantity of antibodies, and even then they may provide protection for only a few months, Vivier told AFP.

At least that is the theory. In reality, the new coronavirus has thrown up one surprise after another, to the point where virologists and epidemiologists are sure of very little.

The novel coronavirus, medically named SARS-CoV-2, has infected more than two million people across the globe since its outbreak in the central China city of Wuhan towards the end of December 2019.

The Chinese government has successfully subdued the outbreak in the epicentre through unprecedented measures, but the contagion is spreading like wildfire elsewhere in the world.