Presid­ent Rouhan­i says due to health and social protoc­ols, it is not possib­le to hold a parade of soldie­rs
By Reuters
Published: April 17, 2020
Tweet Email 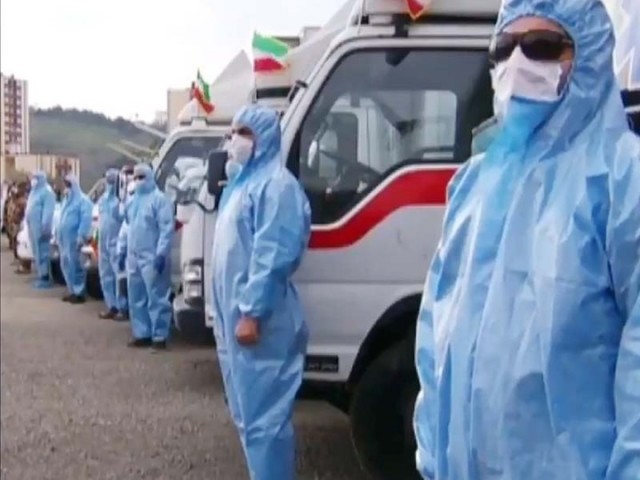 President Rouhani says due to health and social protocols, it is not possible to hold a parade of soldiers. SCREENGRAB

DUBAI: Iran on Friday paraded disinfection vehicles, mobile hospitals and other medical equipment to mark its national Army Day as the country’s death toll from the coronavirus outbreak rose by 89 to 4,958.

The total number of cases of infection in the Middle East country hardest hit by the pandemic rose to 79,494, of which 3,563 were in critical condition, health ministry spokesperson Kianush Jahanpur said on state television.

A parliamentary report released earlier this week said the coronavirus death toll might be almost double the figures announced by the health ministry, and the number of infections eight to 10 times more given a lack of widespread testing.

Friday’s small “Defenders of the Homeland, Helpers of Health” army parade was held at a training centre before a group of commanders in face masks to underscore the military’s role in battling the highly infections COVID-19 lung disease.

It was a far cry from the typical Army Day parades, which normally feature spectacles of infantry, missiles, submarines and armoured vehicles, with warplanes flying overhead.

“Due to health and social protocols, it is not possible to hold a parade of soldiers…The enemy now is hidden and doctors and nurses are (instead0 at the frontlines of the battlefield,” President Hassan Rouhani said in a message to soldiers, disseminated by state media.

Army forces chief Major General Abdolrahim Mousavi thanked the more than 11,000 military medical staff fighting to stem the spread of the novel coronavirus in Iran, which has one of the world’s highest death tolls.

“We have to get used to living with the virus until an appropriate medication or vaccination is found,” Harirchi said on state TV on Friday. A recent resumption of “low-risk” business activities “doesn’t mean that conditions have returned to normal,” he said, warning that the easing of restrictions could lead to increased infections.

So-called low-risk businesses – including many shops, factories and workshops – resumed operations on April 11 across the country, with the exception of the capital Tehran, where they will reopen from Saturday.

According to a recent opinion poll, 40 per cent of residents in the greater Tehran region do not take the coronavirus seriously, the head of the government-led Coronavirus Taskforce of Tehran, Alireza Zali, said on Friday.