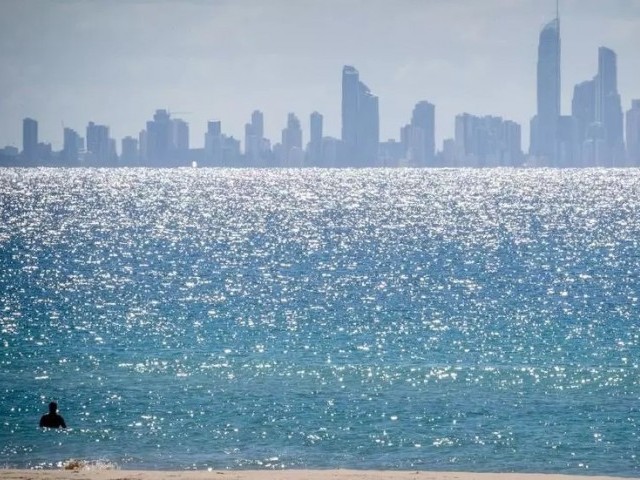 COOLANGATTA: A state border that bisects Australia’s neighbouring beachside towns of Coolangatta and Tweed Heads has rarely troubled locals, long accustomed to crossing the invisible line daily for coffee or a surf.

But as Australia began shutting down last month in response to the coronavirus outbreak, Queensland closed its border to badly hit New South Wales (NSW) state for the first time since the Spanish Flu pandemic a century ago.

Concrete barriers sprung up across suburban streets — dividing friends, families and even neighbours on roads where some people can’t leave their homes without crossing state lines.

WHO declares chloroquine made by 9 companies counterfeit

The community’s reaction to being cut in two was “one of shock”, said Dean Saul, who owns a cafe in Queensland but lives over the border in NSW.

“Not in any of our lifetimes have we thought that this (would happen),” he added.

The border closure means the intertwined ‘twin towns’ at the southern end of the Gold Coast are now dotted with checkpoints manned by police and soldiers.

While all Australians have been urged to stay at home, residents of Tweed Heads in NSW now cannot cross into Queensland’s Coolangatta unless they work there or have an essential reason to do so.

Coolangatta resident Amy Jobson, 31, said it was “crazy” to see the army stopping vehicles driving through the laid-back seaside towns, which usually function as a single community and whose beaches attract throngs of tourists.

“I completely understand why it’s happening… but for somebody who’s lived here their whole life, it’s very strange to have those barriers across places you cross every day,” she said.

Announcing the new restrictions on March 24, Queensland Premier Annastacia Palaszczuk said they were “not directed at our border communities who cross to shop or work, attend medical appointments and return to their homes”.

Local residents on both sides with a valid reason to cross into Queensland have been granted permits allowing them to avoid being turned away at the border — as hundreds of people were over Easter — or having to undergo a mandatory 14-day quarantine on arrival.

“(I’m) always a bit anxious having to cross the border and prove what you’re doing but… if you’ve got the permit in your window it’s quite easy to cross,” said Jobson, who owns a mechanic repair shop in Tweed Heads.

Gold Coast councillor Gail O’Neill said many locals had found the initial messaging “confusing”, but most were now complying with the rules — even surfers who usually go out of their way to chase the best waves.

In scenes echoed countrywide, most of Coolangatta’s shops, restaurants and all pubs are closed due to the coronavirus shutdown, forcing thousands out of work.

Dean Saul and his wife, Lisa, have kept open their Cafe Kirra but seen revenue plummet by 70 per cent as tourists stay away — a situation exacerbated by being cut off from NSW-based regulars.

“We’ve had contact via social media just saying ‘We’re so sorry, we can’t come. All the best, see you when the border opens’,” he said.

It is unclear the extent to which the border closure alone has helped prevent the spread of COVID-19 in Queensland, which now has 1,001 cases and four deaths.

NSW has almost three times as many cases and 26 deaths — accounting for almost half the national total — but also a much bigger population.

Overall new cases in Australia have slowed to a trickle but authorities say strict movement and gathering restrictions will remain for at least a month, warning that lifting them too quickly could lead to another spike in numbers.

That has left the twin towns facing the possibility of being cleaved in two for a prolonged period.

But many are taking it in their stride.

“We live in a lovely place; there are worse places — it’s nice to be here where we live and participate in that community spirit, and that will survive,” Saul said.

“Everyone’s got a little smile on their face, even though things are pretty grim.”