Japan urges citizens to isolate as reports warn of 400,000 deaths

Japan urges citizens to isolate as reports warn of 400,000 deaths 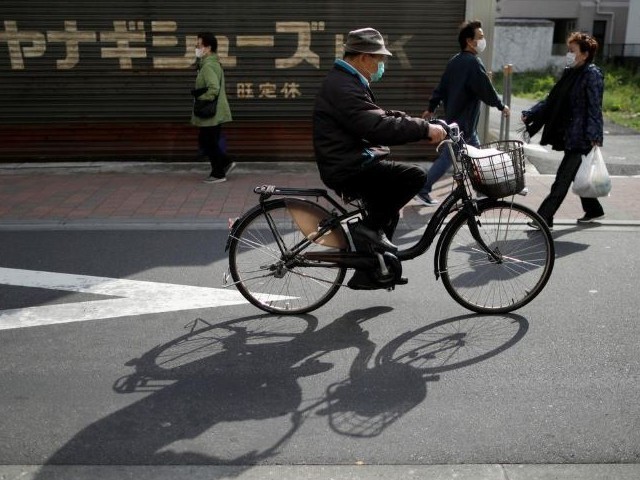 People wearing protective face masks walk on the street after the government announced state of emergency for the capital and some prefectures following the coronavirus disease (COVID-19) outbreak at Sugamo district, an area popular among the Japanese elderly, in Tokyo. PHOTO: REUTERS

TOKYO: Japan urged its citizens on Wednesday to stay home, as media reports warned that as many as 400,000 of them could die of the coronavirus without urgent action, and Prime Minister Shinzo Abe came under pressure to hand out more cash.

Japan, which tests only people with symptoms of the coronavirus, has so far recorded more than 9,000 infections, including a passenger who caught the virus on a cruise ship, with nearly 200 deaths.

Reports in Japanese media citing an undisclosed health ministry projection said fatalities could reach the 400,000-mark without mitigation measures. It also estimated that as many as 850,000 people could need ventilators.

Japan has seen an accelerating infection rate in recent weeks, particularly in Tokyo. The government has responded by declaring an emergency in Tokyo and six other areas including Osaka, and a goal to cut interactions between people by 70 per cent.

The measures include a request that people isolate and businesses close, although there are no fines or penalties to force compliance. The government spokesman, Chief Cabinet Secretary Yoshihide Suga, urged people to do everything in their power to help the government reach its target.

Japan’s capital on Wednesday announced 127 new cases, with at least 327 nationwide, according to Kyodo newswire.

A lawmaker, Takashi Takai, was forced to resign from the main opposition Constitutional Democratic Party of Japan on Wednesday, after media reported he had visited a bar in Tokyo’s Kabukicho red light district despite the call to stay at home.

As Suga was calling for cooperation, his boss Prime Minister Shinzo Abe was coming under pressure to add a 100,000 yen ($935) payment to every citizen on top of a $1 trillion economic stimulus package that includes a 300,000 yen payment to households whose income has fallen because of the pandemic.

“I’ve urged the prime minister to make a decision and send a strong message of solidarity to the public,” Natsuo Yamaguchi, head of the Komeito party, the junior partner in the ruling coalition, told reporters after meeting Abe.

Speaking at his regular afternoon briefing, Suga said the government would consider further measures, but that for now it wanted “to extend help to households most affected.”

Japan’s coronavirus emergency economic stimulus will boost the country’s real gross domestic product by as much as 3.8%, the Cabinet Office said in a calculation released late on Wednesday.

Japan said earlier that the number of foreign visitors in March plummeted by 93 per cent compared to last year. Abe has identified tourism as an economic growth driver.

The US military extended a public health emergency to all of its bases in Japan. Since April 6, the emergency had applied only to the eastern Kanto region which includes Tokyo.

That health emergency, which affects the largest concentration of US military personnel in Asia, will remain in effect until May 15, more than a week beyond the planned May 6 end of the Japanese government’s emergency declaration. It gives commanders the authority to enforce compliance with health measures on anyone accessing US bases, including thousands of local residents who work as engineers and service personnel.

Abe will decide this weekend whether to extend the Japanese government’s emergency declaration after consulting with medical experts, according to two sources familiar with the matter who spoke to Reuters.

A key metric will be if new daily infections in Tokyo can be kept to around a hundred, the sources said. They asked not to be identified because they are not authorised to speak to the media.