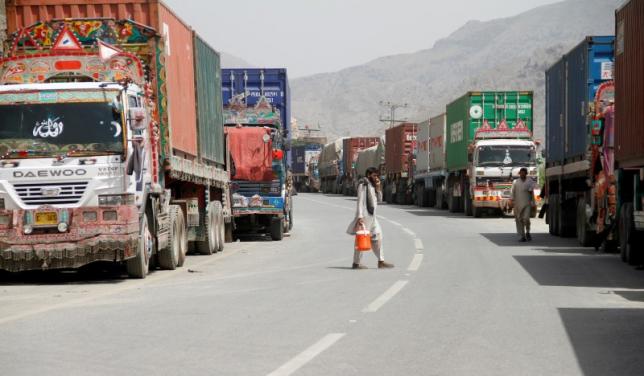 LANDI KOTAL: At least 2,000 Pakistanis, who have driven trucks into Afghanistan through the Torkham and Chaman borders recently, have demanded that the government take measures for their safe return.

The stranded drivers staged a protest near the Torkham border in Nangarhar province of Afghanistan, complaining that they have run out of essential resources and urged the government to make preparations for their repatriation.

Speaking to The Express Tribune via telephone, a driver Zahid Shinwari said that they have been stuck on the Afghan side of the border for over a month now.

Shinwari added the government had opened the border for Afghan nationals to return to their country, while trucks carrying goods were also allowed to cross, but no measures have been taken for their return to the country.

The drivers said they have parked their trucks in Afghanistan and have to pay rent to the parking lot which was exacting a toll on their thin wallets.

He added that even though the Afghan government has so far reported only 740 cases of the novel coronavirus (Covid-19) the situation in Afghanistan was far more serious than in Pakistan which has reported close to 6,000 cases.

They demanded of the federal government to direct the Pakistani Consulate in Nangarhar and Qandahar to provide them with food and shelter as they have been forced to take up accommodation in mosques and locals have been supporting them with food so far.

When asked, Khyber District Deputy Commissioner Mahmood Aslam said that they have made preparations for the repatriation of Pakistani nationals from Afghanistan, including essential food items, and other necessities for quarantine.