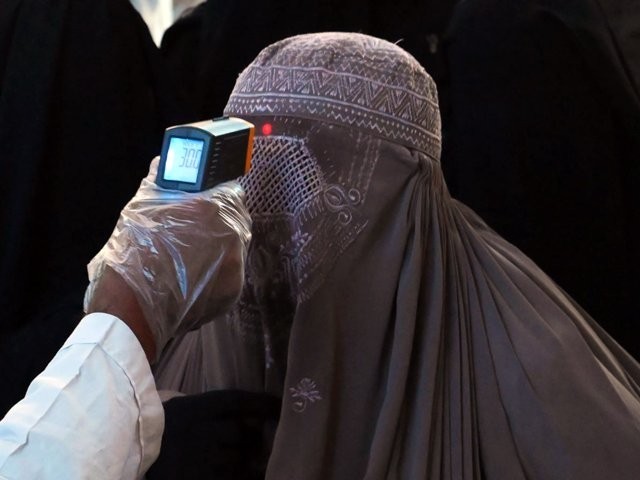 A health worker checks the body temperature of a burqa-clad woman passenger amid concerns over the spread of the novel coronavirus at the railway station in Lahore. PHOTO: AFP/FILE

LAHORE: There is a considerable gap in figures regarding suspected and confirmed cases of novel coronavirus compiled by the Punjab Emergency Service Rescue 1122, prison authorities and the primary and secondary health department.

Data of Rescue 1122 updated on Monday showed that the service had shifted 3,681 suspected and confirmed patients to hospitals and quarantine centres.

Rescue 1122 also claimed to have dealt with the burial of at least 36 suspected patients.

Of the shifted patients, 1,228 cases were confirmed, while 2453 were treated as suspected infections. The service shifted 2,695 people to hospitals and 986 to quarantine centres.

The service received 4,609 calls on Coronavirus Rescue Helpline 1190. Of the calls, about 1,700 were made to seek information.  As many as 722 calls were related to cough, 523 to fever, 114 to shortness of breath and the remaining to a combination of the symptoms.

However, data compiled by Punjab Primary and Secondary Health Department showed that there were 62 more confirmed cases reported in the province, raising the figure to 2,656. There are 89 prisoners among them.

Of the prisoners, 59 are from Camp Jail, 14 from Sialkot, seven from Gujranwala and nine from Dera Ghazi Khan.

The affected citizens include 445 from Lahore, 16 from Nankana Sahib, nine from Kasur, 10 from  Sheikhupura, 71 from Rawalpindi, 33 from Jhelum, four from Chakwal, 38 from Gujranwala, 29 from Sialkot, eight from Narowal, 136 from Gujrat, 12 from Hafizabad, eight from Mandi Bahauddin, 23 from Multan, 19 from Vehari, 31 from Faisalabad, eight from Chiniot, two from Toba Tek Singh, one from Jhang, 41 from Rahim Yar Khan, eight from Sargodha, 10 from Mianwali, four from Khushab, five from Bahawalnagar, six from Bahawalpur, three from Lodhran, 18 from  DG Khan and one each from Layyah, Okara, Attock  and Pakpattan.

Number of virus infected doctors rises to 17 in Punjab