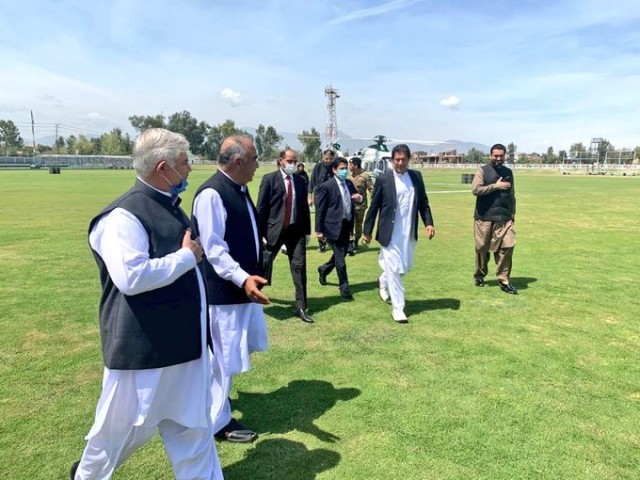 PESHAWAR: Prime Minister Imran Khan has said the whole government machinery is out to support and protect the medical community as well as the people, especially from hunger, in the war against coronavirus.

“I highly appreciate the efforts of doctors and paramedics as a frontline force in the war against the infectious corona disease and assure that the government will provide adequate safety gadgets to them on a priority basis,” Premier Imran said while talking to the media after visiting the Hayatabad Medical Complex on Friday.

The prime minister was on a daylong visit to Peshawar to oversee the arrangements made by the Khyber-Pakhtunkhwa government to fight the coronavirus pandemic. K-P Governor Shah Farman, Chief Minister Mehmood Khan, Federal Minister Asad Umar and Adviser to K-P Chief Minister Ajmal Wazir were present.

The premier said, “Great responsibility rests on the shoulders of the doctors and paramedics as an increasing trend is foreseen in the number of COVID-19 cases in the country.”

Imran asked the health professionals to “be ready for the impact”.

On shortage of personal protective equipment, he said, “A team of the National Disaster Management Authority is currently busy in procuring safety equipment and ventilators from China and other countries, from wherever possible, for the medical community.”

He said the government was making efforts to ensure availability of safety gadgets and medical equipment in the markets at affordable rates.

“The entire government machinery as well as the nation stand with the medical community and would provide them all kinds of support,” he vowed.

The premier said that the government was committed to protecting the poor people from starvation and effective measures were being taken in this regard.

During the meeting at the HMC, the prime minister was given a detailed briefing about the coronavirus situation in the province.

Imran appreciated the provincial government’s steps taken in the wake of the coronavirus pandemic, saying in the present situation, the focus of the government must also be on provision of relief to the weak and poor segments of society.

Imran directed the provincial governor, chief minister and relevant ministers to visit the corona-affected areas of the province and ensure provision of facilities there.

On the occasion, the premier was informed that 275 quarantine centres with the capacity to accommodate 18,000 patients had been established in the province.

He was further informed that 583 ventilators were available in the province and that their number was further being enhanced. Six hundred and thirty-nine regular doctors and 1,299 on contract have been recruited to meet the emergency.

In addition, 9,000 retired doctors, nurses and paramedical staff have agreed to offer their services which would be utilised when required. Four hundred response teams have been established in the province at the official level.

He was briefed by his Special Assistant on Social Protection and Poverty Alleviation Dr Sania Nishtar about the measures taken by the government for provision of financial assistance to the poor and vulnerable segments of the society in the province.

She said the distribution of Rs12,000 each to the deserving families under the Ehsaas Emergency Cash Programme had started across the country, including the K-P on April 9, under a transparent online mechanism.

Under the unprecedented relief programme in the social sector, the government would disburse some Rs144 billion among the poor and deserving families across the country.

Some 2.2 million poor families have been identified in K-P, who would be facilitated directly from the programme. Around 3,500 cash distribution points have been set up in all the 35 districts of the province. (With additional input from agencies)