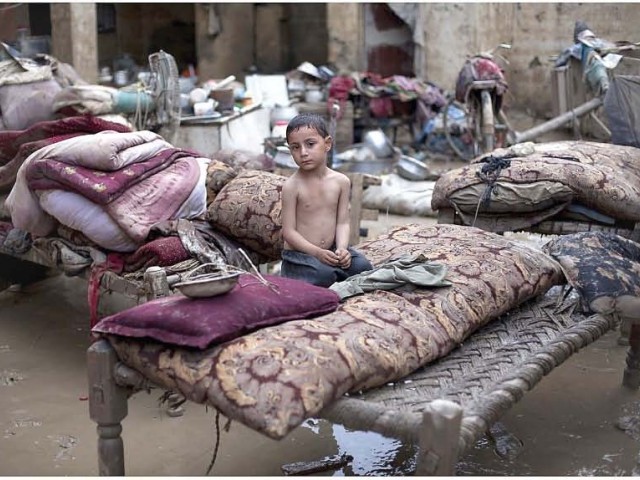 Inamullah, 4, sitting in his family courtyard hours after they returned to their home, as floodwaters started receding, in Nowshera, August 1, 2010; and (R) Inamullah, 5, posing for a portrait in the same courtyard almost a year after . PHOTOS: REUTERS

Echoing calls from Oxfam and other international humanitarian aid agencies, the United Nations also acknowledged on Thursday that Pakistan had made little progress on rehabilitation and reconstruction after last year’s massive floods.

“We certainly need to do more and keep up the momentum of the promises made a year ago,” said Rauf Engin Soysal, the UN secretary-general’s special envoy for assistance to Pakistan, at a press conference.

Soysal, who recently visited the flood-hit areas of Punjab where fresh monsoon rains have damaged 30 houses, said that Pakistan was still in the early recovery phase and was lagging behind in that as well.

But other UN officials, while conceding that the country had fallen behind schedule, said that Pakistan had entered the second phase. However, they were all in agreement that the country needs to pick up pace to move on to the reconstruction phase, which might require more funds.

“If we are lacking funds now and finding it difficult to meet targets, the country will suffer during the third phase of reconstruction,” said a UN official.

But the National Disaster Management Authority (NDMA) chief Dr Zafar Iqbal Qadir said that the government has been able to manage the disaster well with strong support from the international community and UN agencies.

“Initiatives such as the Watan Cards scheme were successful. As many as 1.96 million households received compensation through the scheme and the National Database and Registration Authority believes it will reach the remaining families this month,” Qadir said. However, he said, there is still a funding gap of around $413 million for the programme.

But according to sources in the UN, the government has indicated that in the event of another crisis, only some agencies will be invited for assistance instead of the humanitarian community as a whole. “The government simply does not want the humanitarian circus any longer. They want to work with a few, such as the World Food Programme, the UN refugee agency, the UN children’s fund and the World Health Organisation. The government claims to have huge stocks now,” a source said.

Some workers from international NGOs have also expressed great concern over not knowing clear roles of the Earthquake Reconstruction and Rehabilitation Authority (Erra), which has now been named the National Earthquake Reconstruction and Rehabilitation Authority (Nerra). There is also confusion about the roles and responsibilities of the NDMA and the various provincial disaster management authorities after passage of the 18th amendment.

But the government comes across as confident. “Every district is well prepared. They have an assessment of their losses and have stored sufficient stocks and made arrangements,” Qadir said.