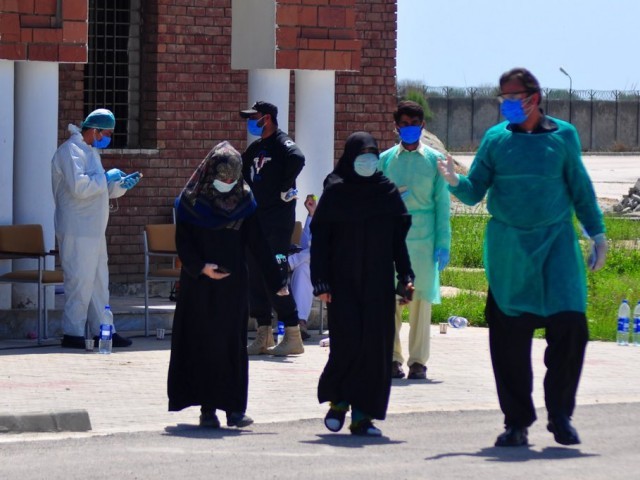 PESHAWAR / DI KHAN / LOWER DIR / MALAKAND / ABBOTTABAD / HARIPUR: Weeks after they were brought to the quarantine centres in Dera Ismail Khan from their temporary isolation in Taftan, the last group of 27 devotees returning from Iran left the facilities in the southern district of the province and headed home.

The landmark comes as the number of novel coronavirus (Covid-19) cases in Khyber-Pakhtunkhwa (K-P) soared to 620 while at least two more people died of the virus.

The administration at the Gomal Medical College in Dera Ismail Khan told The Express Tribune on Friday that as many as pilgrims, who had returned to the country from Iran, were interned there. The tests of this last group have now come back as negative. Having completed their mandatory 14 day quarantine period, they will be heading home to their native Parachinar. A mother and her child, who were waiting for their test results, have also departed for Kohat, the in-charge said.

Once they leave, he said that the quarantine centre will be thoroughly cleaned and disinfected.

The number of deaths due to coronavirus in the province surged to 22 on Friday after a Covid-19 patient died in Lower Dir and another in Malakand.

The Lower Dir district administration said that a Covid-19 patient hailing from Ribat area of Lower Dir had been admitted to the District Headquarters Hospital (DHQ). He was referred to Peshawar after he tested positive for the virus but he succumbed to it. This is the second fatality from the virus in the area so far.

Moreover, five close relatives of the deceased have so far tested negative for Covid-19.

Separately, Malakand recorded its first Covid-19 fatality. The deceased had been quarantined a few days ago at a quarantine facility in the area but died on Friday. Batkhela assistant commissioner and the team from the Town Municipal Administration (TMA) performed the victim’s burial ceremony as per the standard operating procedures in the Kakanai Khar area of the district.

Another man was reported to have perished in Swat. The elderly Ali Bakhsh from Khawazakhela had tested positive a few days ago during his internment at the local quarantine centre. Officials said that apart from Covid-19, he suffered from a range of ailments including diabetes, cardiac problems and blood pressure.

He was buried under the designed procedures.

Meanwhile, tests results of 18 members of the Tableeghi Jammat have arrived of which one has tested positive, the district health authorities told The Express Tribune.

Local police said that they have cordoned off the house where the women of the Tablighi Jammat were staying in the Bagh Wali area.

Separately, another Tableeghi Jammat member has reportedly tested positive in the Rural Health Centre (RHC) in Ghawriyawala area of Bannu on Friday. As many as seven members of the Jammat had arrived in the district on March 27 and they were tested by local authorities and one member tested positive while the tests of others came back negative.

However, local authorities have closed a mosque where they stayed. In Haripur, a former lawmaker of the Pakistan Muslim League-Nawaz (PML-N) Babar Nawaz has also tested positive for Covid-19.

The former parliamentarian had been suffering from fever and respiratory problems for a few days and was admitted to a local hospital. Swabs from his throat were shared with the National Institute of Health (NIH) in Islamabad which came back positive on Friday. He has been shifted to a quarantine centre while around 100 people who were in contact with him over the past few days have also been advised to get themselves tested for the virus.

The provincial government on Friday sanctioned Rs3.6 million for uplifting healthcare services and local government sustainability in the province.

The funds were approved during a meeting of the K-P Development Working Party (K-PDWP) on Friday. The meeting was chaired by the K-P Planning Department Additional Chief Secretary.

Three projects relating to health and local government worth Rs3.6 million were discussed and approved. Two projects nominated by the provincial government were sent back to their respective departments for rectification and rationalisation.