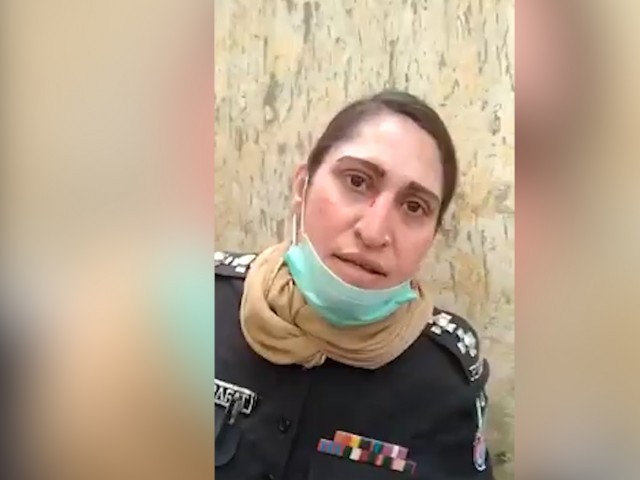 The officer in charge of the Pirabad police station, situated in the Orangi Town locality of Karachi, was attacked by a mob after law enforcers tried to enforce Friday prayer restrictions.

Sharafat Khan, the female SHO of the Pirabad police, reached the Haqqani Mosque in Frontier Colony after being informed that people were gathering there to offer Friday prayers, in violation of the restrictions on congregational prayers at mosques.

When she asked the people present at the mosque to pray at home, a group of individuals, enraged by the police action, began pelting her with stones. The police officer received minor injuries during the scuffle.

A video, now viral on social media, shows a large crowd exiting the mosque as some individuals engage in a heated argument with the SHO, who bears a bleeding nose.

“You people have attacked me and also damaged my glasses. A case will be lodged against you,” Khan can be heard saying in the video.

After more police officials reached the spot, the SHO instructed them make videos of all those present in order to initiate action against them.

Khan, appointed as the SHO of the Pirabad Police Station 10 days ago, has a reputation of bravery and outstanding performance.

Taking notice of the incident, a judicial magistrate directed the West DIG to take action against the culprits.

The police have registered a case against the mosque administration and unidentified men, under sections of the Anti-Terrorism Act as well as charges including attempted murder and vandalism.

Meanwhile, in most of the city, the Sindh government’s orders of a complete lockdown from noon to 3pm on Fridays were strictly enforced.

Utility stores, pharmacies and other shops selling essential goods – normally exempted from the lockdown – also remained closed during this time.

Various roads were barricaded, with Sharae Faisal, in particular, blocked off by large police contingents at several intersections. Defence Housing Authority, Clifton, Gulshan-e-Iqbal, Gulistan-e-Johar, Saddar, Tower, Mauripur, Quaidabad and Shah Latif Town all remained deserted, as the law enforcers sent citizens who ventured outside back to their homes.

However, doctors, paramedical staff and ambulances were allowed to freely move across the city.