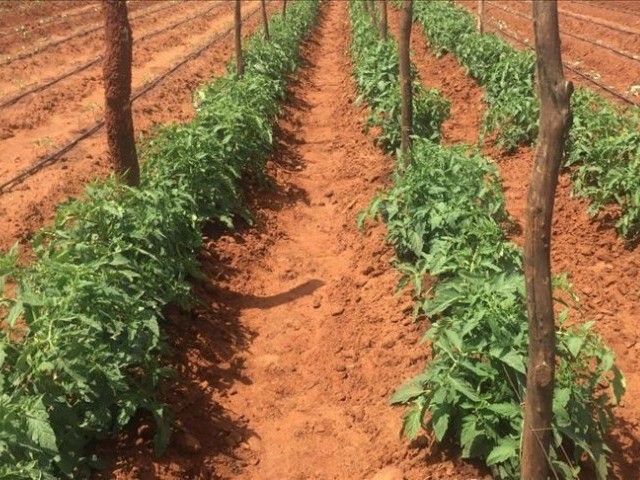 In the absence of labour and means of transportation due to lockdown to stem the spread of COVID-19 or coronavirus, millions of farmers are staring at another disaster, watching their produce rotting in their fields. PHOTO: AA

KARACHI / NEW DELHI: Trees have bent, bearing the load of ripened summer fruits and a bumper crop of wheat in a golden hue is ready for harvest in the fields, spread across the plains of Pakistan and India.

But in the absence of labour and means of transportation due to lockdown to stem the spread of COVID-19 or coronavirus, millions of farmers are staring at another disaster, watching their produce rotting in their fields.

The harvest of famed fruit of the region mango is also just a month away. Experts believe that the phenomenon will have cascading effects on the region’s food security.

Ahmad Ali, a farmer from Pakistan’s northeastern Punjab province, is running from pillar to post to arrange labour for the harvesting of wheat, which in his area is set to commence next week. He is one of the thousands of farmers, desperately looking for labour to harvest wheat, mainly in Punjab, and southern Sindh, the two bread-baskets for Pakistan.

Around 70% of Pakistan’s small farmers rely on traditional farm labourers, who come from the remote or the low-income areas before the harvesting season. They could not make it this time due to weeks-long lockdown.

“There is an acute shortage of labour here. I am completely clueless what to do,” said Ali, 37, who owns seven-acre farmland in Okara district located some 119 kilometres (74.3 miles) from Lahore, the provincial capital.

And, those who are available have shot up their rates.

Prime Minister Imran Khan, last week, announced the lifting of the ban on movement of transport and machinery for harvesting. The move, however, proved to be less practical.

“Most of our machinery needs repairs and overhauling every year around harvest season. The workshops remained closed,” Ali told Anadolu Agency on phone.

“Some workshops have reopened during the last four-five days [after prime minister’s order] but they cannot meet the workloads,” he added.

In nearby India, the situation is no different. Farmers in Punjab, Haryana, Madhya Pradesh, Rajasthan, and Gujarat — the key food basket states — are desperately looking for labour to harvest wheat and gram.

“Now is the time to harvest crops like wheat and gram, while the harvesting season for mustard is already over. But there is no labour available,” Surendra Singh Bhati, a small farmer, told Anadolu Agency.

No means to transport the crop to markets

Even those farmers, who have harvested their crops taking help from their relatives and neighbours are not able to sell the produce in the absence of transportation.

Apart from wheat, heaps of plucked vegetables are lying in the fields in different states, shattering the hopes of farmers to get bumper profits this year.

“We cannot sell them [vegetables] due to the lockdown. No means of transport is available to take them to wholesale markets. We pluck cabbage, cauliflower, and other vegetables but are forced to feed them to the cattle,” Aakash Patel, a farmer from Sagar district of central Madhya Pradesh state, told Anadolu Agency.

Reports coming from different parts of rural India suggest that the farmers are dumping fruits and vegetables outside their villages or feeding them to their cattle.

“On the one hand the prices of vegetables have decreased due to closure of hotels, restaurants, and banquets, on the other, the absence of transport due to lockdown is acting a double whammy. Even the transport available is costing us three times the actual cost,” Bhurgari told Anadolu Agency.

“We are left with no other option, but to leave the crops to rot in the fields,” said the angry farmer.

The governments in both the countries have also delayed procurement of crops from farmers, an annual exercise to a full-up buffer stock of food grains, which also acts as an incentive to farmers to ensure a minimum support price.

In India, the central government has asked the farmers to delay harvesting given the situation. Experts fear that the delay in the harvesting of crops, mainly wheat may lead to serious food security issues in the two nuclear neighbours, which together share 1.5 billion of the total world population.

Sachin Kumar Jain, an adviser to the Indian supreme court-appointed commission on the right to food campaign, described the situation “challenging” for the farmers. He said it had the potential to affect the food security of the world’s second-largest populated nation.

“Almost 55% of the Indian workforce comes from the agriculture sector. The present situation has brought the farm sector to a halt,” he told Anadolu Agency.

He noted that the delay in harvesting would affect the preparations for the next rain-fed crops, which would add to the already deteriorating situation.

“The area of cultivation for wheat has already reduced due to a combination of flawed government policies, and changing weather patterns in recent years. The delay in time-bound harvesting could destroy huge amounts of winter crops, particularly wheat, across the country,” said Chadhar.

Fear of contracting COVID-19 has also disrupted harvesting. “Several labourers have personally told me that they are scared of getting infected,” Chadhar said.

Pakistani students in Wuhan emerge from lockdown, far from home and with psychological scars