The star couple are the next to join the growin­g list of celebr­ities trying to ease COVID-19 devast­ation
By Entertainment Desk
Published: April 9, 2020
Tweet Email 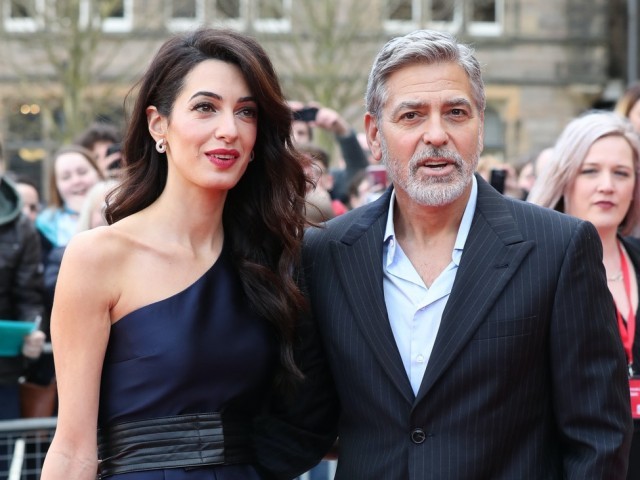 Hollywood star duo George and Amal Clooney are the next celebrities to make significant personal donations to ease the devastation the coronavirus pandemic has wrought.

Deadline reported that the Clooney’s have donated north of $1 million, targeted directly towards six areas in great need. They’ve donated $250,000 each to The Motion Picture and Television home — where Clooney is a board member — the SAG-AFTRA FUND, and Los Angeles Mayors Fund.

An additional $300,000 has also been provided to three international charities – Lebanese Food Bank, Lombardo Italy Region and the NHS. Amal, an internationally renowned human rights lawyer, was born in Lebanon.

Other celebrities to donate towards the coronavirus fight include Angelina Jolie, who pledged one million dollars to combat child hunger.

Oprah Winfrey announced on social media last week that she’s committing $1 million to America’s Food Fund to “support those facing food insecurity.” The star talk show host tweeted she believes the fund will be “a powerful way to make a difference for our neighbors in need.”

Gang back in da Stu!! @Edward_Enninful and I are back at it again with @StevenKleinStudio for the May 2020 cover of @BritishVogue ✊ available Friday, April 3rd! . Wearing all @Burberry by @RiccardoTisci17, and a custom @StephenJonesMillinery durag. Photographed by @StevenKleinStudio and styled by @Edward_Enninful, with hair by @YusefHairNYC and @NaphiisBeautifulHair, make-up by @IsamayaFfrench using @FentyBeauty and nails by @RedHotNails. With thanks to @JillDemling.

Winfrey didn’t stop there. She also revealed she’s donating even more to help those affected by COVID-19. Singer Rihanna’s Clara Lionel Foundation also donated a whopping five million dollars towards organisations in the US and around the world.

Supermodel Gisele Bündchen wasn’t satisfied with her marriage, so she wrote a letter