COVD-19 vaccine could be ready in six months: Oxford University

COVD-19 vaccine could be ready in six months: Oxford University

More than 500 volunt­eers in the UK aged betwee­n 18-55 have signed up for trial, will begin tests at the end of April
By Social Desk
Published: April 8, 2020
Tweet Email 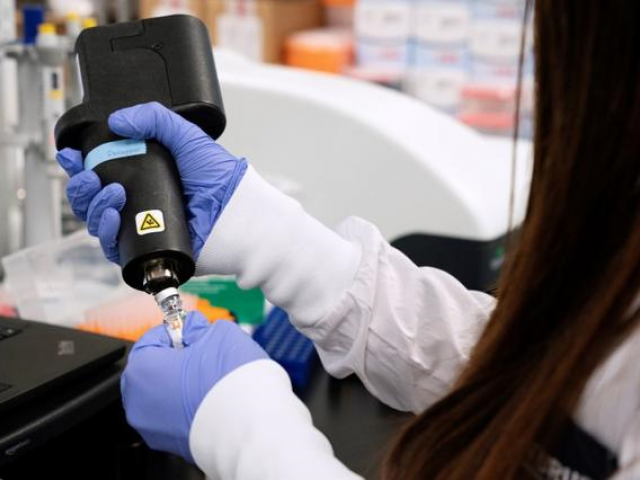 A file photo of a scientist at RNA medicines company Arcturus Therapeutics research a vaccine for the novel coronavirus (COVID-19) at a laboratory at San Diego, California, US, March 17, 2020. PHOTO: REUTERS

A coronavirus vaccine could be ready as early as six months, leading  Oxford University researchers behind a major trial in the UK say.

The researchers at the prestigious varsity are confident they can roll out a jab for the incurable disease within the next eight months.

This “best case scenario” is much sooner than was previously touted.

Britain’s chief scientific adviser said it would be at least 2021 until a vaccine was ready.

But the Oxford team, one of hundreds worldwide racing to develop a COVID-19 cure, warned it will be “challenging” if the outbreak peaks before a jab is ready for trials.

With no tests available to identify who has already been infected it could be difficult to find unexposed people to take part in the trial, the researchers say.

More than 500 volunteers aged between 18 and 55 have signed up to the trial and will begin tests towards the end of the month.

Modelling by researchers at the University of Washington predicts Britain will hit its peak on April 17. So far the virus has killed 7,100 and infected 55,000 in the country.

The researchers said: ‘The best-case scenario is that by the autumn of 2020 we have the results about the effectiveness of the vaccine from a phase three trial and the ability to manufacture large amounts of the vaccine.”

They admitted that this time frame was “highly ambitious” many things could get in the way of that target.

“At the moment it is not possible to identify who has already been infected, and if the virus is spreading quickly throughout the population it might be difficult to find unexposed people to take part in the trial.”

“Conducting trials after the peak subsides presents another problem, because so many people will have developed a natural immunity by then, and the amount of transmission will have dropped so that those who are still not immune will take longer to be exposed to the virus.”

And the scientists warned they were still struggling to get funding to scale-up production of the potential drug so it can be issued to the masses.

Trial participants will take part in the study for six months, during which they’ll attend appointments at the Oxford Vaccine Centre for screening and vaccination.

They will be injected with either the new COVID-19 vaccine or a control jab.

Sir Patrick Vallance, the UK’s chief scientific adviser, previously said a vaccine was 12 to 18 months away from being developed and distributed to the masses.