US death toll, now at more than 9,600 is rapidl­y closin­g in on Italy and Spain
By Reuters
Published: April 6, 2020
Tweet Email 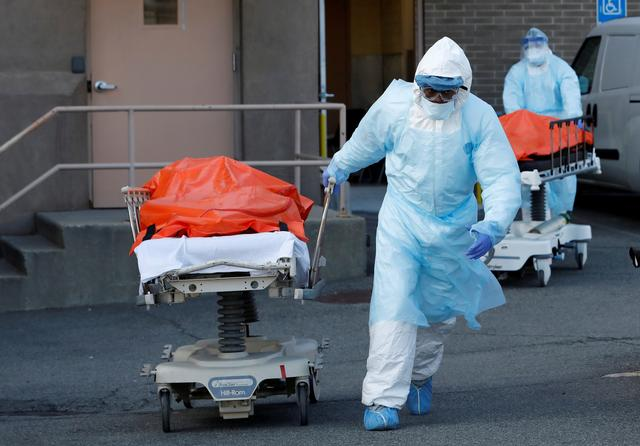 US death toll, now at more than 9,600 is rapidly closing in on Italy and Spain. PHOTO: REUTERS

WASHINGTON: The United States entered what an official called the “peak death week” of the coronavirus on Monday while a watchdog report said hospitals were struggling to maintain and expand capacity to care for infected patients.

The US death toll, now at more than 9,600, was rapidly closing in on Italy and Spain, the countries with the most fatalities to date at nearly 16,000 and about 12,500 respectively, according to a Reuters rally of official data.

He raised particular alarm for the states of New York, New Jersey, Connecticut and the city of Detroit.

Results of a national March 23-27 survey showed that “severe shortages” of testing supplies and long waits for test results were limiting the ability of hospitals to keep track of the health of staff and patients, the US Department of Health and Human Services Office of Inspector General said.

“Hospitals also described substantial challenges maintaining and expanding capacity to care for patients,” said the report, described as a snapshot of the issues hospitals faced in mid-March. Efforts were being made to address those issues, it said.

The survey, which included information from 323 hospitals, confirmed reports that shortages of beds, ventilators and protective gear were creating chaotic conditions, with patients, isolated from their families, dying alone.

Meanwhile, more than 90 per cent of Americans are under stay-at-home orders issued by state governors.