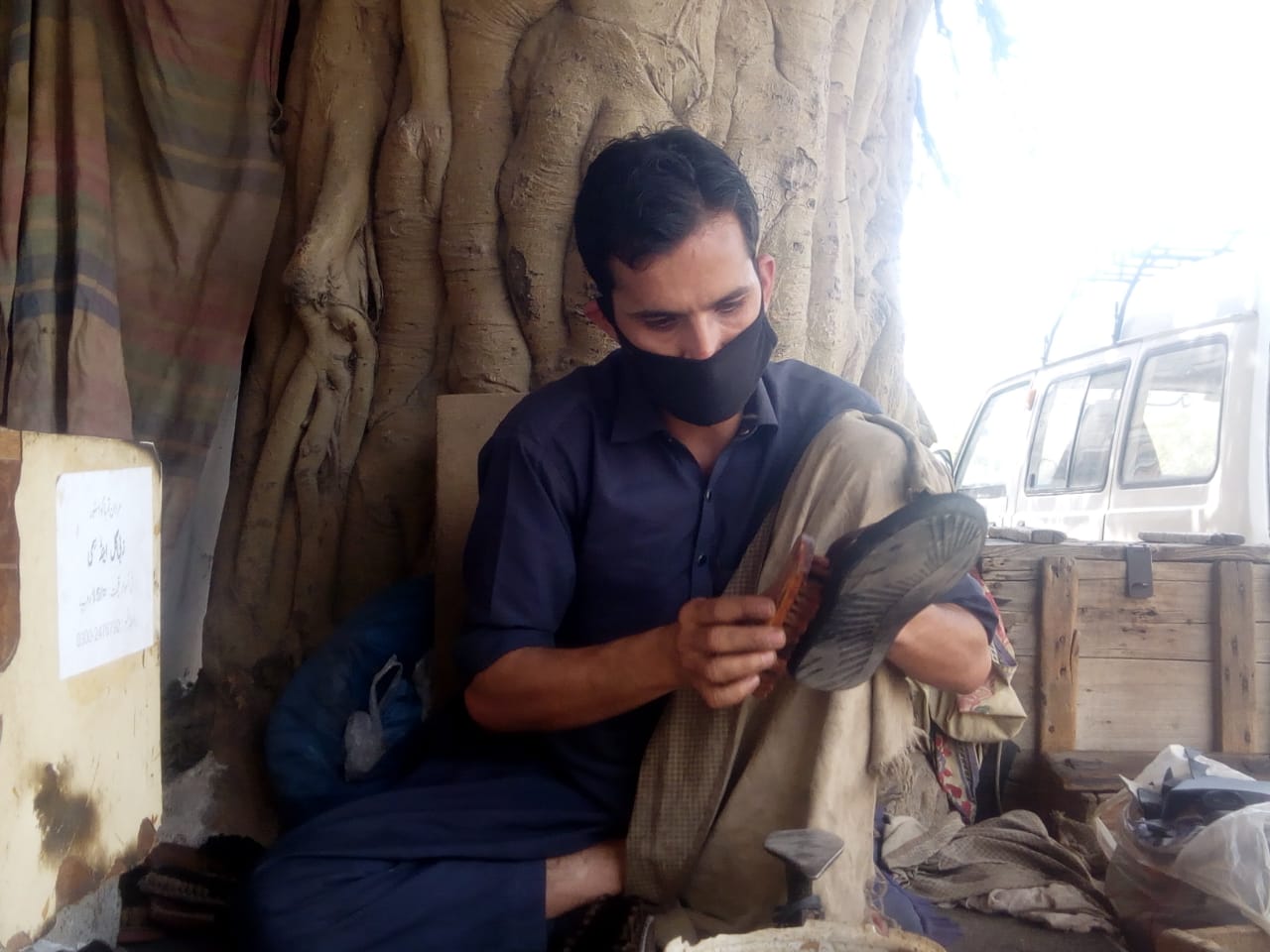 KARACHI: With global authorities scrambling to flatten the curve, Sindh government too has decided to extend the lockdown period for another 10 days as the national coronavirus tally balloons over 2,000 cases. However, where the decision comes as an attempt to mitigate the contagion risk, thousands of daily wage earners have been pushed to the breadline as all business activity comes to a halt in the country’s economic hub.

Taking one of the hardest hits from the provincial lockdown is Karachi’s cobbler community, which has been forced to shut over 95 shops citywide as business depletes.

“The majority of my customers were office-goers and schoolchildren who would come bright and early to get their boots polished. Later in the day, it would mostly be women who would come to get their sandals, bags and purses repaired. But now that schools and offices are shut and no one has anywhere to go, it’s like I have no customers left to cater to anymore,” lamented Ataullah, a cobbler who works under a neem tree in the city’s Federal Capital area.

With the suspension of business and no alternative means of income, many cobblers have been left with no other option but to return to their hometowns, while several others have switched trade to peddling Naswar or moist snuff – a business for which the city still offers a profitable market.

On the other hand, those who could neither return home nor switch trades have been pushed to the breadlines, compelled by starvation to queue for government rations and the donations of the wealthy.

According to Ataullah, there are approximately 15 to 20 cobblers in every union council of the city, most of whom belong to the Pashtun community and hail from Bajaur and adjoining areas.

The profession is passed on through generations and every family member spends at least six months working in the city before returning to their hometowns. Those who do not wish to return to the city can choose to award the business to a relative on contractual basis.

“We consider Karachi a mother to the poor, which is why we journey to the city in search of work. Most of us cobblers working here know each other and live in groups, which makes paying rent a little less taxing,” he shared.

Before the lockdown disrupted his business, Ataullah, like other cobblers in his area, would work 12 to 14 hours a day, seven days a week.

“I would charge anywhere between Rs10 to Rs100, depending on the work, which would earn me up to Rs 800 to Rs1000 a day. There was also an extra Rs200 a day that I would make by selling Naswar on the side, which would pay for my food expenses. However, with the cobblering business in shambles, I have to fully rely on peddling snuff around the city now.”

Per estimates, the provincial lockdown has affected up to 95 per cent of Karachi’s cobblers, while those who remain are left in dire straits, with little to do and less to eat.

“We don’t have families here, so we rely on cheap hotels and roadside stalls to buy food at least twice a day. Sometimes, when there’s enough ration and time, we even pool money to prepare a meal or two with our housemates. But now that everything is shut, we can’t even go to the hotel to get food and are forced to survive on little portions of milk and bread,” the cobbler lamented.

With schools and colleges closed across the province until April 14, cobblers feel a severe drop in business, as there no more bags to repair, shoes to polish or boots to mend.

“We would still get some customers until sometime ago, but as the threat of coronavirus has grown, women and children feel apprehensive about visiting cobblers on the streets,” explained Ataullah. “Those of us who could afford the ticket returned to their hometowns while the intercity bus services were still available, those like me who couldn’t are stuck here in despair.”

He added a request to the Prime Minister and those in power to prove rations to him and those like him discreetly in these difficult times.

However, where cobblers have been bearing the brunt of the lockdown, the situation has given way for another business to flourish.

Owing to the surge in prices of tobacco, consumers have created a new market for dry black Naswar.

“Ironically Naswar prices are likely to spike as well once the lockdown starts affecting its supply in the city,” asserted the cobbler. “For now, I have no choice but to rely on selling the tobacco snuff for a living but I still observe necessary precautions-I wear a mask and gloves while dealing with customers and ask people to do the same while keeping a distance.”