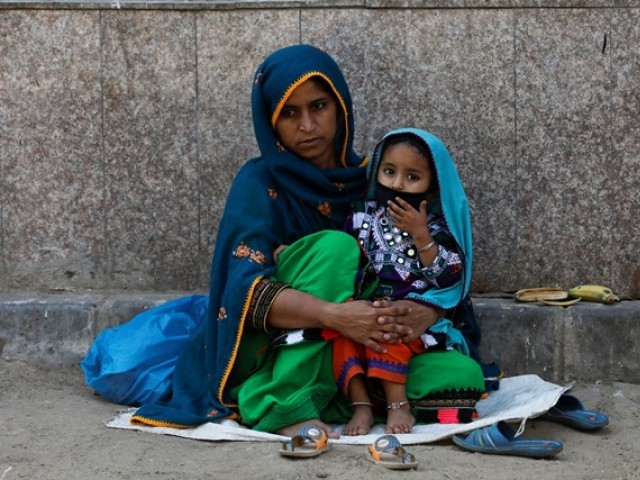 Three-year-old Nadia wears protective mask sitting on her mother's lap, as they are waiting to visit an ailing family member, outside a hospital during a lockdown after Pakistan shut all markets, public places and discouraged large gatherings amid an outbreak of coronavirus disease (COVID-19), in Karachi. PHOTO: REUTERS

LAHORE: Though the partial lockdown is helping the authorities to contain further spread of coronavirus (COVID-19), incapability of the state machinery to feed the poor and the daily wagers has started taking a serious toll on the poverty-stricken strata of the society.

Surveys of different areas in the provincial capital showed that in every other street daily wage labourers are roaming in search of work or help amid lockdown because the government has failed to help these daily wagers who were earning their livelihood before the lockdown.

A labourer, Ramzan, told The Express Tribune that he worked as a helper with a mason before the lockdown. “The lockdown is hitting hard for people like me. All our savings have been wiped away. We have no ration in our homes. We have no food or milk for our children. The landlord is demanding rent as the new month has started,” he said while narrating his ordeal.

“We have been hearing that both the federal and provincial governments have announced relief packages worth billions of rupees but we have little hope that this amount will reach the poor and deserving,” he lamented and added that he has been wandering in streets in search for work since the morning but in vain.

Responding to a question, a house painter who was carrying a used paintbrush and a few shade-cards, Muhammad Arshad, said that a large number of labourers were not registered with any government department. They work on a daily basis to earn their livelihood. “We have never claimed any benefit or sought help from the government so we have no record on government documents except the CNIC,” he pointed out.

“I have heard that the government has announced some relief packages for the poor but I am unaware of the procedure to seek help from the government. I am illiterate and know nothing about the mobile phone except for making and receiving a call. The government should introduce a labour- and illiterate-friendly mechanism for distribution of aid,” he said.

“Those who are sitting at the helm of government affairs know everything about their constituencies. They never fail to reach our doorsteps for votes but forget after coming into power, he said.

Similar depressing versions were told by several other citizens who were looking towards the government for assistance. They also stressed that the government should end this crushing lockdown instead of making tall claims of helping the poor.

“We can earn our livelihood without the government’s assistance if the government suspends this crushing lockdown,” Amjid, a labourer, said.

The misery of the poor and destitute does not end here. A large number of poor families, especially women, stormed towards Governor’s House to seek ration and assistance on Sunday. People started to gather at the main gate of Governor’s House on The Mall Road since wee hours as someone in their neighbourhood announced that the government will distribute ration among them in the morning.

A woman said that she came to know that the governor would distribute ration among the poor on Sunday.

“We have gathered here with great hope since there is no grocery left in our home. But now we have been told that the government has not announced any such plan,” she said with disappointment.

Angry families also protested over the unsympathetic attitude of the government. They shouted slogans against the government while demanding food and ration for their children.

When enquired from the Governor’s House officials, they claimed the governor had not made any such announcement. “Though the Governor House, in collaboration with philanthropists and business community, is working hard to help the people in this difficult situation we cannot distribute ration at the main gate of the estate. It will negatively impact the government’s efforts of social distancing,” the spokesman said.

An official said Punjab Governor Chaudhry Sarwar was aware of the ugly situation that was created owing to the protest of the poor families gathered outside the Governor House. He indicated that the governor has directed his staff to note down credentials of these families and make arrangements for distribution of ration at their doorstep through local leadership of the Pakistan Tehreek-e-Insaf (PTI).

Besides the labourers and the poor, the opposition is also criticising the government for not helping citizens in this difficult situation. Jamat-e-Islami Pakistan chief Sirajul Haq said the government was making false announcement daily but it failed to give a single penny to the poor. He said if the situation persisted, the poor would die of hunger if saved from the viral disease. He also demanded that the government ensure availability of essential commodities at the Utility Stores.