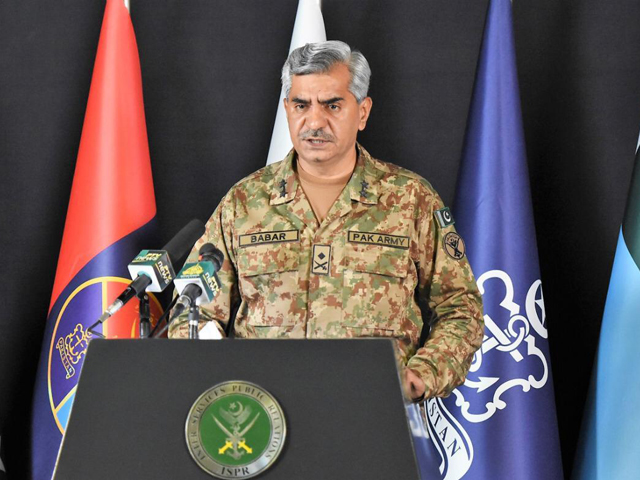 ISLAMABAD: The military on Friday said the country could not afford an “indefinite” lockdown to flatten the coronavirus curve despite a spike in the number of infections.

“It is necessary to continue the delivery of essential requirements and services to combat the pandemic,” Inter-Services Public Relations (ISPR) Director General Maj Gen Babar Iftikhar said at a news conference after a meeting of the National Command Operation Centre (NCOC).
The military spokesperson clarified that the NCOC worked under the National Coordination Committee (NCC), which was headed by Prime Minister Imran Khan.
He added that Federal Planning and Development Minister Asad Umar headed the NCOC while Lt Gen Hamood Uz Zaman was appointed as its coordinator.
Sharing details of the NCOC meeting, the ISPR DG said it was chaired by PM Imran and army chief Gen Qamar Javed Bajwa and attended by key officials.
“The NCOC serves as a nerve centre to synergise the national effort. It has been formed to collect, analyse and collate information received from provinces and forward recommendations to the NCC so that the country’s political leadership can make timely decisions,” he explained.
“The NCOC is a one-window operation where important ministries and provinces have representation under one roof. Here, all information is received and forwarded,” he added.
“The bigger picture that emerges after utilising all resources available to the NCOC helps the authorities in providing necessary essential items to the provinces, Gilgit-Baltistan and Azad Jammu and Kashmir.”
The military spokesperson further said the decisions taken after the recommendations made by NCOC included isolation of areas that were identified as hotspots.
“It also helps us ascertain food, medical and equipment needed in targeted areas, and allows us to make time-sensitive decisions,” he added.
The ISPR DG said the armed forces are present across the country and utilising all resources to curb the spread of the virus. The army chief has directed the forces to provide relief to the people in this difficult time.
He added that all formation commanders were assisting the federal and provincial governments.
Maj Gen Babar noted that it was for the first time that the country was facing a crisis like the current pandemic.
“During the last 38 days, we as a nation have fought with full determination against this menace,” he said.
“The people of Pakistan have shown exemplary resilience in dealing with the coronavirus over the last three months.”
The ISPR DG said it was necessary for the people to cooperate with the state in such circumstances.
“We need to rise above caste, creed, colour, ethnicity and religion to fight the pandemic. We have to fight as a nation,” he added.
“As a good Muslim, it is one of our foremost responsibilities to keep others safe as well. You can do this by staying home.”
The military spokesperson paid special tribute to doctors, paramedics and security personnel, who were on the frontlines of the battle against Covid-19.
He thanked the media for its “objective reporting” on the situation. “We need the media’s complete cooperation to win the war against coronavirus. I am grateful to our media as it has been objective in its reporting and created awareness among the people.”
Maj Gen Babar also lauded the role of religious scholars for sending a message of unity to the nation in these testing times.
Special Assistant to the PM on Information and Broadcasting Dr Firdous Ashiq Awan, who was accompanying the ISPR DG, said that the prime minister has decided that the information ministry, along with the military spokesperson, would coordinate and brief the media on the coronavirus situation. “A strategy will be developed to coordinate with the media,” she added.
The PM’s aide said the premier had decided to strike a balance between “lockdown and hunger. “The prime minister has also ordered action against hoarders.”
Earlier in the day during his visit to the NCOC in Islamabad, the prime minister was briefed on the measures being taken to cope with the situation arising out of coronavirus crisis.
Federal Minister Asad Umar and NCOC Operations and Planning DG Maj Gen Asif Mehmood Goraya informed the premier about the latest situation and future course of action to contain the spread of the highly contagious disease.
Army chief Gen Qamar, federal ministers and other officials were also present during the visit.
PM Imran directed the NCOC to focus on health management, financial impact, socio-economic and food security, strategic communication and awareness to deal with the crisis.
He also suggested a calibrated and measured response paradigm with the evolving scenario in the wake of the global pandemic.
The prime minister appreciated the performance of NCOC, saying: “We need to render untiring efforts for effective enforcement of the decisions through NCOC to contain the outbreak of COVID-19 across the country.”
He reiterated that there must be no compromise on availability of essential food items and sustainability of supply lines throughout the country.
Premier Imran stressed on the need to prioritise the efforts and enforce the decisions of the NCOC through regular and timely meetings under the leadership of Umar.
“Hoarders and smugglers will be made an example,” he warned.