No congregations at most mosques in twin cities

No congregations at most mosques in twin cities

Cases in Rawalp­indi rise to 69; prices of goods fall
By ​ Our Correspondents
Published: April 4, 2020
Tweet Email 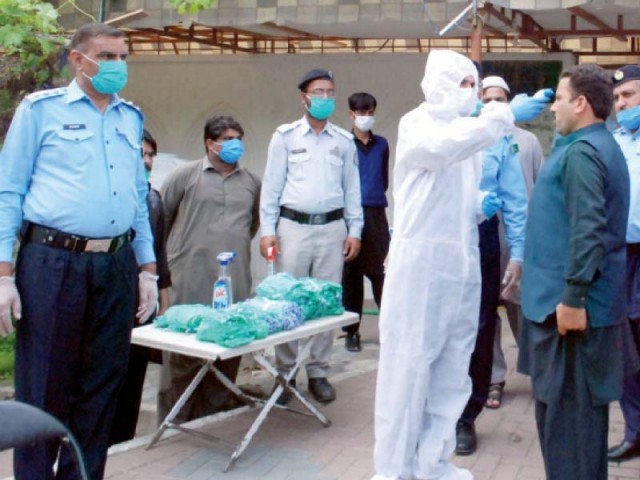 Police and health officials screen a man at a mosque in Islamabad. PHOTO: ZAFAR RAJA/EXPRESS

ISLAMABAD / RAWALPINDI: Most of the large (jamia) mosques in the twin cities of Islamabad and Rawalpindi remained bereft of worshipers on Friday, though there were reports that some congregations were held at smaller mosques.

This as Rawalpindi said that the number of positive novel coronavirus (Covid-19) cases in the division had soared to 69.

Most areas, particularly commercial centres in the two cities remained shut on Friday in wake of the lockdown imposed by the respective district governments.

Due to the strict security and checking, a large number of citizens could not offer Friday prayers in mosques. The district administration and police increased strictness and checking from 12pm to 3pm. Police had placed barriers on the routes headed to towards large mosques and Imambargahs while police vans and patrols were stationed near some of the well-known mosques.

Earlier, the district administration in both cities had advised against holding Friday congregation prayers apart from other congregations. Only the prayer leaders and other staff of the mosque, who number not more than five, have been allowed to pray inside the mosque while the public has been advised to pray at home. The move had been backed by the Ulema as well.

However, at some mosques, police allowed three to five people to enter the mosque for congregations but many others were turned away. But at smaller mosques, congregations were observed with the social distancing guidelines ignored.

The supply of flour, vegetable, fruit, fish, chicken and grocery items throughout the city has been restored but prices continued to drop.

However, the social distance guidelines were not strictly followed at shops which opened including stores for vegetables, fruit, meat, grocery, chicken, bakery, sweets and juices.

Many people could be seen standing shoulder-to-shoulder while shopping for essential commodities.

With the government allowing easy paisa, money changers, auto workshops, call centres to open, a rush was seen at these stores and establishments as well.

However, in some areas, the police force such stores to close even though the administration relaxed the ban.

Meanwhile, banks have begun to prevent all citizens from entering their branches without wearing a mask and sanitise their hands.

In Islamabad, the Islamabad Capital Territory Administration, in collaboration with the Markazi Anjuman Tajiran, has issued a list of some 31 superstores across the district where people can call and have groceries delivered to their homes.

The Rawalpindi district administration on Friday issued a detailed situation report about Covid-19 in the division.

The report said that there were 69 cases of Covid-19 in the district apart from 28 cases in Jehlum and a case in Attock.

However, no case has been reported in Chakwal yet.

So far, four people have died from the virus, including two in Rawalpindi and two in Jehlum.

Of those reported in the district, only two were cases locally transmitted cases while a majority of the cases consists of those people who recently arrived in Pakistan or preachers.

The report further noted that the first case in the district emerged on March 18 in a patient who had returned from Dubai.

Of those receiving treatment, the report said that 48 are admitted in the Rawalpindi Institute of Urology and Kidney Treatment (RIUKT), six patients have been quarantined in their houses, three have been sent to the POF Wah Factory Hospital, two patients are at the KRL Hospital, six patients were sent to the Pakistan Institute of Medical Sciences (Pims) in Islamabad, while another three patients are being treated at the Combined Military Hospital.

The third phase of chlorination and spray of disinfectants was completed in the federal capital on Friday, with rural areas of the city also sprayed.

The operation was carried out by the Islamabad Metropolitan Corporation (IMC), the Islamabad Capital Territory (ICT) District Administration and the Central Development Agency (CDA).

IMC Mayor Sheikh Anser Aziz oversaw the operation and directed teams also spray the streets of the city so that the city can be washed with chlorinated water.