The ultras' tight-knit struct­ures make it easier to organi­se sponta­neousl­y in times of crisis­
By AFP
Published: April 3, 2020
Tweet Email 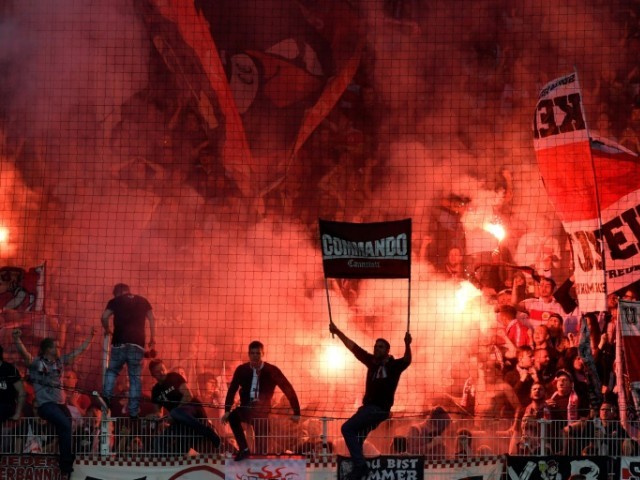 The ultras' tight-knit structures make it easier to organise spontaneously in times of crisis. PHOTO: AFP

When their side played promotion rivals Arminia Bielefeld in the German second division on March 9, Stuttgart fans did not realise that it would be the last game before the coronavirus lockdown.

A week later, football was suspended in Germany and Stuttgart’s “ultras” were focusing instead on helping the elderly and vulnerable during the health crisis.

“A lot of people are ready to put their own egos to one side and come together to help the community,” Clemens Knoedler of Stuttgart ultra group Schwabensturm told AFP.

“In the week after the Bielefeld game it became clear that something would change. We met up and asked ourselves what we were going to do.”

Along with other supporter groups across the country, Knoedler and his fellow ultras decided to mobilise in support of their local community.

Where he once led thousands of Stuttgart fans in cheering on their football team, Knoedler now organises around 80 volunteers to pick up groceries and prescription medicines for those who can’t leave their homes.

The project sprang up in a few days, and now encompasses six different districts in Stuttgart and the surrounding area.

“We are doing this for our city and our region. That is part of our self-understanding as ultras, that we are ready to help out where we can,” said Knoedler.

Known for their ferocious support and stadium protests, the “ultras” are the organised front of German football’s famous fan culture.

Earlier this year, ultra groups were slammed for tasteless protests against Hoffenheim club owner Dietmar Hopp, who was smeared as a “son of a bitch” in stadiums across the country.

Bayern Munich CEO Karl-Heinz Rummenigge referred to them then as “the ugly face” of football, but in recent weeks they have proved the opposite.

Fans at major clubs such as Borussia Dortmund and Schalke have also organised volunteer delivery services similar to the one in Stuttgart, while Bayern supporters have called for donations to food banks.

Since 2013, his own group have made annual donations to local causes such as a children’s charity and a homeless centre.

“We know that we are able to get relatively complex things going in a short space of time. On issues like social media production, telephone contacts and printing flyers…we have a pool of people to fall back on.”

Even so, he added, the sheer size of the volunteer network they have built up in the last few weeks is “new ground”.

Elsewhere in Germany, football fans have been making smaller contributions to the fight against coronavirus.

In cities across the country, ultras have hung up banners outside hospitals and supermarkets.

Normally used to display political protests or insult rival teams, the banners now bear messages of support for frontline workers in the crisis.

“You are heroes!” read one sign visible form the window of a hospital in Osnabruck.

Other supporters have joined together to save their teams from impending financial ruin, with clubs across the board struggling to stem the loss of matchday and TV revenues.

Meanwhile top-flight outfit Union Berlin have given fans the chance to buy virtual beers and sausages online, an idea which has also caught on at other clubs.

The fourth-tier club are selling tickets to an imaginary fixture against “Germany’s most hated club”: a certain “FC Corona Covid-19”.