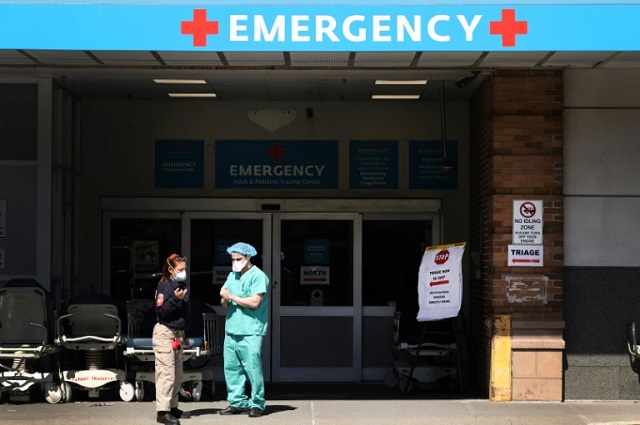 Medical workers wait for patients at Maimonides Medical Center in New York City -- but the coronavirus pandemic is a mental health emergency too. PHOTO: AFP

LOS ANGELES: The coronavirus pandemic has plunged the world into uncharted territory, leaving people feeling helpless in the face of an invisible threat of unknown duration that could infect any of us.

With uncertainty surrounding the outbreak deepening the economic, social and health care crisis, an army of therapists is helping people cope with the brutal psychological fallout.

“It’s the fear of the unknown as we’ve never had a situation like this before.”

She said Americans, like other people worldwide, are grieving profound loss on many levels as the pandemic continues its relentless deadly march around the globe.

“The only thing that we’ve experienced in America that’s come close to this pandemic is 9/11,” Lott said.

“And even then, we could run home and be together and hug each other. Now, even when we are home we shouldn’t be hugging.”

Holly Daniels, managing director of clinical affairs for the California Association of Marriage and Family Therapists, says there has been a surge in people seeking help.

There has also been an increase in the number of calls to suicide hotlines, though no statistics are available yet, added the psychotherapist, whose organisation represents 32,000 mental health professionals.

According to a poll released on Thursday by Kaiser Family Foundation, the virus has affected the mental health of nearly half of the people in the United States.

“‘Safer at home’ is a wonderful mandate for the coronavirus, but for a lot of individuals home is not a safe place,” Daniels said.

“The suicide rates are going to go up because people are alone and isolated and being at home is really an unsafe situation for them.”

She said therapists, who have had to shift sessions online amid infection concerns, are being extra vigilant to keep a close watch on vulnerable clients and are using social media to share resources and guidance.

Both Daniels and Lott said their key advice to patients struggling to cope is to stay grounded in the present and use meditation, exercise and online chats with friends and loved ones to ease anxiety.

Limiting exposure to the grim news on television and social media is another way to soothe the nerves, therapists say.

Despite the doom and gloom, Daniels said there are also positives to the pandemic, in that people are confronting emotional realities more than ever before.

“There is a feeling of increased intimacy with one another, of camaraderie,” she said.

“And so I’m hoping that this might be a time of an evolution in consciousness, that we might actually all come together in a way that we hadn’t before.

“I’m hoping that when this is all done that the positive outcome will be that we’re just a little more evolved emotionally and psychologically.”

Kent Toussaint, a California-based family therapist who works closely with kids and teens, said while anxiety among adults may be off the charts at this time, younger children seem to be handling the crisis better.

“Most of the kids I work with are less concerned about the virus, about getting infected,” said Toussaint, who heads the Teen Therapy Center.

“They’re more focused on how it’s impacting their daily lives.”

He said teens may be miffed at being cooped up at home and missing basketball practice or partying with friends, but younger children are enjoying the added attention that comes from having parents at home, along with less school work.

“The silver lining in this, oddly enough, is that kids are feeling less stressed with schoolwork because there is less of it… and then with their parents home, they’re finding more time to connect,” Toussaint said.

“So in this horrible situation the silver lining for some families is really positive.”