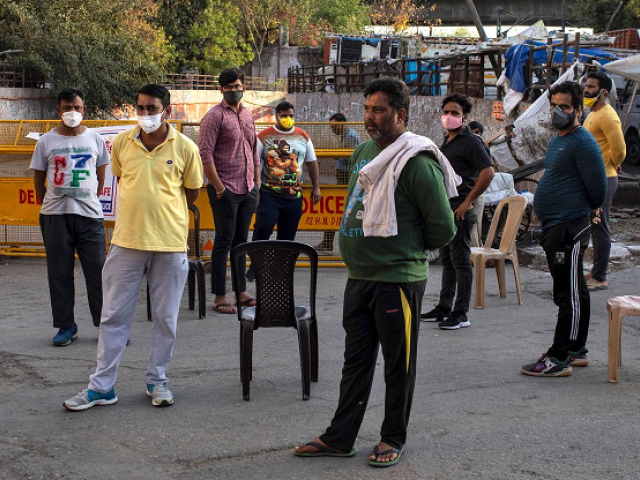 Residents stand guard next to the barricades which they have used for blocking the road connecting to Nizamuddin area where hundreds were taken away to be quarantined amid coronavirus disease (COVID-19) fears, in New Delhi, India, April 1, 2020. Picture taken April 1, 2020. PHOTO: REUTERS

NEW DELHI: It was late on Sunday night when officials in the southern Indian state of Andhra Pradesh received the alert. Federal authorities said they needed to track down more than 1,000 people linked to a large Muslim missionary gathering nearly 2,000 km away in the capital New Delhi.

Authorities in Andhra Pradesh, a region of about 50 million people, used cell phone towers, government databases and even village volunteers over the next five days to find almost everyone on the list — from attendees to the people they had been in close contact to fellow travellers.

The search is part of a nationwide manhunt for thousands of people linked to an outbreak of coronavirus at the headquarters of the Tablighi Jamaat group in a cramped corner of New Delhi, which is propelling a surge of cases in India, the world’s second most populous country after China.

“We have almost tracked everybody,” a senior Andhra Pradesh health official told Reuters.

Authorities have found and quarantined 9,000 people connected to the headquarters or their close contacts, India’s federal interior ministry said on Thursday. Officials from at least three states said they were looking for hundreds more linked to the Nizamuddin Markaz building, which serves as a hostel and center for missionary workers from all over the world.

The outbreak is the largest cluster reported in India, according to federal and state health department data. It presents a major challenge to the country of 1.3 billion people, where high population density and a rudimentary public health system risk undermining the fight against the disease that has killed tens of thousands of people worldwide.

With authorities concerned the outbreak has spread the virus across India, the incident has fanned communal tensions just weeks after Hindu-Muslim riots in the capital killed more than 50 this year.

More than 450 coronavirus cases and at least eight deaths have now already been linked to Tablighi Jamaat in India, according to data from state governments.

That accounts for about a fifth of the more than 2,000 infections reported by India’s federal health ministry, which has said there have been 53 deaths. More than 950,000 infections have been reported globally, according to a Reuters tally.

The group also held big gatherings in February and March that led to a mass outbreaks in Malaysia and Pakistan, respectively, according to officials in those countries.

A spokesperson for the Tablighi Jamaat group, Mujeeb ur Rehman, denied that the headquarters was a big source of India’s coronavirus cases: “India by then had already hundreds of cases. So, it will be wrong to say that Markaz was a major source of outbreak in the country.”

Tablighi Jamaat is an orthodox Islamic missionary movement with members across the world. Thousands of people from across Asia and elsewhere gather at its global headquarters in New Delhi’s densely-populated Nizamuddin West neighbourhood famous for its Sufi shrines and kebab stalls.

The six-story building includes large halls where prayers are held and sermons delivered. At night, it turns into sleeping quarters for 200-300 people on each floor, said one attendee from West Bengal state, who said he attends courses there twice a year and gave only his first name.

On March 13, two weeks after the group held a meeting in Malaysia that emerged as a source of hundreds of coronavirus cases across Southeast Asia, Tablighi Jamaat’s members gathered in New Delhi, including nearly 200 Indonesians and Malaysians, according to two top Tablighi leaders interviewed by Reuters.

The headquarters typically hosts between 2,000-4,000 people on most days, with events scheduled at least a year in advance, the two leaders said.

“We have a transparent system and we respect the rules of the country,” one of the leaders said.

On March 16, Delhi’s Chief Minister Arvind Kejriwal announced a ban on all gatherings of more than 50 people, except weddings, in an effort to contain the outbreak.

A New Delhi-wide lockdown began on March 23, followed by a national one starting March 25.

The group said it was able to move out around 1,500 people before the countrywide lockdown came into force, but that hundreds remained stranded inside. “After the lockdown was announced, it was impossible to further vacate the Markaz,” one of the Tablighi leaders said.

Mujeeb ur Rehman, the group’s spokesperson, confirmed that a conference was held between March 13 and 15. He added that most foreign attendees had arrived weeks before the event.

Indian officials first became concerned about the group’s Nizamuddin Markaz headquarters around March 18 after Indonesians linked to the group tested positive for COVID-19 – the disease caused by coronavirus – in the southern state of Telangana, according to a government source and an interior ministry letter dated March 28 reviewed by Reuters.

By March 21, India’s interior ministry sent details of the group’s foreign and Indian workers to all state governments to trace and test them, the ministry said in a statement.

At that time, officials estimated the group’s headquarters housed about 1,750 people, including 216 foreigners, the ministry statement said. Another 2,100 Indian and 800 foreign workers were scattered around the rest of the country.

About 370 people travelled from Tablighi Jamaat’s headquarters to Andhra Pradesh, according to a state government note reviewed by Reuters.

To locate them and people they had been in contact with – totaling more than 1,000 people in all – authorities fed names into multiple databases, including taxpayer lists, to find local addresses, the senior health official said. Then, police officers, municipal officials and village-level volunteers helped to track them down, the official added. A team of up to about 1,5000 people was involved in the whole process.

The government note, drafted on March 31, said state authorities had identified 1,321 people with the help of health officials, police and Indian railways.

Early this week, health officials began clearing the building of people and taking them to quarantine facilities in the capital. Guarded by paramilitary police, some clutched prayer beads as they were loaded onto buses. Delhi’s Health Minister Satyendra Jain said authorities moved 2,335 people.

But cases linked to the Nizamuddin Markaz have already been reported from as far away as the Himalayan Kashmir region in the far north to the remote Andaman and Nicobar Islands in the east and the rugged northeastern state of Assam, according to interviews with local officials and public data.

In Kashmir, a conference attendee who returned from Delhi on March 16, died 10 days later, becoming the first recorded fatality from the event, local officials said. Authorities in Kashmir are now monitoring more than 2,000 people who may have come into contact with those who tested positive after attending the Markaz, the officials said.

In the southern state of Tamil Nadu, 263 people – or about 85% of all coronavirus cases recorded in the state – are people who traveled to the Markaz, officials said on Thursday.

The case has also re-opened communal fault-lines in India, after months of the deadliest Hindu-Muslim riots to sweep through the capital city in decades.

On Wednesday, the Vishva Hindu Parishad, a hardline Hindu group linked to Modi’s ruling Bharatiya Janata Party, demanded stricter action against Tablighi Jamaat, describing their Delhi base as the “epicentre of (the) COVID-19 quake in India.” And anti-Muslim content and “#CoronaJihad” has been trending on social media in India as the sheer extent of the outbreak became apparent.

In Sarai Kale Khan, a religiously mixed neighbourhood bordering Nizamuddin, a group of men wielding sticks have barricaded the entrance to the area, trying to prevent people from entering.

“We will stay here until the government tells us it’s safe,” said one of the men, Ayush Vashishta. “There used to be a lot of contact. Now nobody can come.”

Explainer: How the coronavirus crisis is affecting food supply