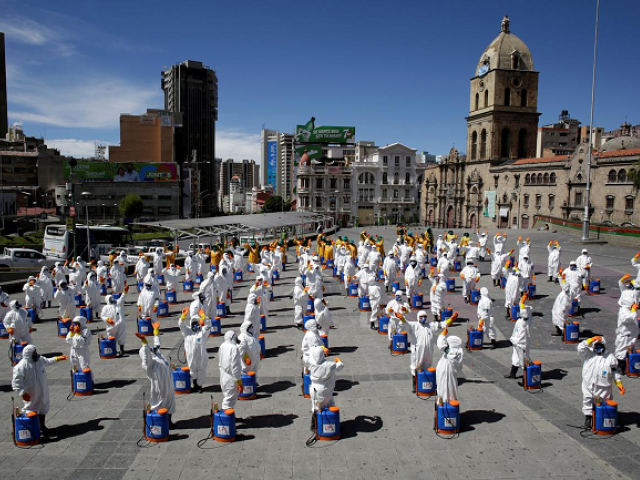 Global coronavirus cases surpassed 1 million on Thursday with more than 52,000 deaths as the pandemic further exploded in the United States and the death toll climbed in Spain and Italy, according to a Reuters tally of official data.

Since the virus was first recorded in China late last year, the pandemic has spread around the world, prompting governments to close businesses, ground airlines and order hundreds of millions of people to stay at home to try to slow the contagion.

Amid unprecedented government steps to prop up economies battered by the outbreak, US weekly jobless claims jumped to a record 6.6 million, double the record from the previous week. That reinforced economists’ views that the longest employment boom in US history probably ended in March, and that claims were expected to rise further.

Morgues and hospitals in New York City, the epicentre of the US outbreak, bent under the strain on Thursday, struggling to treat or bury casualties, as New York state’s Governor Andrew Cuomo offered a grim prediction the rest of the country would soon face the same misery.

Staff at one medical center in Brooklyn were seen disposing of their gowns and caps and other protective wear in a sidewalk trash can after wheeling bodies out of the hospital and loading them into a refrigerated truck.

In hard-hit Spain, the death toll rose to more than 10,000 on Thursday after a record 950 people died overnight, but health officials were encouraged by a slowdown in daily increases in infections and deaths.

Spain has shed jobs at a record pace since it went into lockdown to fight the coronavirus, social security data showed on Thursday, with some 900,000 workers having lost their jobs since mid-March.

Appearing for the first time since recovering from the virus himself, Britain’s health minister Matt Hancock promised a tenfold increase in the number of daily tests for the coronavirus by the end of the month after the government faced criticism for failing to roll out mass checks for health workers and the public.

Britain initially took a restrained approach to the outbreak but Prime Minister Boris Johnson, who tested positive for the virus himself, changed tack and imposed stringent social distancing measures after modeling showed a quarter of a million people in the country could die.

In Italy, which hit a daily peak of 6,557 new cases on March 21 and accounts for around 28% of all global fatalities, the death toll climbed to 13,915 on Thursday. But it was the fourth consecutive day in which the number of new cases stayed within a range of 4,050-4,782, seeming to confirm government hopes that the epidemic had hit a plateau.

Italy was the first Western country to introduce sweeping bans on movement and economic activity, having first confirmed the presence of coronavirus almost six weeks ago.

In Russia, President Vladimir Putin prolonged until April 30 a paid non-working period across the country, just a week after the Kremlin said there was no epidemic.

There has been particular concern about the spread of the virus in countries that are already struggling with insecurity and weakened health systems.

In Iraq, three doctors involved in the testing, a health ministry official and a senior political official said there were thousands of cases of COVID-19, many times more than it has publicly reported. The health ministry denied it.

In Latin America, Ecuador said it was building a “special camp” for coronavirus victims in the country’s largest city, Guayaquil, where more than 80 people have died.

Brazilian President Jair Bolsonaro further played down the pandemic, telling church ministers it is “not all it’s being made out to be” and denying that any hospital in the country had reached full capacity. But with his closest aides refusing to support his plan to relax coronavirus rules to keep the economy going, according to sources with knowledge of the dispute, Bolsonaro was looking increasingly isolated.

The first 100,000 cases worldwide of COVID-19, the respiratory disease caused by the coronavirus, were reported in around 55 days and the first 500,000 in 76 days, according to a Reuters tally based on official records.